DeLay may have done more to fuel the Texas Democratic comeback than anyone else. ‘It took somebody that really played the villain role,’ says [Matt] Angle.

[The following article appears in the September-October issue of Mother Jones .]

You could say that Matt Angle has something of a vendetta. He worked for Rep. Martin Frost — once the most powerful Texas Democrat in the U.S. House — for the bulk of his adult life, starting as an intern in 1981 and rising to become the lawmaker’s chief of staff. Angle even met his wife, Dolly, while working in Frost’s office.

Then one day about six years ago, both Angle and his boss found themselves out of work, courtesy of then-House majority leader Tom DeLay. The Texas Republican, known as “The Hammer,” had orchestrated a Machiavellian scheme to redraw the state’s congressional districts and banish Democrats from power. In 2004, Frost was one of four Texas Dems in the House picked off as a result.

Redistricting typically happens every 10 years, to capture the population changes recorded by the U.S. Census. In most of the country, state lawmakers ultimately decide how congressional district boundaries in their state are drawn.

DeLay’s plan entailed engineering a Republican takeover of the Texas statehouse by strategically funneling money into key legislative races using his political action committee, Texans for a Republican Majority (TRMPAC). Having won a majority in Austin in 2002, DeLay’s allies managed to ram through a redistricting plan in 2003, even though it was a non-Census year, alleging that the plan based on the 2000 Census results had unfairly favored the Democrats.

DeLay ultimately went down for his efforts — resigning from Congress in 2006 under indictment for illegally using corporate contributions to fund TRMPAC — but his scheme capped his party’s 40-year ascendancy in Texas, where the GOP has seized every lever of power in a state that was solidly blue for the prior century.

“A political crime had occurred,” Angle says gravely, arguing that the 2003 redistricting particularly disenfranchised minority voters — the heart of the Democratic base in Texas. So the 52-year-old operative has spent the past six years working to avenge DeLay’s power grab, devoting himself to helping Texas Democrats recapture the statehouse and governorship in time for the 2011 round of redistricting. 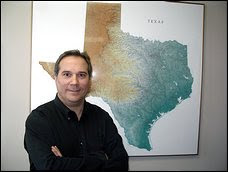 Matt Angle. Image from Washington Post.
To this end, Angle has co-opted elements of DeLay’s playbook, creating a small but well-funded network of political organizations to channel money — all legitimate, he hastens to point out — into statehouse races. The ultimate goal? To turn the reddest of red states blue.

Nationally, Democrats are executing similar strategies to win back majorities in swing states like Tennessee, Michigan, Missouri, and Oklahoma — majorities that, along with key governorships, give them the power to help redraw the map. But in Texas, success would be especially sweet — and now, their resources of cash, organizing, and optimism replenished, Texas Dems are presenting the biggest challenge the state’s GOP has faced in decades. Down 14 seats in 2004, they are currently within 3 of capturing a majority in the statehouse. They even have a shot at unseating GOP Gov. Rick Perry.

Much of this wouldn’t have been possible without Angle — and without the late Fred Baron, a Texas lawyer whose hefty donations to Democratic causes led some to dub him “the Texas George Soros.” Together, they created a state-based organization with a single clear mission: Help Democrats take Austin in five years.

Primarily bankrolled by Baron — who donated some $5 million — the Trust has raised nearly $12 million since its founding in 2005. State Rep. Jim Dunnam, the House Democratic Leader, remembers meeting with Baron shortly after the group launched. “He came in and said, ‘Y’all don’t worry — we’ll make sure the bill gets paid.'”

The Trust has since poured $1.3 million into Dunnam’s House Democratic Campaign Committee and $4.6 million into the Texas Democratic Party itself. The results speak for themselves: In 2006, Texas Democrats elected six new state reps and successfully protected the seats of all of their incumbents.

By 2008, they had picked up five more state House seats and made gains in the state Senate — and four of the state’s most populous counties swung blue in the presidential race for the first time since 1964.

Though his rich backers and insider status have allowed him to loom large, Angle has hardly been alone in helping Texas Democrats find their way out of the wilderness.

Annie’s List, which supports pro-choice Democratic women, has provided financing and staff support to two-thirds of the Texas Democratic lawmakers who’ve won since 2004. In the current election cycle, the state’s major progressive groups have thrown their resources behind at least seven Democratic challengers in swing districts.

Bolstered by such efforts, the Texas Democratic Party has gained new credibility after years of being written off. Its recent gains have even fueled speculation about when (not if) the state will flip blue in a presidential contest — perhaps as early as 2016, if you listen to the hopeful.

“If you had said before that Texas can be in play in five or six or seven years, they would have laughed you out of the room,” says Harold Cook, a political consultant who’s worked with Angle. “We’ve beaten them back.”

In retrospect, DeLay may have done more to fuel the Texas Democratic comeback than anyone else. “It took somebody that really played the villain role,” says Angle, pointing out that DeLay’s power grab motivated Texas Democrats to get their acts together.

It was a lesson Angle first learned in the years after the 1994 Republican takeover of Congress, when he served as executive director of the Democratic Congressional Campaign Committee (DCCC). “The thing that helped the Democrats was that [GOP House Speaker Newt] Gingrich made himself into the villain that they needed,” Angle says.

Working with the DCCC also helped connect Angle with the elite circle of Texas donors who’ve backed the Trust and its sister organizations: the Lone Star Project, an opposition research outfit originally launched to investigate DeLay, and an affiliated political action committee.

In addition to Baron and his wife, who’s donated more than $800,000 to the Trust since her husband’s death in 2008, Angle has tapped other high-powered contributors, including the cofounder of the Container Store.

Texas Republicans have seized upon Angle’s wealthy financiers to paint the Texas Democrats as an elite party backed by trial lawyers like Baron, who is best known for paying for John Edwards’ mistress, Rielle Hunter, to relocate during the presidential campaign.

“It can be an Achilles heel,” admits Mike Lavigne, a former executive director for the Texas Democratic Party. He also cautions that Texas Democrats may have become overly reliant on Angle’s well-funded operation. “The state party needs to be self-sufficient — they need to have the ability to raise money.”

Win or lose, the Trust’s five-year mission comes to an end following the midterms, and the state Democratic party is scrambling to prepare for the day when the money spigot runs dry. The party’s been working to make up the difference with small donors, says chairman Boyd Richie, though he admits, “We’re not 100 percent there yet.”

But for Texas Dems, there are more immediate concerns. They face the same political headwinds that have dampened Democratic expectations nationwide. If the party fails to win the governorship or boost its seat count, it could again find itself without a say as the GOP draws district lines in 2011.

As Angle and his allies work to erase DeLay’s gerrymandering legacy, they’ve been able to take some consolation in the fact that the highlight of the Hammer’s post-Congress career has consisted of an ill-fated appearance on Dancing With the Stars. But his ultimate comeuppance may arrive at the polls in November.

[Suzy Khimm is a reporter in the Washington bureau of Mother Jones. E-mail her with tips and ideas at skhimm@motherjones.com.]