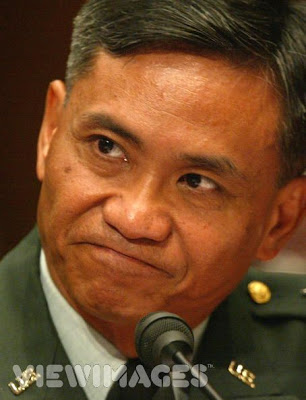 U.S. Army Maj. Gen. Antonio Taguba, now retired, author of an Army internal report on abuses at the Abu Ghraib prison near Baghdad, reacts as he testifies during a hearing before the Senate Armed Services Committee on Capitol Hill May 11, 2004 in Washington, DC. A Red Cross report claimed that as many as 90 percent of Iraqi prisoners were arrested by mistake. Photo by Alex Wong/Getty Images.
General who probed Abu Ghraib says
Bush officials committed war crimes
By Warren P. Strobel / June 19, 2008

WASHINGTON — The Army general who led the investigation into prisoner abuse at Iraq’s Abu Ghraib prison accused the Bush administration Wednesday of committing “war crimes” and called for those responsible to be held to account.

“After years of disclosures by government investigations, media accounts and reports from human rights organizations, there is no longer any doubt as to whether the current administration has committed war crimes,” Taguba wrote. “The only question that remains to be answered is whether those who ordered the use of torture will be held to account.”

Taguba, whose 2004 investigation documented chilling abuses at Abu Ghraib, is thought to be the most senior official to have accused the administration of war crimes. “The commander in chief and those under him authorized a systematic regime of torture,” he wrote.

A White House spokeswoman, Kate Starr, had no comment.

Taguba didn’t respond to a request for further comment relayed via a spokesman.

The group Physicians for Human Rights, which compiled the new report, described it as the most in-depth medical and psychological examination of former detainees to date.

Doctors and mental health experts examined 11 detainees held for long periods in the prison system that President Bush established after the 9-11 terrorist attacks. All of them eventually were released without charges.

The doctors and experts determined that the men had been subject to cruelties that ranged from isolation, sleep deprivation and hooding to electric shocks, beating and, in one case, being forced to drink urine.

“All credible allegations of abuse are thoroughly investigated and, if substantiated, those responsible are held accountable,” said Navy Cmdr. J.D. Gordon, a Pentagon spokesman. The Defense Department responds to concerns raised by the International Committee for the Red Cross, he said, which has access to detainees under military control.

“It adds little to the public discourse to draw sweeping conclusions based upon dubious allegations regarding remote medical assessments of former detainees, now far removed from detention,” Gordon said.

The physicians’ group said that its experts, who had experience studying torture’s effects, spent two days with each former captive and conducted intensive exams and interviews. They administered tests to detect exaggeration. In two of the 11 cases, the group was able to review medical records.

The report, “Broken Laws, Broken Lives,” concurs with a five-part McClatchy investigation of Guantanamo published this week. Among its findings were that abuses occurred — primarily at prisons in Afghanistan where detainees were held en route to Guantanamo — and that many of the prisoners were wrongly detained.

Also this week, a probe by the Senate Armed Services Committee revealed how senior Pentagon officials pushed for harsher interrogation methods over the objections of top military lawyers. Those methods later surfaced in Afghanistan and Iraq.

Former Defense Secretary Donald H. Rumsfeld didn’t specifically approve of the worst abuses, but neither he nor the White House enforced strict limits on how detainees would be treated.

There was no “bright line of abuse which could not be transgressed,” former Navy general counsel Alberto Mora told the Senate committee.

Leonard Rubenstein, the president of Physicians for Human Rights, said there was a direct connection between the Pentagon decisions and the abuses his group uncovered. “The result was a horrific stew of pain, degradation and … suffering,” he said.

Detainee abuse has been documented previously, in photos from Abu Ghraib, accounts by former detainees and their lawyers and a confidential report by the International Committee for the Red Cross that was leaked to the U.S. news media.

Of the 11 men evaluated in the Physicians for Human Rights report, four were detained in Afghanistan between late 2001 and early 2003, and later sent to Guantanamo. The remaining seven were detained in Iraq in 2003.

One of the Iraqis, identified by the pseudonym Laith, was arrested with his family at his Baghdad home in the early morning of Oct. 19, 2003. He was taken to a location where he was beaten, stripped to his underwear and threatened with execution, the report says.

“Laith” told the examiners he was then taken to a second site, where he was photographed in humiliating positions and given electric shocks to his genitals.

Finally, he was taken to Abu Ghraib, where he spent the first 35 to 40 days in isolation in a small cage, enduring being suspended in the cage and other “stress positions.”

The Physicians for Human Rights report.

McClatchy and other reporters are abruptly pulling the curtain away from the Bush team’s illegal practices in arresting people arbitrarily, declining to offer proof that they were guilty of anything, detaining them indefinitely without trial or charges, and deliberately torturing them to the extent of leaving long-term scars and disabilities. The torture practices originated not with lower-level officers but with Donald Rumsfeld and others in Bush’s inner circle, who then later blamed lower-level officials for developing the ideas that Rumsfeld ordered them to develop. Nothing they have done has survived a court challenge where one has been permitted.