Tangled Web : Tech and the Struggle in Iran 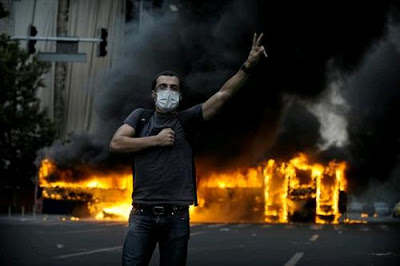 The War in Cyberspace
Web tangled in Iranian struggle

HUA HIN, Thailand — As Iranians attempt to come to terms with the outcome of their recent presidential elections, battle lines are being drawn in cyberspace. The combatants are the government in Tehran with its heavy-handed censorship of the Internet and media in one corner and the ever-increasing numbers of tech-savvy opposition supporters in the other.

Iran is up there with the likes of China, Vietnam, Thailand and North Korea when it comes to Internet censorship prowess, all of which have in recent years jailed Internet users and violated the rights of online free speech. Iran has more than 20 million Internet users, ranking the country second only to Israel in the Middle East in terms of the percentage of its population using the net.

Iran employs an advanced semantic filtering system in conjunction with an official committee responsible for identifying and reporting websites that violate the government’s stringent guidelines. These basically target all non-Islamic websites, women’s websites, and any that appear to be promoting Western cultural influences, such as movies and music. Every Internet service provider must be approved by both the Telecommunication Company of Iran and the Ministry of Culture and Islamic Guidance. An estimated 10 million websites have already been blocked, and that was before the recent elections.

The media clampdown intensified as everyone from foreign correspondents to Iranian students took to the Internet to spread the word and share the news as events unfolded on the streets of Tehran this week. Social networking websites such as Twitter, Facebook, MySpace, Flickr and YouTube have become the favored platforms of communication as tracking users on these is not an easy task. The government’s only option would be to follow in China’s footsteps and block the websites entirely, which it has done for a number of them.

The US government has taken an unusual step by calling on Twitter to delay scheduled maintenance, which would cause a temporary suspension of service and prevent Iranians sharing information. The move could highlight the Barack Obama administration’s acknowledgement of the power that social websites have in the organization of protests and the flow of information.

Internet users across the globe have pledged to help Iranians avoid detection and possible arrest by attempting to make it harder for the government to track them. By using proxy servers, they are able to change their web addresses or location settings to make it appear as if they are posting information from outside Iran. This gives the Iranian Internet police a tough job in tracking down the genuine bloggers living inside the country. Sympathizers are also setting up their own proxies to help Iranians bypass government filters.

Popular websites themselves have offered support by providing software and means to bypass the censors in Iran. The Pirate Bay, a high-traffic file sharing site has offered support by temporarily changing its name to Persian Bay and linking to a protest forum it helped to setup. The forum “aims to be a secure and reliable way of communication for Iranians and friends”, and offers instructions on how to use proxy servers and access the Internet anonymously along side advice from techies around the world on circumnavigating government blocks.

Websites providing software to surf incognito such as the Tor Project have seen surges in traffic this week and a slew of new sites have appeared offering assistance. The Global Internet Freedom Consortium, or GIF, also provides anti-censorship software and has resumed services to Iran since the election crisis. It predominantly serves China. “Due to the dynamic situation in Iran caused by the election and its protest aftermath, the number of daily ‘hits’ from Iran has tripled during the past week,” said GIF deputy director Shiyu Zhou. The site has experienced server overloads this week from a reported 400,000 unique users accessing it from Iran. GIF last year introduced a Farsi language version of the Freegate software and usage has since surged.

Software solutions such as these have become popular throughout Asia in recent years as more countries stifle the free flow of information over the Internet.

[Martin J Young is an Asia Times Online correspondent based in Thailand.]