Tasers: Not As Safe As Law-Enforcement Thinks 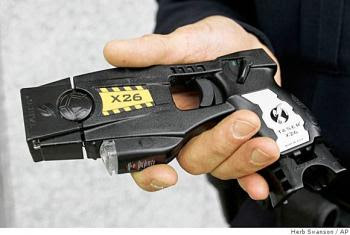 Stun guns like this Taser X26 shown in a 2005 photograph are intended as a nonlethal alternative to guns for law enforcement. Photo: Herb Swanson/AP.
UCSF study raises doubts about stun gun safety
By Elizabeth Fernandez / January 24, 2009

The number of in-custody sudden deaths rose dramatically during the first year California law enforcement agencies began using stun guns, raising questions about the safety of the devices, according to a new study at UCSF.

The electronic weapons are intended to be a nonlethal alternative to the gun.

“Tasers are not as safe as thought,” said Dr. Byron Lee, one of the cardiologists involved in studying the death rate related to Tasers, the most widely used stun gun. “And if they are used, they should be used with caution.”

The researchers analyzed sudden death data from 50 law enforcement agencies in the state that use Tasers. They compared the death rate pre- and post-Taser deployment – analyzing data for five years before each agency began using Tasers and five years afterward.

They found a sixfold increase in sudden deaths during the first year of Taser use – amounting to nearly 6 deaths per 100,000 arrests.

“I didn’t expect what we found,” said Lee. “I thought we would find no difference in the rate of sudden death. But there was a rather dramatic rise.”

After the first year, the rate of sudden deaths dropped down to nearly pre-Taser levels, suggesting that police and others in law enforcement altered the way they were using the devices to make them less lethal.

“Sudden deaths are extremely rare events, but it is important to look into why these events happen and whether law enforcement agencies are fully informed of the real-world risks,” Lee said.

California does not have a statewide training standard for stun guns, which have been used in the state for decades.

“The manufacturer provides introductory training, then law enforcement agencies do supplemental training,” said Robert Stresak, a spokesman for the California Commission on Peace Officer Standards and Training, which sets minimum training standards. “It’s on an agency by agency basis. The content of the course could vary widely as to what is taught.”

“Maybe a simple change of technique is what is necessary,” he said. “The longer you hold the trigger, the higher the danger to the heart. … The fewer pulses the better.”

San Francisco, which does not use the devices, was not part of the study. Tseng declined to give specifics about local jurisdictions involved in the research but said that “Oakland did not give us data. San Jose did give us data.”

Two years ago, Amnesty International reported 156 stun gun-related deaths of people in the United States during the previous five years.

The weapons have generated controversy, but a report last year which suggested a sweeping slate of reforms to the San Francisco Police Department said that allowing the use of Tasers may reduce injuries to officers and suspects.

Tasers are used by more than 12,000 law enforcement, military and correctional agencies in the U.S. and abroad, said UCSF’s Lee.

“We need good studies on the physiological impacts,” said Walker, an emeritus professor of criminal justice at the University of Nebraska in Omaha. “I’d want to know more about the deaths, interview the officers to find out if they self-corrected.”

The study’s findings were published online this week by the American Journal of Cardiology.

This entry was posted in RagBlog and tagged Law Enforcement, Tasers. Bookmark the permalink.