Teabaggers Notwithstanding : Reform Mostly a Flop 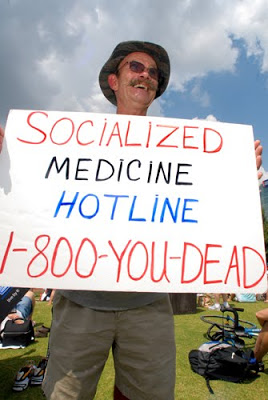 After a period of relaxation and reflection my attention returned to the recent health care legislation.

Two recent TV programs stirred me up. First, a poll on MSNBC’s The Ed Show found that 96% of those responding feared that the irrational hate mongering by the right wing zealots and their militia associates would in the near future bring violence upon the United States

Second, PBS’s Frontline showed how the Obama administration acceded to the wishes and dictates of the health insurance and pharmaceutical industries in crafting its ludicrous health care legislation

Ed’s poll results on MSNBC fit my own feelings about the obvious drift of our nation and the paradox of the teabaggers and their kin violently demonstrating against their own best interests, naively bending to the propaganda fueled with the financial support of Charles and David Koch, billionaire sons of Fred Koch, who in 1958 founded the John Birch Society.

This brings to mind words written at an earlier time, in another country:

“The art of leadership consists of consolidating the attention of the people against a single adversary and taking care that nothing will split up this attention… The leader of genius must have the ability to make different opponents appear as if they belonged to one category. Tell big lies. Do not hesitate or stop for reservations. The masses are always more easily corrupted in the deeper strata of their emotional natures than consciously, and thus fall victims to the big lie rather than the small lie, since they themselves often tell small lies but would be ashamed to resort to large-scale falsehoods.

Vehemence persuades the masses — the louder the statement the more plausible it seems — and passion convinces them. The masses always respond to compelling force… Since they have only a poor acquaintance with abstract ideas their reactions lie more in the domain of the feelings, where the roots of their positive as well as their negative attitudes are implanted.” — Mein Kampf, 1923

I will not once again attempt to psychoanalyze the frightening antics of the Tea Party movement and their claque since this has been done so well in recent articles on The Rag Blog by Sherman DeBrosse (here and here) and by Harry Targ. I am always intrigued by the vitriolic rebuttals appearing in the comments following such articles written by the Faux News crowd, who are too cowardly to sign their names.

Why are the critics so paranoid about legislation that gave the health insurance industry exactly what they wanted: compulsory enrollment of all Americans in private, profit making, insurance plans, and no public option to provide competition to the private insurers.

Further, it guaranteed the continued profitability of the pharmaceutical industry through behind the scenes negotiations with the White House. In all 2000-plus pages of the legislation there is little that specifically deals with health care per se, as the hearings on the bill very carefully excluded the folks actually involved in the health care scenario — the patients and their physicians.

There could have been true health care reform if Congress had instead passed the30-page HR 676, the legislation proposed by the 17,000 member Physicians for a National Health Program and their hundreds of supporting professional and patient oriented organizations.

There is little to indicate that the health care legislation will make the United States once again a world leader in care of our sick and disabled. The British Medical Journal on March 30 published an article By David U. Himmelstein and Steffie Woolhandler entitled “Obama’s reform: no cure for what ails us,” that was also published on the PNHP web site.

And even The Council on Foreign Relations published a critical piece by Senior Fellow for Global Health, Laurie A. Garrett, called “Health Care Reform: Global Impressions.”

It appears that the general public hasn’t the vaguest idea of what is included in the bill. The U.S. Census mailings were preceded, in what my opinion, was an unnecessary mailing telling me that I would be getting a census form. If the powers-that-be in Washington can fund such seemingly useless but clearly expensive mailing, why cant Health and Human Services underwrite a nationwide explaining in simple language the legislation and its benefits.

Perhaps such information would undercut the prevailing foolishness spewing from the propaganda machines of the U.S. Chamber of Commerce, The Heritage Foundation, Faux News, and the like, that the legislation is “socialist,” and places bureaucrats between patients and their doctors. It appears that only the opponents of the Obama Administration are capable of providing the general public with information about such matters, even if it is inaccurate.

It is past time that the Democrats awaken and try and repair some of the damage done to their progressive base before the November elections.

The health care legislation does little or nothing to control costs of health care. (As a matter of fact, if Massachusetts is an example, health care costs will rise.)

The current legislation does, in fact, do some positive things. It provides dependent coverage in individual and group health plans for young adults under aged 26. There is a prohibition on individual and group plans from imposing lifetime limits on the dollar value of benefits. It is required that health care plans offering individual health insurance policies must cover certain preventive services and immunizations.

It creates a temporary high-risk pool to cover people with preexisting conditions, with individuals and small groups buying coverage through state-based health insurance exchanges beginning in 2014. There is a minimal benefit in payment to primary care physicians; however, there is little included to induce medical school graduates to undertake primary care and thus slow down the increasing shortage of primary care physicians..

The law further prohibits private “Medicare Advantage” plans from charging enrollees more than original Medicare for certain services, including chemotherapy administration and skilled nursing care, but not until 2011. At the same time certain deductibles and coinsurance services will be eliminated as was recommended by the U.S. Preventive Task Force. No other benefits will come into effect until 2013 0r 2014. There will be gradual closure of the doughnut hole under Medicare Part D through 2020.

Meanwhile, it is worthy of note that, in Pennsylvania, Pittsburgh’s Highmark, Inc. (Blue Cross/Blue Shield) reported total revenues at $13.7 billion, up about $700 million over 2008. The region’s dominant health insurer also makes a point — as it does each year — to show that its net income margin of 1.4% is well below that of the nations largest insurers, such as Aetna, Cigna, and Well-Point.

The company’s surplus is now up to $3.4 billion, while total health insurance membership dropped slightly — from 4.8 million members to 4.7 million. Thus, it should be noted that many premiums increased 50% this year.

One of the more bizarre contentions about health care reform – and one that has stirred up paranoia – is the rumor that patients will be implanted with microchips. This has been thoroughly debunked.

I fear for my country. My ancestors have been here since the early 1700s. They settled in Western Pennsylvania and were active at the Battle of Bushy Run in the French and Indian War. They were prominent historically throughout the ensuing years, including the founding of Pershing Park outside of Latrobe, Pa, in honor of a cousin of my grandmother’s cousin Gen. John Pershing.

I came on board in 1921 and have witnessed nearly a century. Never have I been so apprehensive about my daughter’s and her husband’s future, and those of my grandson and his wife, as we view the increasing elimination of the middle class and the steady move toward a regime dominated by the far right.

We are hearing the voices of hate and intolerance, as we become ever more subservient to the international corporations. We are rapidly becoming a society in which the very rich dominate the very poor — who, in their misery, do not give a damn.

In short we approach the status of a Third World nation, with the haves totally dominating the have nots.

3 Responses to Teabaggers Notwithstanding : Reform Mostly a Flop