Ted McLaughlin : Are We Marching to War With Iran? 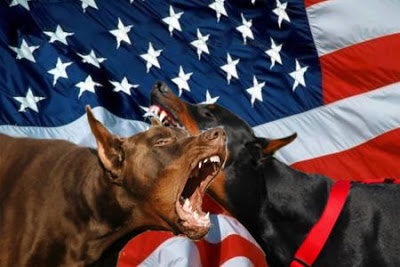 Dogs of war. Graphic from Press TV.
Dogs are barking:
Are we marching to war with Iran?

The animosity between the United States and Iran has a longer history than most Americans realize. Before 1950, most of the oil assets of that country were owned by Western powers (mainly the United Kingdom and the United States).

The countries paid the Shah (King) of Iran for the right to take Iran’s oil, but most of those funds went into the Shah’s many bank accounts and very little was ever actually used for the benefit of the people of Iran. That changed for a short while in 1951.

It was in that year that the Iranian Majlis (parliament) put a socialist prime minister in power, Mohammad Mossadegh. Mossadegh nationalized the country’s oil and proposed using oil revenues to help the people of Iran. This created a power struggle between the Shah and Mossadegh, and the Shah fled the country. This angered the United States (and United Kingdom). How dare these people try to own and control their own resources, and interfere with the profits of Western oil companies!

In 1953, the American CIA overthrew Prime Minister Mossadegh, and reinstalled the Shah as the absolute ruler of Iran. The Shah (Mohammed Reza Pahlavi) then ruled as an even more brutal dictator, using his SAVAK (secret police) to take care of any political opponents. He was able to retain his power for over 20 years, but was hated by the people and viewed as a puppet of the United States.

In the late seventies, the people rose up against the Shah. They were led by Muslim clerics, especially Ayatollah Ruhollah Khomeini, and in early 1979 they seized power and the Shah fled the country. An elected government was set up, but most real power lay with the religious leaders (and still does).

This new government was understandably anti-American, since it was the United States that had overthrown their elected government and put the Shah back on the throne (and then supported him until his overthrow).

This anger at America resulted in the destruction of the American embassy and the taking of embassy employees as hostages. This was a ridiculous and unnecessary action, and is still used by the U.S. to convince others the government in Iran cannot be trusted. The employees were eventually released in January of 1981, but the stage had been set for the current bad relations between the two countries.

And since 1981 the tension between Iran and the United States has only grown worse — and neither seems ready to institute talks to restore diplomatic relations and lessen that tension. The latest charge from the United States is that Iran is building a nuclear weapon. There is no evidence of this, but it has not stopped politicians from making the accusations and the American media from reporting the same.

While it is true that Iran is developing nuclear power plants to supply energy to its people, and is purifying its own uranium (since sanctions have cut off their ability to buy it from other countries), there is no evidence at all that they have started to develop a military application for this nuclear power or have attempted to build a bomb.

Even the International Atomic Energy Agency admits this is true. All they have said is that the Iranians might soon have the capability to do that — not that they are doing it or will do it in the future. The idea that Iran is building a nuclear weapon resides only in the fevered imaginations of fear-mongering politicians.

But the United States and other countries have used this fear to attack Iran with sanctions, the most recent of which were just imposed. The latest sanctions say any country or company that does business with Iran cannot have access to the financial services of the United States.

The Iranians see this as an attempt to choke off the sale of their oil, upon which they depend. And they are right — that is exactly what the U.S. is trying to do. They want to force regime change in Iran by bankrupting the country.

And the Iranians have overreacted to this move. They have now threatened to block the Strait of Hormuz, through which about 16% of the world’s oil supply flows. And they recently held naval maneuvers in that area to emphasize that point.

These actions have brought both countries to the brink of war — and neither seems willing to back down, or even discuss reducing tensions. It seems like the leaders of both countries want war, because both are escalating the rhetoric and trying to justify their own positions.

The crazy thing about this is that neither country can afford a war. It would take the United States only a couple of weeks to use their air power to destroy Iran’s infrastructure. But although the U.S. could seriously damage Iran, it could not win by air attacks alone. And the U.S. simply doesn’t have the ground strength for another prolonged ground war (and a ground war in Iran would be even worse than what we experienced in Iraq, and are still experiencing in Afghanistan).

There are some who believe the war with Iran has already started, and there is some evidence for that view. The Iranians recently shot down a U.S. drone that had invaded Iranian airspace, and several U.S. rockets have landed in an Iranian border area, killing several people.

The United States says the rocket attacks were accidental, but how are we to know? Have the first shots in the coming war with Iran already been fired?

I wish it wasn’t true, but I think there will be a war with Iran. And we may already be a lot closer to that war than anyone realizes.

3 Responses to Ted McLaughlin : Are We Marching to War With Iran?