Ted McLaughlin : Can the Republicans Kiss and Make Up? 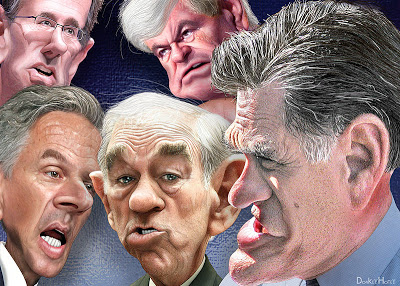 And the losers are (clockwise, from upper left): Rick Santorum, Newt Gingrich, Mitt Romney, Ron Paul, and Jon Huntsman (who dropped out of the race on Jan. 16). Caricature by DonkeyHotey / Wikimedia Commons.
A tough primary season:
Republican Party suicide?

Politics has always been a rather brutal undertaking, and never more than in a general election or a party primary. The stakes are high and the loser goes home while the winner assumes a lot of power — or in the case of a primary, the right to run for that power position.

Even the tamest of primary campaigns can rightfully be compared to a bare-knuckles brawl, where even the winner comes out bloodied (and must heal his campaign before taking on his opponent in the general election).

But this year the Republicans have turned that bare-knuckles fight into a gutter fight with knives and other weapons, and some are now wondering whether the eventual winner (and possibly even the party itself) might be mortally wounded when it is all over. Americans are used to negative campaigning, but the Republicans seem to have kicked that negativity up a few notches this year.

Just listen to the words of Ken Goldstein, president of Campaign Media Analysis Group (CMAG), who says, “I spent much of my academic career telling reporters, ‘Relax, this is not the most negative campaign ever.’ Well, this IS the most negative campaign ever.” And he has the facts to back up that statement. Consider the following facts gathered from just the Florida campaign:

To me, that sounds like the very definition of a negative campaign. And it’s already having an effect beyond the borders of Florida. While the negative ads were run within the state, they were reported by the media all across the country. And it all seems to be having a negative effect on the Republican Party — even among the GOP faithful.

A new survey by the prestigious Pew Research Center shows that now a majority of Republicans believe their field of presidential hopefuls is only fair/poor. This is the first time in that survey that more than 50% have believed that.

Republicans seem to be losing faith in their presidential candidates, and that is not good for their hopes of winning in November. At this point in 2008, about 68% of Republicans rated their field of candidates as good/excellent.

The fact is that there is now a significant split in the Republican Party — a split between the teabagger/evangelical/ultra-right-wingers and the establishment/moderate-conservatives. And the two groups don’t like each other at all.

The race between Romney and Gingrich is more than just a contest between those two men. It is a proxy fight for control of the party going into the future — and it is a dirty no-holds-barred proxy fight.

Can these two disparate elements in the Republican Party kiss and make up after the primaries are over? They will try, but whether that effort will be successful is getting more doubtful every day — especially with Romney’s big victory in Florida. It wouldn’t take too many Republicans to go over to a third party or just stay at home on election day, to have a disastrous effect for the Republicans’ down-ballot on election day.

And worse yet for Republicans is that there is no reason to believe these party divisions won’t be just as bad two or four years from now. What we are now witnessing may be more than just a very negative campaign. We could be watching the slow suicide of a once-respected (remember Abe Lincoln and Teddy Roosevelt) political party.

2 Responses to Ted McLaughlin : Can the Republicans Kiss and Make Up?