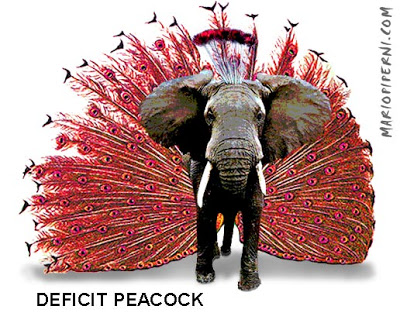 Matt Yglesias refers to politicians who use deficits for short-term political gains (like Republicans whose tax cuts for the rich added $4 trillion to the deficit), as “deficit peacocks.” Illustration by Mario Piperni from mariopiperni.com.
CBO projections:
Republican economic policies
will expand debt, increase deficit

The Congressional Budget Office (CBO) is the nonpartisan organization that both parties use to see the effect of their bills and economic policies on the American economy. While politicians might throw out unsubstantiated numbers glorifying their own bills, the CBO is tasked to look beneath and behind the rhetoric to determine the actual effects of those bills.

Lately, the Republicans have been ignoring many of the CBO projections, and after hearing the latest, it is easy to see why. The Republican “trickle down” giveaways to the rich are responsible for much of our ballooning national debt and the continuing national deficit — a deficit and debt that might be understandable if they creating jobs, but they are not.

For 2011, CBO Director Doug Elmendorf says that the deficit will be about $1.5 trillion (nearly one-third of which will be due to the massive Republican tax breaks for the richest 2% of Americans — projected to be over $400 billion a year). So while complaining about the deficit, the Republicans actually increased it by nearly 50%. They promised in the last campaign to cut $100 billion, but now are only talking about cutting a little over $50 billion for 2011 (a drop in the bucket compared to the huge increase they created).

However, these figures will be true only if current law is allowed to continue. If, for example, the cuts in Medicare Advantage mandated in the health care law were not to take place (like the Republicans want), and the tax cuts currently in place were not allowed to expire at the end of 2012 as scheduled (and the Republicans are sure to want to extend them), then the baseline projection for 2015 through 2021 would at least double, and the total debt held by the public would reach 97% of GDP (the most since 1945).

From these numbers it’s easy to see that a the Republican policy of repealing health care and continuing the cutting of taxes for the rich would be a disaster for the national deficit, and even worse for the national debt. Republicans like to claim they are the party of fiscal responsibility, but a review of their recent actions and a look back at Republican administrations shows something different. The truth is that the Republican “trickle down” policies have consistently added to both the deficit and the debt — not decreased them.

The CBO does warn that if current law were continued, although deficits would come down in the next few years, the national debt would continue to grow. Either further cuts in government spending would be needed (including no more Republican giveaways to the rich) or an increase in taxes, or both. There is no way to bring down the national debt without doing this. The obvious solution would be to cut the military some (the most bloated area of the American budget) and raise taxes on the richest Americans (beyond letting the current cuts expire). But Republican policy would not allow either of these things to happen.

The CBO also paints a rather dark picture for employment. They say that if the economy produces 2.5 million jobs each year between now and 2016, the unemployment rate will finally fall below 6% in 2016. Even this dismal projection seems to me to be overly optimistic. Remember, only 1.1 million jobs were created in 2010 — a figure that barely kept up with the number of new people entering the work force.

Unless the increasing amount of job outsourcing is stopped (something the Republicans oppose and recently blocked in Congress), it is unlikely that the 2.5 million jobs a year figure can be reached. While they may be created (since the corporations and the rich are doing very well), the sad fact is that far too many of them will be shipped abroad (where good-paying jobs can be turned into poverty-wage jobs).

After viewing this latest CBO projection, it becomes even clearer that the Republican policies of giveaways to the rich and outsourcing of jobs are the biggest impediments to bringing this country out of the recession. Ordinary Americans are still hurting and still feeling the full effects of the recession, but the Republicans are only interested in helping the rich — the only people doing well right now.

This entry was posted in RagBlog and tagged Economics, Republican, Ted McLaughlin. Bookmark the permalink.