Ted McLaughlin : Congressional Insider Trading is a Crime! Or Should Be… 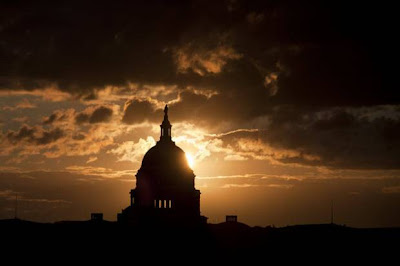 Image from Dallas News.
There oughta be a law:
Stop Congressional ‘insider trading’

Last week it was revealed that members of Congress regularly do something that, if done by other Americans, would be considered a criminal act. It is “insider trading.” This is when someone uses information not available to the general public to make trades in the stock market, thereby gaining an unfair advantage in the market.

An example of this would be when a corporate insider knows something will soon happen that will affect the market price of that company’s stock. It would be illegal for him/her to use that knowledge to buy or sell that company’s stock until that information is released publicly.

While it would be illegal for an American citizen to use this secret information to enrich themselves by buying or selling stock, that illegality does not extend to members of Congress or their aides. And many members of Congress and their employees (of both political parties) have used “insider trading” to fill their own personal bank accounts with cold hard cash (and lots of it).

Of course this isn’t the only example of Congress giving themselves perks that ordinary Americans don’t enjoy. How many ordinary workers do you know that can vote themselves a raise without permission of their bosses, even in the midst of a recession? Congress can, and they don’t seem to care what their bosses (the people of this country) think about it. But in spite of their usual arrogance, this insider trading story seems to have embarrassed at least some members of Congress.

Rep. Tim Walz (D-Minnesota) and Rep. Louise Slaughter (D-New York) have introduced a new bill in the House of Representatives. It is called the “Stop Trading on Congressional Knowledge Act (STOCK Act), and it would ban members of Congress or their aides from buying or selling stocks or commodities if they have “material nonpublic information” that relates to a company or commodity. The bill would eliminate the insider trading advantage that Congress currently enjoys over all other Americans.

But while the bill makes a lot of sense and would be supported by a large majority of Americans, don’t start celebrating its passage yet. For a lot of the members of Congress this is akin to killing the goose that lays the golden eggs, and you can bet that many of them will fight tooth-and-nail to kill this bill. In fact, they are already coming up with reasons why the bill “wouldn’t work,” and might even be a bad idea.

These naysayers tell us that it would be very hard to prove that a member of Congress or their aides had used insider information in making trades. And they say that Congress might just make many more things secret from the public to cover their tracks after making insider trades.

These are actually fairly good arguments. We already know that many Wall Street executives engage in insider trading but are rarely caught, and authorities would be even more reluctant to make an accusation against a member of Congress. And the government already keeps too many things secret that should be public knowledge.

But even if both of those things are true, they are nothing more than excuses for failing to address the problem. Insider trading is wrong and should be outlawed no matter how hard it is to prove. And it is just as wrong for Congress as it is for everyone else.

While not all insider trades are caught, some are and that acts as a deterrent to others who would consider it. As for Congress trying to cover their illegal acts with government secrecy, there are ways to expose that (remember WikiLeaks?).

The truth is that there is an easy way to overcome both of those arguments. Just amend the STOCK Act to outlaw all trading of stocks and commodities by members of Congress and their aides and immediate family members (whether insider trading is used or not).

I know there will be some that will say this would be unfair, and that members of Congress should have the right to make money by honest trading just like other Americans. I disagree.

These men and women were not sent to Congress to make themselves rich. They were sent there because they told the voters they wanted to serve their country, and they are well-paid for that service. A member of Congress is paid nearly $170,000 a year (plus expenses, perks, and benefits). The salary alone is three times the average wage of the bottom 99% of Americans.

If this is not sufficient remuneration for their service to their country, then I question if their running for office was really a desire to serve — and they should resign (and then they could trade to their hearts desire).

Government service should not be the path to riches, and for millions of government workers at all levels it isn’t. They work for salaries lower than they could get in private industry because they have a desire to serve their country and their fellow citizens — and they retire on a modest income after that life of service. Why should it be different for members of Congress (or their aides)?