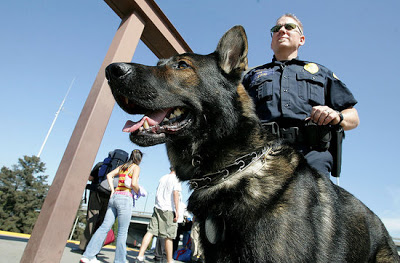 Here in the Texas Panhandle the Department of Public Safety (Texas’ state police) and sheriff’s departments arrest a lot of people on Interstate 40 for drug possession. It is not unusual for there to be at least one or two of these arrests, usually of people just traveling through the state, every week or two. It’s like the police look for out-of-state license plates and then stop and search those cars.

But how can they legally search the cars? They use drug dogs. If a drug dog “hits” on any part of a car or truck, that is considered to be “probable cause” to search that vehicle (and a search cannot be done without either probable cause or the consent of the owner).

If drugs are then found, the car’s passengers are arrested and charged with smuggling drugs. The case makes the newspaper and everyone is amazed at how good the drug dogs are and what a wonderful law enforcement tool they are. But is that really true?

For one thing, no one knows (except the police) how many times the drug dogs “hit” on a vehicle and nothing is found. That’s because there is no arrest in those cases and therefore no newsworthy story, especially if the driver is from out-of-state and continues his/her journey.

The general public (and the courts) only hear about the incidents where drugs are found, and that gives them a skewed opinion of just how good the drug dogs really are.

Researchers at the University of California, Davis decided to determine just how good the drug dogs are. They performed an experiment using 18 different teams (drug dog and police officer) and it turned out that the dogs had over 200 false “hits” on places where there were no drugs (and never had been any drugs). Here is how the experiment worked:

The researchers took 18 drug dog teams to a church, where it is likely no drugs or explosives had ever been placed in the past. The cops were told there might be up to three target scents in any one of four rooms. If they saw a piece of red construction paper in the room, that indicated where a target scent was placed.

The first room was left untouched. The second room had a piece of red construction paper on a cabinet. The third room had two sausages and two tennis balls placed as decoys. The fourth room had the decoy scents and the red paper. However, none of the rooms had any drugs or explosives.

There shouldn’t have been any alerts, but, in fact, handlers indicated their dog had alerted in every room. There were more alerts in rooms with red paper (which piques the cop’s interest) and no corresponding increase in rooms with sausages and tennis balls (which would pique a dog’s interest).

In other words, at best, dogs are responding to the subtle non-verbal cues of their masters to find drugs or explosives where the human thinks there should be drugs or explosives. The cop suspects you have pot so his body language makes the dog alert. At worst, the cop is purposefully cuing his dog to alert when he wants a handy excuse to violate your Fourth Amendment rights.

I am glad that someone finally performed a test like this. I worked in some branch of law enforcement for most of my working life, and I have believed for a long time now that these dogs are not nearly as good as is advertised by those who use them. They just make too many mistakes.

Years ago, I worked in a juvenile prison. Every few weeks we brought in a drug dog to search for hidden drugs in the institution, and many times it was my duty to accompany the officer and dog on their rounds.

The dog always “hit” on several locations on each trip, but never found any drugs. The officers excuse was always that there had been drugs in the location at one time. After many of these failed excursions, I lost any faith I had in drug dogs.

Probable cause is not established just because an officer suspects something. There must be something more, and in suspected drug stops on the highway, that something else is a “hit” by a drug dog. The courts have been led to believe these dogs are so accurate that they rarely make mistakes, and that is why they take a “hit” by one of these dogs to be worthy of establishing probable cause — thus justifying a legal search. Unfortunately, that is just not true.

Can they sometimes find drugs? Yes. But far too often they are wrong. And they are wrong enough times that they should not be used to establish probable cause. Frankly, if an officer wants to search a car he can always find a dog that will “hit” on that car. That’s not real probable cause, just an excuse that can be used in court to justify the illegal search.

It is time for more research to be done, and then for the courts to stop recognizing a “hit” by a drug dog as probable cause. They simply aren’t reliable enough.