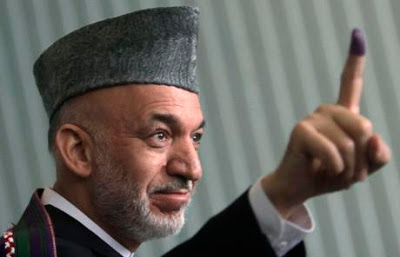 President Hamid Karzai votes: Supposedly indelible ink used to mark voters’ fingers in the Afghanistan election to prevent fraud may have been easily washed off. Photo by Reuters.
Ink hardly dry on electoral farce:
American opinion and the Afghan fiasco

The citizens of Afghanistan went to the polls this last weekend to elect 249 new members of their parliament, but initial reports said the voting was much lighter than it was in the presidential election a few months ago. Some will say it’s because the Taliban has tried to discourage people from voting (and they have). But they did the same thing in the presidential election.

It is far more likely that after the corrupt and fraudulent presidential election, few Afghans expect this election to be any different. Why risk your life to vote when the election is probably going to be decided more by fraud than the will of the people? And it looks like the worries about fraud are being borne out.

At the polls they used ink on a finger to keep people from voting more than once. But the ink given out turned out to be easily washed off with just a little water, and household detergent or bleach. There have been reports of people voting repeatedly by washing off the ink. There are also reports of thousands of forged voter cards being used and of bribes being taken by those working at the polls.

The results from the election will probably not be known until near the end of October. Many of the outlying and remote polling places will be transporting the ballot boxes back to more populated areas by donkey to be counted. And all the counting will be done by hand.

But even after the results are announced it is unlikely that most people and/or candidates will trust the results. There is already talk of the results being challenged. And while this fraudulent mess goes on, American soldiers fight and die to continue propping up this corrupt government.

It’s no wonder that many Americans are losing faith in what we’re trying to accomplish in Afghanistan — or don’t think we are capable of accomplishing anything in that country. A new survey done by The New York Times and CBS News shows this clearly.

The poll asked Americans whether we are doing the right thing by fighting in Afghanistan or whether we should not be involved in that war. Here’s what they said:

Then people were asked whether the war there is going well or going badly. They said:

The American people may have supported this war years ago, but it has gone on for too long and too little has been accomplished with too many lives lost. They no longer believe we are doing the right thing by continuing the war, or even that anything could eventually be accomplished by dragging out the war. It is not likely that the corrupt government and fraudulent elections will change that opinion.

And the opinion is even worse about the Iraq war, where 50,000 American soldiers remain involved regardless of what the government has said. The poll showed that 71% of Americans do not believe the Iraq war was worth the cost in American lives and money.

It is sheer insanity and misguided pride that keeps these wars going (just like the Vietnam war was continued long after it was known that it could not be won). This country is very good at fighting conventional wars (which is what our soldiers were trained for and our military equipment designed for). But the wars in Vietnam, Iraq, and Afghanistan were not and are not conventional wars. They are efforts at nation-building through military power — and that is something we’ve never been very good at doing (and are unlikely to be any better at it in the future).

Americans have always been better at changing the world through providing a shining example of democracy, rule of law, and tolerance. Sadly the current wars and the tactics we have used in them, including torture, have caused us to lose the respect of much of the world. We have muddied the shining example we once provided.

It is time to end these ridiculous wars and bring all our soldiers home. It is also time to try and rebuild a respect for democracy, rule of law, and tolerance once again in this country in the hope that we can once again be respected as a world leader instead of just being seen as an international bully.