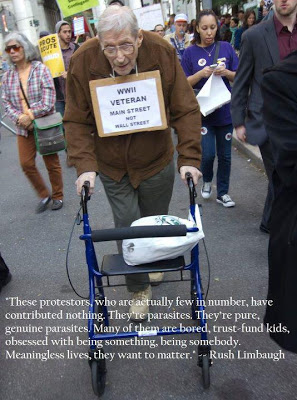 ‘The natural progress of things is for liberty to yield and for government to gain ground.’ — Thomas Jefferson

The quote at the bottom of the picture above shows what the right wing would like for Americans to believe — that the Occupy Wall Street movement is nothing more than a few bored young people, parasites with meaningless lives who have contributed nothing to America. But this picture shows that argument is a pathetic lie (designed to protect the 1% and the failed Republican economic policy).

This gentleman has contributed much to his country. As a World War II veteran, he put his life on the line for his fellow citizens — to defend freedom for not only his generation, but also for all the generations that followed.

And I suspect that he has worked hard all his life to support his family and contribute to our economy. He certainly doesn’t look like a “trust fund baby.” And he’s not the only older American who has joined in the protests. There are many — they may not be camping out with the younger folks, but they are there for the marches and demonstrations.

For many of these older demonstrators — even if they and their younger cohorts are able to finally affect the change that is needed in this country — that change will probably not benefit them much. That is not why they are there. They are there because they love their country and they want to protect the constitutional rights for those who come after them. And they want some economic justice for their children and grandchildren and great-grandchildren.

These people know something that far too many Americans seem to have forgotten — that rights, even constitutional rights, must be fought for continuously, or they will disappear. It is simply the nature of ALL governments to assume as much power as they can — and this is true even of rather benign democratic forms of government. Every form of government will slowly eat away at the rights of its citizens if allowed to do so. As Thomas Jefferson so wisely told us, “The natural progress of things is for liberty to yield and for government to gain ground.”

These governments always have a seemingly justifiable reason for eroding the rights of citizens — the most popular being that it is necessary to defend the country, or to maintain law and order, or to please some god.

A perfect example of this was the Bush administration’s imposition of the Patriot Act. They said it was needed to prevent another 9/11 disaster. But 9/11 did not happen because of a lack of intelligence gathered — the plans were known before the incident happened.

9/11 happened because of incompetent leadership that did not take the proper precautions after learning of the plan to attack America. And preventing another 9/11 was just an excuse government used to seize a few more of the people’s rights.

And now we have the Occupy Wall Street demonstrations. These protests were started to point out the economic injustices of our present society. The deck has been stacked in favor of the richest Americans (because they own far too many members of Congress) and this has resulted in a serious recession and the loss of millions of jobs — not to mention a vast gulf in wealth and income between the richest Americans and the rest of America. And much of America has responded favorably to these demonstrations, because they recognize that change must come.

In fact, the demonstrations have been so popular and widespread (blanketing the nation) that the 1% and their government lackeys are beginning to get scared. They want to stop the movement before it grows large enough to actually affect the needed change.

This is normal, as no group in power has willingly given up any of their power or economic advantage. The sad part is that, like past governments here and around the world, they are willing to deny the rights of the people in an attempt to hold on to their power and advantages.

It is written in the United States Constitution that the people of this country have certain rights, and among these are the right to free speech, the right to peaceably assemble, and the right to redress the government for their grievances. The Occupy Wall Street movement is simply trying to exercise those rights in its quest for economic justice. And the authorities are trying to deny them those rights — often through the use of violence.

The stakes were already high, as they will be in any quest for economic justice. But now those stakes have been heightened even more. It has now become a fight to either keep or cede to the government the basic rights given citizens by the Constitution. Whatever anyone might think of Occupy Wall Street’s goals, it is now imperative for all Americans to step up and demand that our constitutional rights be respected and obeyed by the government.

These rights have always been guaranteed to the rich and powerful but are often denied to those without political power. Now it is time for the Americans of this generation to fight for those rights to be extended to every citizen, and that fight can only be won if everyone becomes involved — regardless of age, sex, race, color, or national origin. It is everybody’s fight, and it is too important a fight to lose.

It is not good enough for those rights to be written in the Constitution. Government must be forced to honor those rights, or they mean nothing.