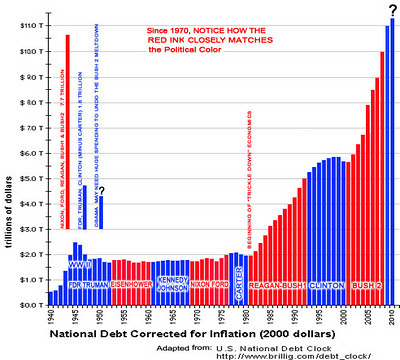 The Treasury Department admitted this week that the national debt of this country has, for the first time, topped $15 trillion. That’s an incredibly large figure, and just about equals the entire Gross Domestic Product (GDP) of the country for one year. And the Republicans are trying to blame one person for the entire debt — President Obama. They act like they had nothing to do with creating any of that debt.

Obviously the old canard about elephants never forgetting is not true — at least for political elephants. The GOP elephants have had to forget the economic history of the last 30 years to arrive at their ludicrous conclusion.

Let’s take a look at the history of the national debt. First of all, the fact that some national debt exists is not necessarily a bad thing. In fact, there has never been a time in this country’s history when there was not some level of national debt — from the presidency of George Washington to the present — and yet the nation and it’s citizens have prospered.

As the chart above shows, the national debt reached about $2.5 trillion during World War II, which was understandable since large sums of money had to be spent to arm ourselves and our allies and fight the war. And the national debt stayed around or just below $2 trillion through the next seven presidencies (Truman, Eisenhower, Kennedy, Johnson, Nixon, Ford, and Carter). And generally, the economy was very good during this stretch — both for workers and entrepreneurs.

Then Ronald Reagan was elected president and things changed. He tossed out the Keynesian economics followed by previous presidents and instituted a supply-side “trickle-down” theory of economics. This trickle-down economics favored the rich, and the gap in wealth and income between the rich and the rest of America began to widen — and the national debt began to grow much larger.

After assuming office, it took Bill Clinton a few years to bring the deficit under control. But by the time he left office, the nation was actually enjoying a surplus each year (of a little more than $200 million) and the national debt was starting to be paid down. He left the next president with a national debt of about $5.6 trillion and a small yearly surplus.

By the time Bush left office at the end of 2008, the gap in wealth and income between the rich and the rest of America was the biggest it had been since the 1920’s — and the national debt stood at about $10 trillion. And the nation was thrown into a serious recession that cost many millions of jobs. The economy was a mess and Bush had laid the groundwork for the deficit and national debt to continue climbing.

But even though President Obama inherited an economy that was a horrible mess, he cannot be completely absolved from any part in further increasing both the deficit and the national debt. That’s because he continued many of Bush’s worst mistakes. He didn’t end the wars, he increased the military budgets more, and he extended the Bush tax cuts for the rich. If he had stopped all of those things, the national debt would not stand at over $15 trillion today — but he didn’t.

So now the Republicans want to blame President Obama for the deficit. But that is hogwash. The dirtiest hands are those of Republicans. Obama’s sins are not of commission, but omission (for not stopping the trickle-down madness initiated by the Republicans). But regardless of who is to blame, the fact is that we have a national debt of $15 trillion.

What can we do about it? Republicans tell us that it can be controlled by doing nothing but making cuts to education and social programs and Medicare. That’s ridiculous. Even completely eliminating all of those would not pay off the national debt.

They also want to cut Social Security benefits (or abolish or privatize it). That’s also ridiculous. Social Security did not cause even one penny of the deficit or the national debt. They just want to get rid of it because they’ve never liked it.

So, what can be done to control the deficit and pay down the national debt to a reasonable level? There are some sensible solutions. Here’s what I would suggest:

That’s where I would start. Maybe you have some other suggestions. But one thing I don’t believe should be done in the middle of this recession is to cut social programs or education. The social programs are the only thing keeping millions of Americans’ heads above water, and education is the only way for millions more to better themselves.

The Republicans like to say we are passing our debt on to our children and grandchildren. That will only be true if we fail to act right now.