Ted McLaughlin : Recovery is a Myth For Most Americans 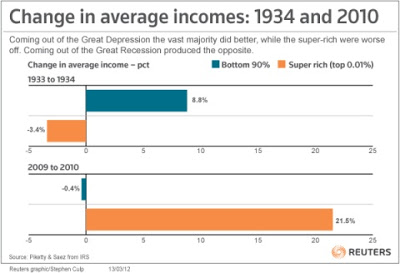 Chart from Reuters / ThinkProgress.
For most Americans:
The recovery is a myth

It all boils down to how the government has acted in response to it. In 1932, the country elected a huge majority of Democrats to Congress and put Democrat Franklin Roosevelt in the White House. The Democrats then went to work creating jobs. They created many jobs through government programs like the Works Project Administration (WPA) and the Civilian Conservation Corp (CCC), and taxed the rich to pay for it. These organizations went to work building America up, and we still enjoy many of the projects they completed.

But this also did something else besides putting some people in government jobs. It also increased the money flowing through the economy (because the people with those jobs now had money to spend). And all that new spending boosted the small businesses around the country, and as their business improved they also began to hire workers. The actions by those Democrats resulted in a rising economic tide that helped most Americans.

But Americans are not good at learning from history, so when the Great Recession struck in 2008 the country’s leaders did exactly the opposite of what the government had done to cure the Great Depression. They did this because the Democrats did not have a big enough majority to override Republican obstructionism. In 2009 and 2010, the Republicans in the Senate misused the filibuster rule to block any efforts the Democrats made to create large numbers of jobs.

The Republicans then shrunk the economy by laying off massive amounts of government workers (on both the state and federal level), cutting social programs severely, encouraging the export of American jobs, and extending the Bush tax cuts for the rich. And to their great shame, too many Democrats went along with this. This shrinking of the amount of money flowing through the economy also had the effect of hurting small businesses, so they also laid off workers.

After the 2010 elections, the Republicans had control of the House of Representatives so the obstructionism shifted from the Senate to the House. But the Republican policies (to block help for ordinary Americans while giving more to the rich) are still having the same effect they did in 2009 and 2010 — to keep the recession going for most Americans while only the richest Americans enjoy a “recovery.”

There is a solution — vote as many Republicans out of office as possible, and replace them with progressives. The Republicans know they have no solutions for the economic recovery of most Americans — they just don’t care as long as they can keep the money flowing to their rich Wall Street and corporate buddies.

That’s why they are trying to change the political focus from the economy to social issues (like abortion, contraception, immigration, race, same-sex marriage, etc.). If the Republicans are successful in changing the political agenda, then we can expect the economic pain to last many years longer for most Americans.