Ted McLaughlin : The ‘Free Market’ Myth and the Suicide of Capitalism 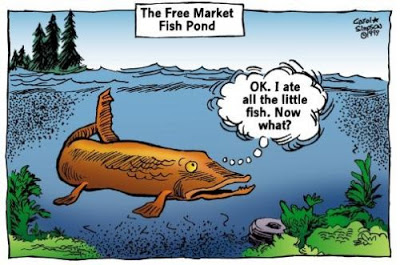 The ‘free market’ myth and the

suicide of the capitalist system

In a capitalist society such as ours the wealth will be redistributed to the richest people unless there are some regulations to prevent that.

We hear a lot today about free trade and free enterprise. Those are today’s code words for unregulated capitalism — the idea that capitalism can work for the benefit of everyone in a society as long as it is not hindered by government regulations. The proponents of this idea say that the more money the capitalists make, the more jobs they will create and the better off everyone in the society will be.

You may recognize this as the Republican “trickle-down” theory.

These modern Republicans may be surprised to learn that their boogeyman, Karl Marx was in favor of “free trade.” Look at this quote from Marx:

The rich and the corporations (today’s capitalists) have let their greed for accumulating ever larger pools of money blind them to reality (if they ever understood it in the first place). And that reality is that capitalists do not create jobs. Demand for products and services is what creates jobs. Capitalists simply exploit that demand to make money (and they have to put people to work in order to exploit that demand). But when the demand disappears, so do the jobs.

Now you may be asking yourself at this point: If an unregulated capitalism is suicidal then how has our system survived this long? The answer is regulation. When our system has started to get too out of whack, we have instituted measures to regulate or control the excesses of capitalism — measures designed to redistribute some of the income and wealth away from the rich and to the others in our society.

I know that the term “redistribution of wealth” has been demonized in this country, but that is ridiculous because wealth is always being redistributed in all societies. In a capitalist society such as ours, the wealth will be redistributed to the richest people unless there are some regulations to prevent that. These regulations will spread the distribution of wealth and income throughout the society. This is healthy, because a more equal distribution of income creates demand as people use that wealth and income to buy goods and services (and this allows capitalists to make money and workers to find jobs).

We have used various means to redistribute the income more fairly in this country. We created a progressive income tax (where the more money a person makes the higher tax rate they pay), we created and protected unions (which provided workers with decent wages and better benefits), we created an array of social service programs (to protect children, the elderly, the poor, and those with disadvantages), and we imposed regulations on the business practices of Wall Street and the corporations. These things helped to keep our capitalist system from getting out of control and choking to death on its own success.

But the Republicans have never accepted that capitalism needs regulating. They still believe that “trickle-down” (or Voodoo) economics will work (in spite of its repeated failures). With the election of Ronald Reagan in 1980, they began to tear down the safeguards that had been installed in our society. They started to eliminate business regulations, strip unions of their power, dismantle social programs, and lower tax rates for the rich. This process was accelerated in the administration of George W. Bush.

workers was stagnant (and their buying power dropped substantially). This resulted in a drop in demand, which resulted in lay-offs, which killed demand even further, causing more layoffs — and this spiraled the country down into a serious recession.

And what do the Republicans think the solution to this jobless recession is? They want to cut social programs, cut taxes for the rich, eliminate unions, and eliminate regulations on businesses. In other words they want to do more of the same things that caused this economic mess in the first place. They seem to be incapable of learning from either experience or history.

They claim they are being fiscally responsible. They aren’t. What they are really doing is giving our capitalist system enough rope to hang itself — an economic suicide that could unfortunately also kill our economy (and maybe even our democracy).

5 Responses to Ted McLaughlin : The ‘Free Market’ Myth and the Suicide of Capitalism