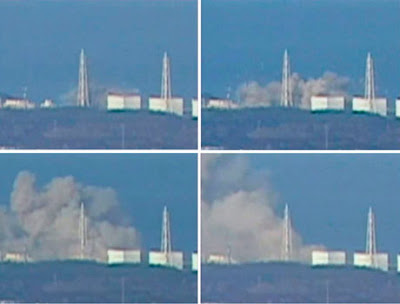 Explosion at Japan’s Fukushima Daiichi No 1 plant following Japan’s earthquake and tsunami. Image from Reuters.
After the Japan quake:
We must rethink nuclear power

By now everyone knows about the disastrous earthquake that has hit Japan. At a magnitude of 8.9 it is one of the largest earthquakes to hit any country, and it has been a catastrophe to the heavily populated nation.

As I write this the official death toll is around 700 people, but many thousands are still missing and there’s little doubt that the death toll will climb much higher. My thoughts and best wishes go out to the people of Japan in their time of need, and I hope this country will offer Japan all the aid it is possible to give.

But in this post I want to concentrate on one aspect of the disaster — nuclear power. Japan has invested heavily in nuclear power and currently receives a large portion of its electrical power from this source. But they may now be paying the price for that. At least two nuclear power plants at Fukushima have been heavily damaged and are currently in danger of a “meltdown,” which could cause a large explosion that would release heavy doses of very radioactive material into their environment.

They are trying to cool the nuclear cores down by flooding them with seawater and boron, but that is a desperate measure that will take days and no one knows if the cores can be cooled in time to prevent a meltdown. The authorities have said that little radioactivity has been released so far, but they are evacuating people from within a 12-mile radius of both plants and are issuing iodine tablets to the population living in those areas (iodine is supposed to inhibit the body’s intake of radioactivity).

And that is just what is happening at those two plants. Other plants were also damaged and are currently being evaluated. More may be heading for the same kind of trouble. The earthquake and resulting tsunami were bad enough for the Japanese people — the damaged nuclear plants are just adding to their difficulties.

Here in the United States we are currently having a debate over energy. Currently the country relies heavily on fossil fuels (oil, gas, coal) but those fuels are causing problems. Much of the oil we use comes from foreign countries — countries where the supply is always in danger (as we can see from the current problems in the Middle East).

Many on the right seem to think that this problem can be solved by just drilling more and more. But the fact is that there just aren’t enough American reserves of oil (even if we tap into our protected wilderness areas) to satisfy the addiction this country has to oil. And many experts (including our own military) believe the world is reaching (or has already reached) the point of “peak oil” — the point at which production begins to fall no matter how much drilling is done.

Coal is not a much better alternative. Although it is plentiful right now and could last for many years, it is also one of the dirtiest of the energy-producing fuels. Even with the new technologies (which industry is fighting tooth-and-nail) it continues to destroy our environment.

Using more coal will simply speed up global climate change (which is a looming environmental and economic disaster regardless of what the right-wing climate-deniers claim). Some are talking about the development of a “clean coal” technology, but this is just a myth being advanced by the coal industry. There is no such thing as clean coal, and I doubt that there ever will be.

But even if the fossil fuels weren’t damaging our environment, they will run out in the future. Coal and natural gas may be more plentiful than oil, but there is not an endless supply of any fossil-based fuel. And someday they will all disappear.

The fact is that new sources of energy must be found or developed. The ideal thing is to find renewable and clean sources of energy (like wind, solar, wave, or geothermal). So far, these sources have not been developed to the point where they could completely replace fossil fuels. That is why many in America (and elsewhere) are advocating a return to nuclear power.

After the disasters at Three Mile Island and Chernobyl, nuclear energy was put on the back burner in this country. But now the idea of nuclear power is making a comeback. Many believe it could fill the gap left by renewable sources and help to wean the country off fossil fuels. And they are quick to tell us that the technology has advanced to the point where accidents like Three Mile Island and Chernobyl couldn’t happen again.

This should give Americans pause. Should we go back to building nuclear power plants — knowing the dangers they could pose? And lest we forget, we still haven’t come up with a solution for disposal of nuclear waste from these plants (which is highly radioactive and will remain so for a very long time).

I have to say that I really don’t know what to do about nuclear energy. I like the idea that it doesn’t pollute the environment while producing energy, but I have to wonder if it’s only delaying that pollution since we haven’t solved the disposal problem. I would feel a lot better if we could figure out how to safely dispose of the nuclear waste (for many centuries). And the Japanese experience is showing us, at the very least, that great care must be taken about where any new nuclear power plants are located.

It is time to rethink the usefulness of nuclear power. Maybe it is a viable alternative, but we should carefully consider all the dangers before proceeding with building any new plants.

3 Responses to Ted McLaughlin : The Japan Quake and Nuclear Power