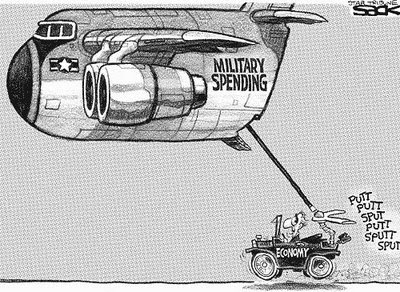 There is little doubt that the American economy is in the dumps right now. Bush used Reagan’s ridiculous “trickle-down” economic theory to give far too much of the nation’s wealth and income to the richest Americans, kicking off a serious recession that cost the country millions of jobs. Then he cut taxes for the rich and substantially increased the nation’s military budget, creating a huge budget deficit (after inheriting a budget surplus from president Clinton).

Now the right-wing Republicans in Congress are whining about the budget deficit they created. They want Americans to believe that the only way out of the current deficit crises is to cut social programs and “entitlements” (like Medicare and Social Security).

Of course they are refusing to cut any of the welfare or entitlements they have given to the rich. They refuse to eliminate the Bush tax cuts for the rich (even though the rich are richer than ever) and they refuse to cut out the subsidies for the giant corporations, especially the oil, gas and coal companies (even though these same corporations are recording record profits and paying little or no taxes).

And they also refuse to even consider any cuts to the nation’s military budget, even though it eats up a huge majority of the government’s discretionary spending. They want Americans to think that cutting the military budget would put the nation at risk of terrorist attack. Of course this is ludicrous. Law enforcement agencies have done far more to stop terrorism than the military has.

While the U.S. military is the world’s best at conventional warfare, Vietnam, Iraq, and Afghanistan have proven beyond a doubt that they are not effective against terrorism and even worse at “nation-building.” 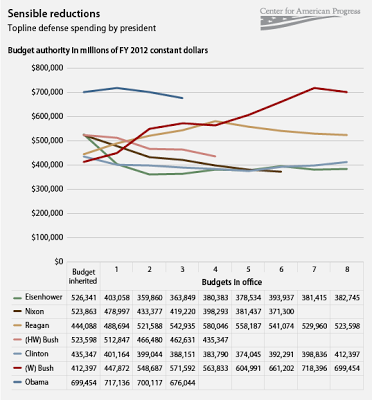 Chart from Center for American Progress.

Recognizing this fact, it would only make sense to drastically cut the U.S. military budget. The military budget (currently more than $676 billion) could be cut in half and it would still be larger than any other nation’s military spending (both in real dollars and as a percentage of Gross Domestic Product).

And they would like for voters to believe it has always been this way — with Republicans wanting a strong defense and Democrats wanting to weaken the country’s defense by cutting the military budget.

As usual, these right-wing accusations have much more to do with party propaganda than with the truth. Republicans have not always taken such a hard line on cutting military spending. Past Republican presidents have cut the military budget when it was necessary to keep government spending at a reasonable level.

While I don’t think any president of either party has cut military spending nearly as much as it should have been cut, it is a fact that presidents (and parties) in the past have recognized that when spending gets out of control the military budget is not sacrosanct. Why then, can it not be cut significantly now?

President Obama has made a small cut to the military budget — from $699.5 billion to $676 billion. That is not nearly enough. Much larger cuts need to be made (and we need to stop trying to be the world’s policeman, and forcing other countries to bend to our will through the threat or action of military force).

Cutting the military budget (and making the rich and the corporations pay their fair share of the nation’s taxes) makes a lot more sense than cutting social programs that help hurting Americans — or destroying programs like Medicare and Social Security that are working just like they are supposed to.

This nation needs to rethink its priorities. And the number one priority should be the health and well-being of its own citizens. War and welfare for the rich should be very far down that list of priorities.