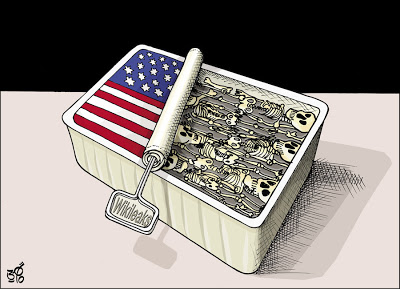 Political cartoon by samir alramahi / toonpool.com.
WikiLeaks brouhaha:
A danger to our security,
or serving the public’s right to know?

I doubt if there’s any established government on earth that can’t access that kind of information, which means the only people these “secrets” are being kept from are the voting public.

The internet site called WikiLeaks is in the headlines again, and once again they are embarrassing the United States government (and a bunch of other governments also, this time). They are in the process of releasing hundreds of thousands of U.S. State Department cables, which the government is claiming to be “classified” material.

Some of the material is just embarrassing, such as when government officials make unflattering remarks about other countries’ officials. Other cables show us some “secret” discussions between governments that could have serious repercussions for American citizens, such as cables that show that countries like Israel and Saudi Arabia have been putting a lot of pressure on the United States to attack Iran (and at least destroy their nuclear facilities).

The big question being debated right now is whether the release of these cables to the public (several news organizations are making them widely known to the public at large) poses a real danger to the United States government and the citizens, or does it just expose some things that probably should be public knowledge anyway in a democracy (regardless of whether some officials are embarrassed or not).

The Obama administration is taking the tack that the release of this information poses a danger. White House press secretary Robert Gibbs says:

To be clear, such disclosures put at risk our diplomats, intelligence professionals and people around the world who come to the United States for assistance in promoting democracy and open government. These documents also may include named individuals who in many cases live and work under oppressive regimes and who are trying to create more open and free societies.

By releasing stolen and classified documents, WikiLeaks has put at risk not only the cause of human rights but also the lives and work of these individuals. We condemn in the strongest terms the unauthorized disclosure of classified documents and sensitive national security information.

But WikiLeaks founder Julian Assange counters that the United States is just trying to cover up its participation in serious “human rights abuse and other criminal behavior.” The New York Times, which is printing some of the exposed diplomatic cables, says “the documents serve an important public interest, illuminating the goals, successes, compromises and frustrations of American diplomacy in a way that other accounts cannot match.”

After much thought, I have to agree with WikiLeaks and The New York Times. This is information that the American people have a right to know. Are there times when a government needs to keep a secret for national security? Yes. But I believe a Democratic government needs to keep as few secrets as is possible, and there is little doubt that our government keeps far too much from the voters (who have the right to know as much as possible to make intelligent decisions when they go to the polls).

If the government is just covering up embarrassing blunders or statements by government officials, then they are wrong — that kind of thing should not be a “state secret.” If they are indeed covering up human rights abuses or criminal behavior, that is even worse. The American people needs to know if its government is acting in such a way.

I also have to wonder just how secure these “secrets” were if an organization like WikiLeaks could get hold of them. Frankly, any government that sends real secrets by cable or electronic transmission in this information age is pretty stupid anyway (and that is something else the people need to know).

I doubt if there’s any established government on earth that can’t access that kind of information, which means the only people these “secrets” are being kept from are the voting public. The idea that WikiLeaks has been able to access information not available to any interested intelligence service is just ludicrous.

The most intelligent comment on this WikiLeaks mess that I’ve heard comes from Professor Michael Cox, associate fellow of Chatham House Think Tank. He says:

Diplomats have always said rude things about each other in private, and everyone has always known that. Governments have a tendency to try to keep as much information as possible secret or classified, whether it really needs to be or not. The really secret information, I would suggest, is still pretty safe and probably won’t end up on WikiLeaks.

I seriously doubt that any of these released cables will hurt the security of the United States. I do think that there will be officials of the U.S. government (and other governments) who will be embarrassed by exposure of stupid or criminal actions. That is a good thing. I just don’t care if government officials are embarrassed, and I care even less if officials from other countries are embarrassed or exposed.

The American people need to know how these other countries are thinking and acting. As for our own officials, they shouldn’t be doing or saying anything they wouldn’t want their fellow citizens to know about.

Are the folks at WikiLeaks traitors or heroes? I’m voting for heroes — albeit minor ones.