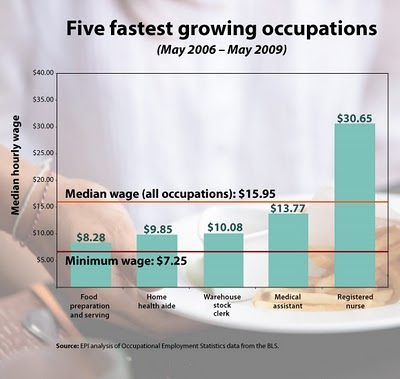 George Bush, with his policy of accelerated Reaganomics, made a real mess of the United States economy before he left office. It was not bad enough that he presided over a massive outsourcing of good American jobs, but his deregulation, tax cuts for the rich, and deficit spending created the worst income distribution since the 1920s and kicked off a serious recession resulting in the loss of millions more jobs.

In his entire eight years in office Bush only created about a million jobs (while his predecessor, Bill Clinton, created 23 million in his eight-year stint in office), and more than lost those in his recession (which started in the last part of 2007). President Obama is already poised to have created more jobs in his first two years in office than Bush did in eight years. That is a good thing, but not as good as you might believe.

The problem resides in just what kind of jobs are being created. This is not a new problem. Even back in the Bush administration, while good jobs were being sent overseas (where wages could be cut to less than minimum wage levels), the new jobs being created were low-wage jobs that would not allow a man/woman to support a family. Unfortunately, the problem is persisting under the current administration.

The chart above is indicative of the problem. The chart shows the five fastest growing jobs in the United States. Only one of those jobs (registered nurse) is above the median wage in America. The other four (food preparation and serving, home health aide, warehouse stock clerk, medical assistant) are well below the median wage and approaching the minimum wage. The problem is even worse when you consider the median wage has been depressed for the last 20 or more years and won’t buy close what it once would.

While the cost of nearly everything has climbed sharply for the last 20 years, the wages of the bottom 80% of Americans have been stagnant. This alone would have accounted for the pain being felt by middle and working class people, but it was made even worse by the millions of jobs lost by the Bush recession. Now the new jobs being created are lower-paying jobs than the ones that were lost. It’s hard to rejoice in the creation of these kind of jobs.

President Obama has said he wants to give tax cuts to companies that don’t outsource jobs (and hopefully bring good-paying jobs back to the United States). That would be a good start, but much more needs to be done. This recession will not be ended by the creation of minimum-wage jobs (even a lot of them). That would just continue the pain being currently felt by ordinary Americans. And it would set the country up for another, possibly worse, recession or depression.

The vast difference in both accumulated wealth and income distribution between the richest five percent of Americans and the rest of America was the real cause of this recession (while the financial mismanagement by Wall Street was just the trigger). The only real cure for our current economic woes is to find a way to more equitably distribute the nation’s income.

The nation’s health is not determined by how rich the richest 1-5% can get. No matter how hard they try, this small number of people just don’t have the purchasing power to keep an economy as large as ours growing. While the Republicans (and the rich) don’t want to admit it, America has always seen its best times when the working and middle class people have had adequate purchasing power to live a decent and comfortable life. When these people have the money to buy, everybody benefits — even the rich and the corporate interests.

Minimum wage jobs may be fine for high school students, but they won’t support a family. And they won’t lift this country out of the recession.

3 Responses to Ted McLaughlin : These Jobs Won’t Cut It