The graph below shows how students in many countries did on a standardized test, when the same test was given to a random sample of about 5,100 students in each country — a large enough sample to make the results pretty accurate. The test was administered by the Organization for Economic Cooperation and Development — a respected organization based in France. 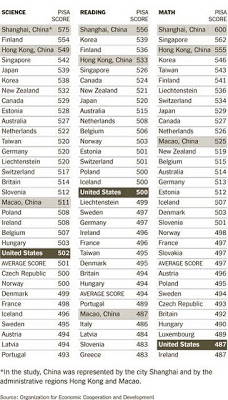 Graph from the International Organization for Economic Cooperation and Development.

The results for China was from three areas — the city of Shanghai and the administrative regions of Hong Kong and Macao. As you can see, the Chinese topped the chart in all three of the tested areas (science, reading, math). Meanwhile, the United States finished well down the list and actually scored below the average score in math. Here’s how the U.S. scored:

None of those scores is anything to brag about, especially when compared to the Chinese scores which were much higher (reading 556, science 575, math 600). Several other Asian countries (Japan, Singapore, South Korea, Taiwan) also scored significantly higher than students in the United States. The fact is that while these countries are pushing education and demanding a lot from their students, the United States is falling behind.

And we can expect China’s performance to spread out into other areas of their country. As Chester E. Finn Jr., who served in Reagan’s Education Department, says, “I’ve seen how relentless the Chinese are at accomplishing goals, and if they can do this in Shanghai in 2009, they can do it in 10 cities by 2019, and in 50 cities by 2029.”

And don’t think the Chinese somehow cheated to get those scores. A Bush administration Education Department employee, Mark Schneider, said, “The technical side of this was well regulated, the sampling was OK, and there was no evidence of cheating.”

The simple truth is that there are many countries that take educating their students more seriously than do the leaders of the United States. There is a recession going on right now and that makes it hard to fund any kind of program, but many schools were not adequately funded in America before the recession. The recession has just made it worse, since now many politicians (like those here in Texas) don’t see education as particularly important and are cutting education funds.

Many states are cutting education funds, and that means there will be fewer teachers, larger class sizes, supply and book shortages, and deteriorating facilities — all at a time when other countries are pushing education as a key to their future. President Obama talks like he understands the importance of America fixing its educational system, but he either doesn’t have the political will or political backing to do much about it.

Add to this the growing power of the far-right and you have a recipe for failure — with the educational system slipping even further behind many other countries. The right-wingers coming into power seem intent on destroying U.S. education. Instead of improving education, they want to cut funds, inject religion into science classes, substitute right-wing propaganda for real history, and avoid the setting of national education standards. Some of the right-wingers even want to abolish the Department of Education.

These right-wingers are great believers in “American exceptionalism” — the belief that America is better than any other nation. But they don’t seem to understand how America became a world leader. It was due to an excellent educational system, which at one time was the envy of the world. But that system is sliding downhill, and the further it slides the harder it will be for America to compete in this modern and changing world.

Many of those on the right think all America needs to stay on top is religion and a strong military. That thinking is not only faulty, but very short-sighted. We have recently seen that we cannot impose our will and system of government on others through military means — that has been brutally proven in Iraq and Afghanistan.

The way a nation stays strong is through excellent education and industrial and economic strength. We are in the process of destroying both. We are currently exporting many of our best-paying jobs and industries to other countries, instituting economic policies that create an ever growing gap between the rich and the other Americans, and playing games with education with cutting its funding. This is not the way to keep America strong.

Boris Yeltsin once said, “You can build a throne of bayonets, but you can’t sit on it long.” That seems to be what we are doing in America. We are continually building up our military, while cutting everything else. In the long-run, that’ll be the downfall of America (although I’m sure many right-wingers will blame that on a lack of religion and a failure to give enough money to the rich).

America can still be fixed, but not by continuing to march to the right-wing’s drumbeat.

This entry was posted in Rag Bloggers and tagged Education, Ted McLaughlin, The World. Bookmark the permalink.