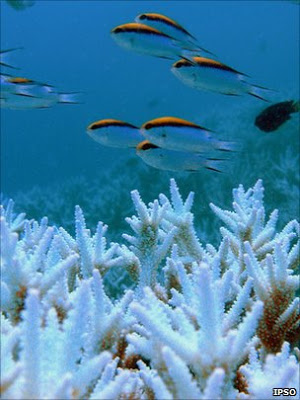 Coral reefs are subject to “multiple stressors” that could destroy many within a human generation. Image from IPSO / BBC.
Multiple factors at work:
Killing off the oceans

There has been a lot of talk in the last few years about global climate change and how it will affect the world’s land masses. But a story that has largely been ignored by most people is that the world’s oceans are also being negatively affected by mankind, and the oceans are fast reaching a critical point — much faster than previously thought.

Some people think the oceans are too vast (covering about 71% of the Earth’s surface at an average depth of 12,430 feet and a volume of 310 million cubic miles) to be affected by mankind. That is simply not true. The oceans are being affected by over-fishing, pollution, and global climate change.

In the past these three factors have been considered by themselves in how they are hurting the oceans. But a recent meeting of scientists says the factors are working together and are destroying the oceans at a much faster rate than realized even as recently as a couple of years ago. The panel of scientists, from many different scientific disciplines, met at the request of the International Programme on the State of the Ocean (IPSO).

The findings are shocking. As we considered the cumulative effect of what mankind does to the oceans, the implications became far worse than we had individually realized. We’ve sat in one forum and spoken to each other about what we’re seeing, and we’ve ended up with a picture showing that almost right across the board we’re seeing changes that are happening faster than we’d thought, or in ways that we didn’t expect to see for hundreds of years.

Ove Hoegh-Guldberg, from the University of Queensland, agreed saying,

The rate of change is vastly exceeding what we were expecting even a couple of years ago. So if you look at almost everything, whether it’s fisheries in temperate zones or coral reefs or Arctic sea ice, all of this is undergoing changes, but at a much faster rate than we had thought.

The scientists believe we are facing a “globally significant extinction event” in the oceans. The last one was 55 million years ago, and was caused by a disturbance of the carbon cycle, acidification, and the depletion of oxygen in the seawater. We are facing the same things now (only caused by man this time and at an accelerated rate), and the level of CO2 being absorbed by the oceans is already greater than in that last extinction event.

IPSO will be issuing a report and making a presentation to the United Nations later this week. But they have already made three recommendations which they believe should be implemented immediately. They are:

This is a serious problem that could have drastic negative effects for all of mankind. I wish I could say that the world’s leaders will see this as that serious and begin to take action. But I don’t believe they will. Just look at all the procrastination that has already taken place in dealing with global climate change, even with over 90% of the world’s scientists agreeing that action must be immediately taken.

Last year’s climate conference in Mexico ended with no real action taken, and another climate conference has just ended in Germany, again with no action agreed to. And the United States is one of the biggest impediments to getting anything done. The corporate interests are making far too much money, and passing new rules that would stave off global climate change (including oceanic changes) might cut into their profits — and that is something they and their Republican lackeys are not about to let happen.

And as long as the United States refuses to agree to changes to protect the climate and the oceans, there is very little chance that the rest of the world will do so. Poet T.S. Eliot once said the world will end with a whimper and not a bang. He was close. That whimper will actually be the sound of dollar bills as corporate profits are counted and the world slowly dies.