For the first time in this country’s history, more than half of the members of Congress are at least millionaires. 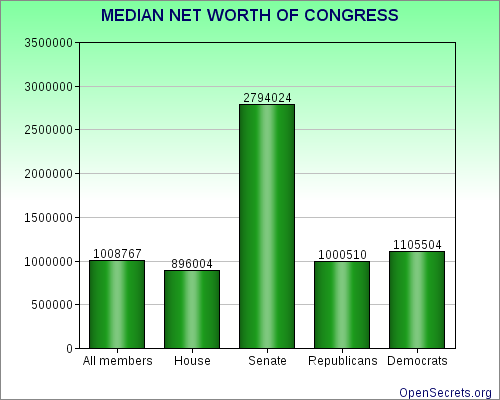 These are the most recent figures available because the members must submit a financial statement in May of each year, and it takes a substantial amount of time for the good folks at OpenSecrets.org to comb through those reports and decipher them. These figures are from the reports submitted in May of 2013 (and reflect their finances for the previous year).

And this latest Congress passed a landmark percentage. For the first time in this country’s history, more than half of the members of Congress are at least millionaires (50.19%, or 268 out of the total 534 members). This surpasses the last Congress, where 48% of the members were at least millionaires. And even most of those who don’t quite reach the millionaire status have significantly more wealth than the majority of Americans.

Even the “poorest” member of Congress (if that word can be applied to any member of Congress) brings home far more than most Americans. While the median income for the general population is slightly above $40,000, A member of Congress (without a leadership position) makes $174,000 (not counting the various expense accounts, tax breaks, generous retirement, and other perks).

It becomes obvious that any member of Congress would need a vivid imagination to comprehend the financial struggles of ordinary Americans.

Considering the above facts, it becomes obvious that any member of Congress would need a vivid imagination to comprehend the financial struggles of ordinary Americans. Most of them have never had to struggle financially, and those that once did have left those struggles behind long ago.

This should give you a clue as to why the policies pursued by many of them favor the rich. They are simply voting to protect their own interests. And those who do try to do something for ordinary Americans usually come up with policies that fall far short of what is really needed — because that need is not theirs, and they don’t comprehend the real need. 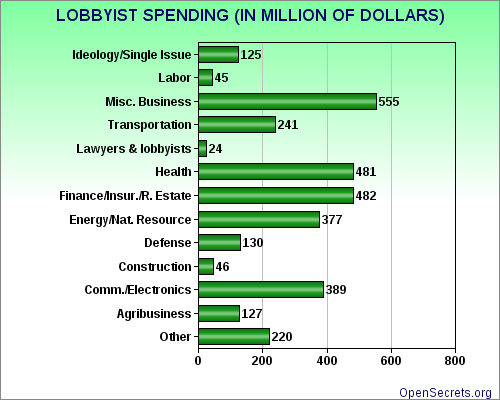 And all of that is before you even consider the huge effect that lobbyists have on the policies that Congress pursues. The chart above (also from information provided by OpenSecrets.org) shows the amount of money spent by various interests on lobbying Congress. Only one of those interests represents ordinary working Americans (the Labor lobbyists), and the money it is able to spend pales in comparison to the many billions spent by other lobbyists (representing various business interests).

Then we come to campaign funds. Lobbyists funnel big donations into congressional campaign chests, which too often are used to pay large salaries to family members, or are saved up for their retirement (when the rules on spending that money are loosened).

Is it any wonder that the interests of the rich and the corporations are foremost in the minds of member of Congress — and the interests of ordinary Americans are little more than an afterthought for most of them?