Ten Reasons for Optimism About 2009 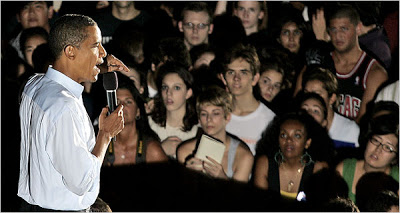 We’re entering a new year at a time unlike any other in recent memory. Here are 10 reasons I’m filled with hope as I look ahead at 2009—and three reasons I’m terrified.

1. Young people are stepping up. They know that they formed the backbone of Barack Obama’s presidential campaign and that their work infused the country with the “Yes, we can” spirit. Now that these young people know what success feels like, many will be in it for the long haul.

2. Election protection is working. Grassroots vigilance, successful lawsuits, and media exposure are making voter suppression efforts less successful. More remains to be done, but the trends are in the right direction. (One terrifying note, though, is the death in a December 19 plane crash of GOP IT expert Michael Connell, who many believe was poised to reveal secrets related to vote stealing.)

3. There is now overwhelming support for universal health care. This grassroots commitment coupled with Obama’s leadership could make this the year when we finally overcome the roadblocks big insurance and drug corporations have placed in the way of progress. A majority of Americans favor a tax-supported single-payer system like Canada’s. The Obama plan, while it’s not single-payer, is nonetheless a good plan—as long as it retains the option for all Americans to join a public health insurance plan.

4. Corporate power is on the wane. Barack Obama ran for office without relying on corporate donations in a campaign that saw candidates competing to establish their tough-on-corporate-power bonafides. Even before the Wall Street meltdown, a majority of Americans thought corporations had too much power. The economic collapse is further eroding goodwill towards corporations and big finance, showing instead how both were instrumental in concentrating wealth, creating unsustainable bubbles, and putting our way of life at risk. After the trillions of taxpayer money paid out in corporate bailouts, the American people are looking for more fair and sustainable alternatives.

5. The failing economy is giving us lots of reasons to be terrified (see below) but also reasons to be hopeful. That rip-roaring economy we’re all supposed to be trying to bring back was tearing through the world’s rainforests, mountaintops, aquifers, fisheries, soils, and other resources, driving thousands of species toward extinction, changing the climate, and leaving billions behind in the rush for “economic growth.” So, painful as it might be, this downturn represents a chance to build a different sort of economy—one that offers dignity, livelihoods, and a future for our children.

6. We’re finally getting real about the urgency and scope of the climate challenge. The incoming Obama administration takes science seriously, which means taking climate change seriously, too. The nay-sayers have quit denying the existence of global warming, and have resorted to random delay tactics. Many now see the conversion to a climate-friendly economy as a major opportunity, with new jobs and investment needed to weatherize buildings, re-tool factories, develop renewal sources of energy, and rebuild transportation infrastructure (see below for the terrifying flip side).

7. Social movements are building people power. Nonviolent civil disobedience is back. Climate organizers conduct “die-ins” and climate camps to shut down coal plants. Workers at Republic Windows & Doors occupied their factory when they were abruptly dismissed without severance and vacation pay. President-Elect Obama backed the Republic workers, implicitly inviting others to stand up for their rights. He also continues to organize people at the grassroots—right now through health care discussion groups. Thousands of these meetings being held across the country could build a health care reform movement with enough clout to overcome entrenched interests and move forward. (We may wind up calling Obama, Organizer-in-Chief.)

8. DIY (do it yourself) communities are piloting the shift to a people-centered society. These folks understand that real security during tough times is found in the “social capital” of community. At the same time, they are creating experiments in green and just ways of life. They aren’t waiting for policy changes or bailouts, instead, they are helping each other now and getting on with the most extraordinary project of our time: building a better world.

9. International cooperation is now possible, and it’s none too soon. The day of the lone wolf is over. Likewise, the day of the sole superpower that could bend the rest of the world to its will. Climate change, nuclear proliferation, failed states, the Israel-Palestine conflict, the collapse of ocean fisheries, outbreaks of genocide, environmental and human rights refugee crises, HIV/AIDS and other pandemics—all require international cooperation. That means everyone has a seat at the table, no one gets bullied, and the solutions have to be real ones.

10. Obama! It’s true, he hasn’t lived up to all our hopes with his cabinet picks. On the left-right scale, he’s been pretty centrist, and especially his choices for foreign policy and agriculture posts suggest he may repeat the mistakes of the Clinton and Bush appointees he is surrounding himself with. But on the people-versus-big-money scale, he leans towards people and the common good, as the examples above illustrate. And he has elevated the national dialogue, setting a new standard for intelligent, inclusive, nuanced leadership.

Not bad to be coming into the new year with 10 reasons to be hopeful. That’s as good as it’s been for awhile. But there are also some good reasons to be terrified:

1. Runaway climate change. The biggest question of the 21st century may be whether policies can catch up to the dangerous realities of a rapidly changing climate in time to avoid disaster. Will we come together to stabilize the climate? Or are we to be the last generation to live on a planet that can support complex civilization?

2. Loose nukes. We are all in danger from loose nukes, the spread of nuclear materials around the world, and nuclear warfare between India and Pakistan or other nuclear-armed adversaries. Ridding the world of nuclear weapons may be the only way of avoiding a nuclear catastrophe; figures across the political spectrum support such proposals, including former Secretary of State George Shultz. Will we have the political will to rid ourselves of this danger?

3. Mad Max world. Disruption of life-as-usual could come from economic collapse, runaway climate change, war, peak oil, pandemics, or some unforeseen combination of these and other factors. What makes these prospects especially terrifying are potential human responses to them. We could see either societal breakdown—in which each person turns on others in a battle for dominance or survival—or fascism, in which people allow all-powerful leaders to run things out of fear of chaos.

So which will it be? Are you hopeful or terrified by the coming year and by what we face in the coming decades? What I keep coming back to is this: we humans have the free will to make choices that assure our collective survival, or to do otherwise. We do have the creativity, compassion, and intelligence to build on the best possibilities while averting the worst. This historic moment will test everything we have built and everything our ancestors have passed down to us. The answers are readily available, embedded in all the world’s spiritual traditions, in all the mothers and fathers who have sacrificed to make a good life for their children, and in all the peacemakers who have worked to build a better world for everyone. Will we make the choices for a just and sustainable world? We know, as Obama says, that, indeed, Yes! we can. But will we?

[Sarah van Gelder is the Executive Editor of YES! Magazine.]

This entry was posted in RagBlog and tagged American Society, Existential Angst, Politics. Bookmark the permalink.