Texans by the Thousands Rally to Protest California’s Prop. 8 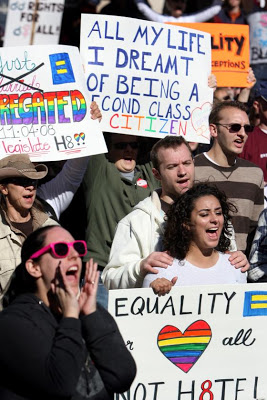 A rally against Proposition 8, which banned same-sex marriages in California, drew more than 2,000 to Austin City Hall Plaza on Saturday. Protests were held in Dallas and Houston and across the U.S.

Thousands upon thousands marched throughout the United States to show their anger at the passage of California’s Proposition 8. From all indications we are seeing the birth of a movement. The Rag Blog will publish more about this massive action across the continent, but below is an early take on protests in Texas.

DALLAS — About 1,200 people gathered outside Dallas City Hall on Saturday to protest passage of California’s Proposition 8, which banned same-sex marriage in that state.

Across the country, gay rights advocates urged supporters not to quit the fight for the right to wed.

Rallies were also held in Houston, San Antonio and Austin, where about 1,000 people attended a protest at City Hall [more than 2,000 according to other reports].

In Dallas, Louise Young, who attended the event with her partner, Vivienne Armstrong, said the issue involves legal rights.

Etta Zamboni, who organized Dallas’ rally, told The Dallas Morning News that the California measure has galvanized gays and lesbians to step up the battle for gay rights.

Across from Dallas City Hall, Angela Cummings, 38, of Irving, and nine other people protested the rally with a bullhorn and a cross. No confrontations occurred between the two sides, but gay rights activists filed complaints against the group with police.

Disappointed and angry about the passage of Proposition 8 in California last week, at least 2,000 people crowded Austin City Hall Plaza on Saturday afternoon to support equal rights and legal marriage for those who are gay, lesbian, bisexual and transgender.

Gay rights supporters cheered, chanted and waved rainbow colors in Austin and in cities across the country protesting the vote that banned gay marriage in California. Tens of thousands of people joined protests in Houston, Dallas and Arlington as well as Boston, San Francisco and Chicago, renewing efforts to make gay marriage legal.

1 Response to Texans by the Thousands Rally to Protest California’s Prop. 8