Texas and the Killing Chamber 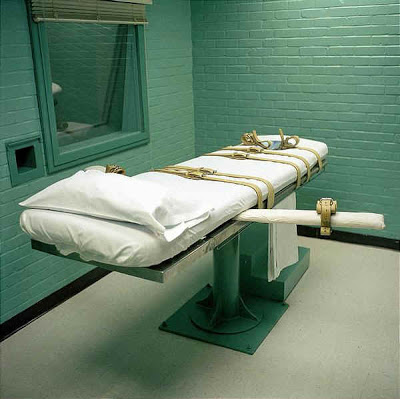 ‘At the execution facility in Texas, there is seating for people who have come to take their satisfaction from seeing an act of death.’

I don’t know much about death. I’ve seen very little of it up close, and I’d like to see less of it on TV. But I have this idea that the less death we cause each other, the better.

At the execution facility in Texas, there is seating for people who have come to take their satisfaction from seeing an act of death.

Why should any thief be allowed to keep what he has stolen? Has the killer not stolen life itself?

On another side of the killing chamber, Texas provides seats for the family and guests of the executee. Now it must be terrible enough to be told that your loved one has been killed. But to mark on your calendar a date and then travel to Huntsville and take a seat at some appointed time and watch? I have trouble seeing how that can seem like a fair thing to put somebody through.

At least three times recently in Texas, the people who watched the death act did not see a killer killed, because the executee was later discovered to be innocent. In those three cases, what would we call what the witnesses to death are going through today as they think about watching the killing of an innocent man?

We live in an age of pop probabilities. People who hate statistics most of the time can argue pretty quickly that the percentage of wrongful killings on death row is acceptable. It’s like the way we average the news of collateral damage. In the effort to kill rightly we sometimes kill wrongly. Doesn’t make right wrong, does it?

Last week in Texas they held two scheduled killings. One was filled with witnesses and a real, last-minute act. The executee accused one of the victims of at least two of the killings as the victims’ families looked on.

The other execution was silent, apparently. Nobody came to watch. Nothing was said.

Will Texas next week be a better state thanks to last week’s two killings? Have two thieves been forced to return what they had stolen?

There is no returning a stolen life.

2 Responses to Texas and the Killing Chamber