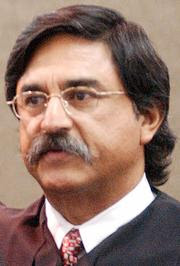 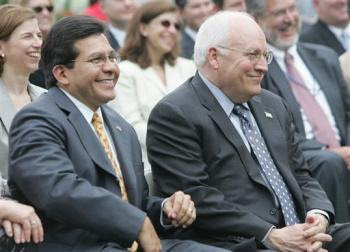 The highest-profile indictment charges Cheney and Gonzales with engaging in organized criminal activity. It alleges that the men neglected federal prisoners and are responsible for assaults in the facilities.

RAYMONDVILLE, Texas — A Texas judge has set a Friday arraignment for Vice President Dick Cheney, former U.S. Attorney General Alberto Gonzales, a state senator and others named in indictments accusing them of responsibility for prisoner abuse in a South Texas federal detention center.

Presiding Judge Manuel Banales said Wednesday he will allow them to waive arraignment or have their attorneys present rather than appear in person at the hearing.

Banales also said he would issue summonses rather than warrants for the indicted since all have served in some public capacity. That would allow them to avoid arrest and the need to post bond.

After the prosecutor who won the indictments, lame duck Willacy County District Attorney Juan Angel Guerra, was a no-show in court, Banales ordered Texas Rangers to go to his house, check on his well-being and order him to court on Friday.

That was only the latest development in a situation that has lawyers from Texas to Washington, D.C., scratching their heads.

Half of the eight high-profile indictments returned Monday by a Willacy County grand jury are tied to privately-run federal detention centers in the sparsely populated South Texas county and the other half target judges and special prosecutors who played a role in an earlier investigation of Guerra.

Tony Canales, an attorney speaking on behalf of attorneys for Cheney and Gonzales and representing private prison operator The GEO Group, subpoenaed Guerra’s office manager to stand in for her boss.

Banales questioned Hilda Ramirez about her boss’ whereabouts, but got nowhere.

“I have been calling Mr. Guerra all day. I have not had him answer,” Ramirez told the judge. “I don’t know what to do.”

If Guerra does not appear Friday, Banales said he would likely appoint a temporary replacement.

The chance for further delay frustrated a courtroom packed with attorneys. Even though Banales said he would not hear their motions until Friday, they argued the indictments were improperly handled and the product of a vindictive prosecutor. All of the defendants had filed motions to dismiss indictments. They complained that Guerra had time to talk to the media about the indictments Tuesday, but did not show up for court Wednesday.

David Oliveira, Canales’ partner, said after the hearing, “the news media told him there was a hearing today and he ran.” Canales asked Banales to consider holding Guerra in contempt. Canales said if Guerra shows up Friday, he will put him on the stand.

The highest-profile indictment charges Cheney and Gonzales with engaging in organized criminal activity. It alleges that the men neglected federal prisoners and are responsible for assaults in the facilities.

The grand jury traced a sketchy line between Cheney’s influence over the U.S. Immigrations and Customs Enforcement agency, which oversees the county’s federal immigrant detention center, and his substantial holdings in the Vanguard Group, which invests in private prison companies.

Combining those interests, the grand jury accused Cheney of a conflict of interest because the more the prison companies were paid to hold inmates, the better he did financially.

“It is appalling to find that numerous elected officials from different levels of our government throughout our country to our U.S. Vice President Richard B. Cheney, defendant, are profiting from depriving human beings of their liberty,” the indictment said.

The indictment accuses Gonzales of stopping an investigation into abuses at the federal detention center.

Canales filed two motions Wednesday accusing Guerra of “prosecutorial vindictiveness” and of not presenting the indictments to the trial court.

In one motion, Canales said Guerra had hijacked “the grand jury process and disregarded the requirements of the Code of Criminal Procedure designed to protect defendants’ due process rights.”

“You can’t have district attorneys across the country bringing charges against federal officials,” Treece said. If there are issues at the federal detention centers, then Guerra should turn the investigation over to the federal government, he said.

And even in a federal probe, Cheney and Gonzales have a “qualified privilege” that would protect them so long as they were acting within their jobs, Treece said.

The attorney for state Sen. Eddie Lucio Jr., who was indicted on a charge of profiting from his position through his consulting work for private prison companies, said that on the chance the indictment was not dismissed he wanted to go to trial before Guerra’s term ended this year. Banales set a Dec. 8 trial date, if necessary.

“I think it shows that this has just been a game,” Michael Cowen, Lucio’s attorney, said of Guerra’s absence after the hearing.

At times Wednesday it did seem like a bizarre game.

Since District Clerk Gilbert Lozano is under indictment, Banales decided he needed to appoint a temporary replacement to handle the cases. He asked Lozano for a recommendation, but Lozano said his top deputy is a witness and his next choice was out of town. Banales instead turned to his left and gave the job to a clerk from the 197th district, whose boss District Judge Migdalia Lopez is also under indictment.

Some attorneys argued that Banales may not even have the authority to schedule an arraignment because the indictments before him were invalid. One lawyer said Guerra never should have been allowed to present the cases to the grand jury because at least four of the indictments deal with people who had some role in the investigation of his office last year.

“He is the witness, the victim and the prosecutor,” said the attorney for Mervyn Mosbacker Jr., a former U.S. attorney who was appointed special prosecutor to investigate Guerra.

Lozano, the county clerk, District judges Janet Leal and Lopez, and special prosecutors Mosbacker and Gustavo Garza, a longtime political opponent of Guerra, were all indicted on charges of official abuse of official capacity and official oppression.

The grand jury tied all of their charges to an earlier investigation of Guerra’s office.

Banales dismissed an indictment against Guerra last month charging him with extorting money from a bail bond company and using his office for personal business. An appeals court had earlier ruled that Garza was improperly appointed as special prosecutor to investigate Guerra.

After Guerra’s office was raided as part of the investigation early last year, he camped outside the courthouse in a borrowed camper with a horse, three goats and a rooster. He threatened to dismiss hundreds of cases because he believed local law enforcement had aided the investigation against him.

Guerra has been in office nearly 20 years, but was defeated for re-election in the March Democratic primary.

Also see Ritmo: Inhumane Texas Detention Center Should be a Crime. Cheney or No Cheney. by Will Bunch / The Rag Blog / Nov. 19, 2008

And Cheney and Gonzales Indicted in Texas : Abuse of Federal Prisoners / The Rag Blog / Nov. 18, 2008

2 Responses to Texas : Arraignment Set for Cheney and Gonzales