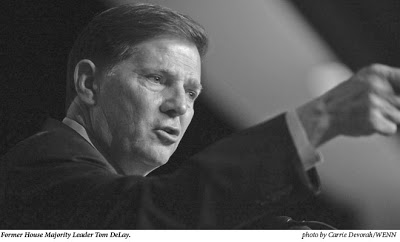 The Hammer his own self. Photo by Carrie Devorah / WENN.
Court Writes Delay a Blank Check
By Andrew Wheat / September 19, 2008

Two years after scandal drove Tom DeLay from Congress and six years after DeLay allegedly violated state law to make over Texas’ congressional map, a state appeals court recently hammered out a stunning legal opinion that did all it could—and more than it should—to rescue DeLay and two fellow indicted cronies. Freeing jurisprudence from the shackles of prudence, the ruling is a tour de brute force that is every bit worthy of the man for whom it was written.

Acting on a pretrial appeal by two cronies who helped DeLay run the Texans for a Republican Majority PAC in 2002, three Republican state judges on the Austin-based Third Court of Appeals twisted their August 22 ruling into a would-be DeLay rescue rope. Travis County District Attorney Ronnie Earle had indicted John Colyandro of Austin and Jim Ellis of Washington, D.C., in 2004 and 2005 on charges that they raised illegal corporate contributions for TRMPAC and illegally laundered $190,000 of the funds though a Republican political committee in Washington. (DeLay faces similar laundering charges.) The appeal that Colyandro and Ellis filed three long years ago argued that the state laws they allegedly broke are unconstitutionally vague.

Rejecting the defendants’ arguments, most of the court’s 22-page opinion belabors the well-established constitutionality of laws that prohibit corporate campaign contributions in Texas. What’s notable is that it took the judges so long—in words and years—to tackle a no-brainer.

Next, the judges address claims that the money-laundering law that Earle invoked is unconstitutionally vague. The GOP judges do their best to spin gold from straw. DeLay, Colyandro, and Ellis all face money-laundering charges for transactions that occurred shortly before the November 2002 election. That’s when TRMPAC sent a $190,000 check to an arm of the Republican National Committee. Two weeks later, the committee sent a total of $190,000 in campaign contributions to seven TRMPAC-backed legislative candidates in Texas. Earle argues that TRMPAC used this financial round-trip to funnel corporate contributions illegally to Texas legislative candidates.

The Austin judges crafted a semantic escape hatch, arguing that the money-laundering law applied to money—but not to TRMPAC’s checks. The law says a person commits a crime when he or she “conducts, supervises, or facilitates a transaction involving the proceeds of criminal activity.” The law defined these “proceeds” as “funds” such as domestic and foreign currency. Since the law did not specifically say that checks are “funds,” the GOP judges wrote that the money-laundering statute does not apply to TRMPAC’s $190,000 check—or the seven smaller checks that it begat.

To support this claim, the judges cite differences between checks and cash—differences that vanish the instant a check is cashed, of course. The opinion notes that checks might not be converted to cash if the signature is forged, the check writer stops payment, or the check bounces. Yet none of these scenarios applies to the eight checks involved in the TRMPAC case. Those checks performed exquisitely as cash. In a defining moment, the judges wrote, “It is too much of a leap for us to conclude that a reasonable person of ordinary intelligence would look at the pre-2005 version of section 34.01 and be aware that it intended to criminalize the ‘laundering’ of checks.” In fact, this is precisely what reasonable, intelligent people would conclude—were they not trying to help fellow party activists beat a criminal rap.

The Republican appeals judges admit in a footnote that the Dallas-based Fifth Court of Appeals previously upheld two money-laundering convictions involving checks. Gary Lee got 20 years and a $10,000 fine for laundering the $29,000 check that he induced a 92-year-old victim to pay him for phantom home repairs. Insurance scammer Michael Lee Davis got 60 years and a $10,000 fine for charges that included laundering checks (Davis recruited people at AIDS resource centers to conceal their illness while selling their life insurance policies to investors). Both of these crooks failed to use the checks-are-not-funds defense. If they had, can anyone visualize their actually beating their raps in a Texas courtroom? If the pixels won’t align, repeat the exercise. This time, imagine the crooks raising this defense before judges who are heavily biased in their favor. Voila!

After the court issued its all-Republican opinion, Democratic Justice Diane Henson issued a scathing dissent that panned her colleagues for improperly tackling the check issue in what should have been a narrow, expedited, pretrial review. The four Republicans on the court then overruled a request by their two Democratic colleagues for all six justices to review the TRMPAC appeal. Democratic dissenter Henson and two of the Republicans who signed the opinion, Alan Waldrop and Bob Pemberton, were all narrowly elected in 2006 with less than 52 percent of the vote. The opinion’s third GOP signatory, Chief Justice Ken Law, faces Democratic challenger Woodie Jones this November.

A major disagreement between the TRMPAC majority opinion and the dissent is over the significance of a law that the legislature passed after the first TRMPAC indictments, in September 2004. In May 2005, lawmakers approved a measure, House Bill 3376, that explicitly says checks are “funds” that can trigger money-laundering penalties. The Democratic dissent says legislators simply made explicit what the world knew all along: Checks are funds. The GOP justices argue that the Legislature did not make checks money-laundering funds until the new law took effect on September 1, 2005. Note that this date came three years after TRMPAC’s alleged crimes, one year after Earle filed his first TRMPAC money-laundering charges, and several weeks before DeLay’s initial indictment on September 28.

All this raises intriguing questions: What was the genesis of the Legislature’s 2005 tweaking of the money-laundering statute? Did TRMPAC’s beneficiaries push the bill to hand activist GOP judges a tool? Did Earle’s helpmates push it in a lame effort to fix the DA’s laundering indictments (the tweak did not apply retroactively to TRMPAC’s actions)? Or—to the dismay of conspiracy theorists of every stripe—did the tweak occur for reasons unrelated to TRMPAC?

The Houston Chronicle’s Rick Casey recently pointed out that the author of this legislative tweak is none other than Republican state Rep. Larry Taylor of Friendswood. As a House candidate in October 2002, Taylor received one of the $20,000 checks that TRMPAC allegedly laundered. (Taylor even cashed the check into “funds.”) As a freshman lawmaker six months later, Taylor testified before the House Insurance Committee on his bill. He and other witnesses said that the measure implemented suggestions that prosecutors and insurers made to better prosecute insurance fraud.

Several interesting moments are evident when tapes of that hearing are reviewed three years later. For example, Insurance Committee Chair John Smithee, an Amarillo Republican, voiced unease that his panel “isn’t really accustomed to getting penal-code-type statutes.” Taylor testified that his bill just targeted insurance fraud (his bill’s money-laundering provisions have no such limitation). “I don’t want to get involved in a lot of spillover into other areas,” he told the committee. To prevent unintended consequences, Taylor assured the chair that the bill would be vetted by an expert in criminal law: then-Rep. Terry Keel, an Austin Republican. This was a striking choice in retrospect. A former prosecutor in Earle’s office, Keel made a failed 2006 bid for the Texas Court of Criminal Appeals (the court of last resort for criminal matters like the TRMPAC case). Last year, when the House parliamentarian abruptly resigned during a mutiny over the autocratic rule of TRMPAC-backed House Speaker Tom Craddick, the speaker appointed Keel as his parliamentarian.

If a vast, right-wing conspiracy was under way in 2005, it seemed to catch Earle off guard. Several attorneys from his office formally registered with the House Insurance Committee in support of Taylor’s bill. The only one who testified said that the money-laundering statute had frustrated her office’s ability to prosecute a car-crash ring that laundered checks from fraudulent health care claims. “The way the money-laundering statute was worded at the time, it was too cumbersome—it was not worth it—to even try to prosecute under that,” Assistant District Attorney Barrett Hansen testified. Parts of Hansen’s testimony about the statute could be confused with passages in the TRMPAC opinion that GOP judges issued three years later. “I think when it was originally drafted, it [the laundering law] was meant to apply only to proceeds from drug transactions,” Hansen told the committee. Responding to questions about this testimony, Assistant District Attorney Holly Taylor told the Observer that her office always has believed that applying the old statutory language to laundered checks is “cumbersome,” but “our office has never maintained that it is impossible.”

The TRMPAC case now returns to semi-retired Judge Pat Priest, who must decide what to do with the appellate court’s editorializing on the inapplicability of money-laundering laws to checks dated before September 1, 2005. If Priest, a Democrat, hews to the line of Justice Henson’s dissent, the TRMPAC defendants surely will return to the Republican-controlled appeals court. All this illustrates the insanity of having judges wage partisan campaigns funded by interests with cases before the courts. Texas’ judicial system has a congenital, obstetrical defect that results in recurring miscarriages. Until this corrupt system is reformed, the Texas Election Code should be amended with a disclaimer that reads, “The ruling party can violate any provision of this law with impunity.”

[Andrew Wheat is research director of Texans for Public Justice.]

Thanks to David McQueen / The Rag Blog