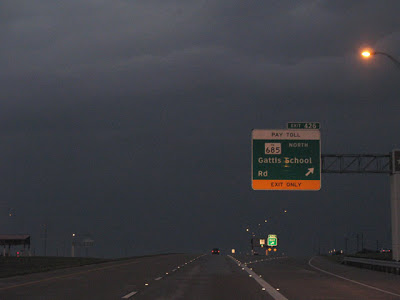 Northbound Texas Toll 130 at the Exit 426 off-ramp. This toll road northeast of Austin opened for traffic in 2006.
‘An irresponsible and immoral idea”
By Paul Burka / August 23, 2008

I doubt whether Rick Perry, David Dewhurst, or Tom Craddick has ever heard of the Lane Cove Tunnel in Sidney, Australia. If they had, they might not be so eager to raid the teacher and state employee retirement funds to build toll roads.

On the day the Olympics opened (08/08/08), the Sidney Morning Herald carried the news that the tunnel “is rapidly turning into a bottomless pit for its financial backers….” Two credit rating agencies, Standard & Poor’s and Moody’s, have warned that the toll road could default on its $1.1 billion debt with a year. The tunnel has suffered three consecutive monthly dropoffs in traffic usage. The estimated usage before the road was built was 100,000 vehicles per day; actual numbers in June and July barely exceeded 50,000. A Standard & Poor’s analyst predicted that unless the project gets fresh capital (at least half a billion dollars), it will default within 10 to 16 months. Perhaps TxDOT, since it is such a believer in such projects, would like to invest.

The problem with the financial wheeling and dealing with retirees’ funds that Perry, Dewhurst, and Craddick have proposed is that toll road projects are risky investments. They are risky for two reasons. One is that they are subject to economic fluctuations that affect people’s driving habits, such as the price of gasoline or the pace of development. The second reason is that, when government is involved, they are vulnerable to political pressure and favoritism. Google “toll road defaults” and you will find a trove of stories with unhappy endings. The Camino Columbia toll road in Laredo, which was rife with political intrigue over which landowners would benefit from having a road go through their property, opened in 2000 and defaulted in 2004. Cost: $90 million. Auctioned off for: $12 million. Tx-DOT bail out acquisition payment: $20 million. The Dulles Greenway toll road to Washington’s Dulles Airport defaulted on its bonds within a year of its opening in 1995. The private owner, Toll Road Investors Partnership II, have lost money every year since the road opened. When toll roads lose money, tolls go up–in this case, to $4.80 by 2012. That works out to an astronomical 35 cents per mile. There are similar stories in Orange County, California (where the state had to buy failing toll lanes), and along Florida’s west coast, and near Richmond, Virginia, where the 8.8-mile Pocohantas Parkway, financed with tax-free bonds, has suffered around a 50% shortfall in projected toll receipts; the state has had to maintain the road because the private owners don’t have the money. Bond ratings have been lowered to below investment grade. To pay off the bonds, the toll was increased by 50%.

It is true that many toll roads have been success stories. In Texas these include the Dallas-Fort Worth Turnpike, which paid off bondholderes with toll revenues after thirty years and became free Interstate 30; the Dallas North Tollway and its northern extension; and the Sam Houston Tollway on the west side of Houston. The issue here is not toll roads per se. It is toll roads built with pension funds (and probably other investment funds as well, such as the Permanent School Fund and the Permanent University Fund). These are trust funds. They belong to the members. It is morally wrong to require fund managers to invest them in risky ventures like toll roads. Does anybody doubt that there will be pressure on the pension funds to invest in certain projects that favor certain people and certain contractors and certain areas? We all know what kind of people we are dealing with here. Rick Perry can’t resist it. He appointed the members of the boards that oversee the pension funds. These deals will be neck-deep in politics.

The Statesman’s story on the leadership’s plan quotes Britt Harris, the chief investment officer of the Teacher Retirement System, as saying that investments in infrastructure made sense if the proposal was “equal or better than something we can get [in another project].” Harris then pointed out that the fund’s “ultimate loyalty is to the members,” not to target investments based on geography or politics. The last clause does not appear in quotation marks in the article. Bravo for Britt Harris, but I think he should keep his resume updated.

The biggest risk in toll roads as investments is political pressure. The pressure comes in two forms. The first is pressure on the consultants to provide favorable projections for use of proposed toll roads. Does anybody trust TxDOT–or the consultants they hire, or the private entities they seek to contract with–to do hardnosed, accurate projections? If you do, then consider these comments from an article in Business Week several years ago, at about the time Rick Perry was unveiling his proposal for the Trans-Texas Corridor:

* “There is a history of feasibility studies for toll roads being overly optimistic,” says John J. Hallacy III, director of municipal bond research for Merrill Lynch and Co.

* “Of the 10 major private toll roads constructed since the mid-1990s, nearly half carry far less traffic than projected. Some $4 billion in toll road bonds risk default over the next five years unless they’re refinanced,” estimates Robert H. Mueller, a municipal bond analyst at the J.P. Morgan securities Inc.

What about financing toll roads with bonds? Well, don’t expect bond raters to give the bonds a good rating. I’m quoting here from an article that appeared eight years ago in a tollroad industry publication, so it is possible that things may have changed, though I doubt it. Credit is much harder to get today than it was in 2000.

Fitch-ICBA, the New York bond rating agency says that there is a permanent bifurcation of the toll road bond market. Established systems of toll facilities can expect to be rated in the range A to AA, whereas most standalone and startup toll facilities will be rated BB- to BBB. They see a continuing demand for new toll road financings because of what they call a “seemingly unbridgeable gap” between highway needs and the ability to finance them with tax monies that toll projects can often help to fill.

According to BondsOnline, bonds rated BBB are “lower medium grade” and bonds rated BB- are “speculative.” The lower the bond rating, of course, the higher the interest rate that bond buyers demand. No one is going to be getting any bargains on toll road bonds. And AAA ratings are just a dream: “Fitch says that the ever present possibility of state governments siphoning off surplus toll revenues or leveraging them for other borrowings prevents state owned turnpikes from achieving the AAA rating.” So how can asking pension funds to invest in these bonds ever be a prudent investment? It can’t.

The article continues: Another problem with bonds for highways is that bond rating houses distrust state governments. It is unlikely that any state owned turnpikes will ever reach AAA: The key reason is susceptibility to political interventions.

I have said this before, and I will say it again. There is a sensible way to finance roads. It is to increase the gasoline tax and index it to inflation in the highway construction index. The gasoline tax has some weaknesses. Part of it is diverted to public education. People drive less when gasoline prices go through the roof. Cars are more fuel-efficient. All of this cuts into the revenue potential of the tax. Nevertheless, Texans still love their cars. The suburban lifestyle here is designed around the automobile. Even if the revenue per mile driven is declining, there is a lot of life left in the tax. A portion of the revenue could be dedicated to paying off the bonds for toll roads. This should be capped to ensure that money will still be available for free roads. While the resistance to tax increases is formidable, so is the resistance to toll roads. If you can persuade the public that a gasoline tax increase will reduce the need for toll roads, I think that proposition could be sold. Anything is better than insisting that the savings of retired teachers and state employees be invested in risky ventures like toll roads.