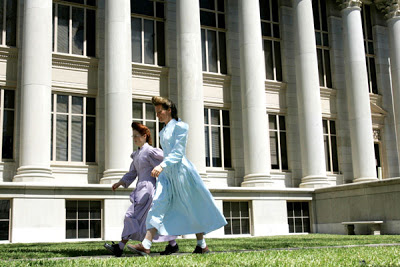 SAN ANGELO — A Texas appeals court ruled today that a San Angelo judge exceeded her discretion when she ordered the state to take custody of children from a polygamist sect.

The order by a panel of the 3rd Court of Appeals in Austin gave State District Judge Barbara Walther 10 days to vacate her order, which applied to more than 460 children.

It wasn’t immediately clear whether the decision means the children will be returned right away to the custody of their parents, followers of a breakaway Mormon sect called the Fundamentalist Church of Jesus Christ of Latter Day Saints.

A spokesman for Texas’ Child Protective Services said attorneys were reviewing the order. “Any decision regarding an appeal will be made later,” Patrick Crimmins said.

Two FLDS mothers whose children were placed in foster care learned of the decision from reporters on their way to the courthouse in San Angelo, unaware of the 3rd Court ruling or that child custody status hearings that started here this week had been canceled in its wake.

“Hurray. Praise the Lord,” said Sarah Barlow, 45, who has two children in foster care. “We’re grateful for this.”

Ilene Jeffs, 45, who has three children in foster care, said, “We’re grateful for anything that’s positive.”

FLDS spokesman Rod Parker said families not involved in the lawsuit ruled on today will be filing paperwork to ensure they “get the benefits of this ruling.”

Cynthia Martinez, a spokeswoman for Texas Rio Grande Legal Aid, which represented 48 mothers in the custody suit against the state, said, “We’re extremely happy with the ruling.”

Martinez said she wasn’t certain how soon the children might be returned to the 1,700-acre Yearning for Zion Ranch near Eldorado

“The way that the courts have ignored the legal rights of these mothers is ridiculous,” said Texas Rural Legal Aid attorney Julie Balovich, who also represents FLDS mothers. “It was about time a court stood up and said that was has been happening to these families is wrong.”

In the decision, the 3rd Court ruled that CPS failed to provide any evidence that the children were in imminent danger and acted hastily in removing them from their families.

The agency had argued that the children on the ranch near Eldorado were either abused or at risk of abuse. The Texas Family Code allows a judge to consider whether the “household” to which a child would be returned includes a person who has sexually abused another child. Child welfare officials alleged that the polygamist sect’s practice of marrying underage girls to older men places all its children at risk of sexual abuse.

According to the court, “The existence of the FLDS belief system as described by the Department’s witnesses, by itself, does not put children of FLDS parents in physical danger.”

It stated, “Removing children from their homes on an emergency basis before fully litigating the issue of whether the parents should continue to have custody of the children is an extreme measure.”

The state can either ask the Texas Supreme Court to stay the order or comply by returning the children to their parents, said Scott McCown, a former judge and executive director of the Center for Public Policy Priorities.

McCown said the appeals court is not saying the children could not be removed from their families, only that Walther had overstepped her authority by issuing an emergency order. He said protective services could still remove the children after a full trial.

But McCown said there is a very real risk that if the children are returned to their parents they will be moved to another state, Canada or Mexico and be outside the jurisdiction of Texas’ protective custody.

“One of the real dangers is flight, and the court doesn’t address that at all,” McCown said.

Dallas attorney Susan Hays, an ad litem attorney representing a 3-year-old girl, said also said the state’s options were to ask for a stay or comply. She said the stay could be sought either from the 3rd Court or the Texas Supreme Court.

In today’s order, she said, “What they’ve been told to do is start over, and do it right.”

Parker said, “All of the families want to express their thanks to Texas Rural Legal Aid for achieving this wonderful result. They’re ecstatic. They’re looking forward to being reunited with their children.”

1 Response to Texas Rebuked Over Seizure of Mormon Children