The All-Encompassing Argument Over Souls 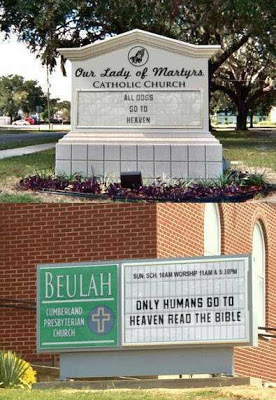 Showdown at Tombstone
By Mariann Wizard / The Rag Blog / October 3, 2008

This is hilarious; a little something on the lighter side — but beyond the laugh, offering some really very freaky insight into the fundamentalist “soul”!! Thanks to Cousin Karen in the country!

Years ago I started buying my Mom a set of collector plates illustrated with Biblical themes; the artwork is cute and humorous, with a wide cast of creatures in addition to whatever human characters were involved. The first one, as I recall, showed Noah’s Ark right after the Flood, as the animals and birds, two by two, head out into a fresh-washed world — next came Moses parting the Red Sea, the Israelites crossing over with all their flocks, herds, dogs, cats, etc. I got all the way through the set until the sixth and final plate was announced, supposed to be “Heaven”, where all the little human angels sat around on clouds and played musical instruments, w/ not a dog or a cat or a bird in sight. I dunno about the Presbyterians, as seen in this sequence of church signboard statements, but Mama was a Methodist, and none of her kids would go to a Heaven without animals. I only bought five plates. 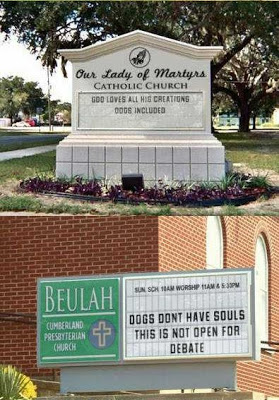 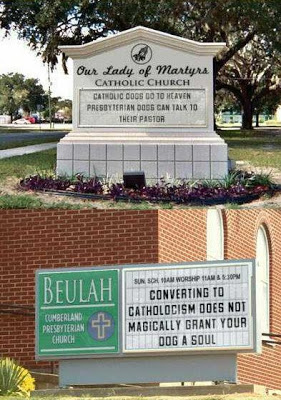 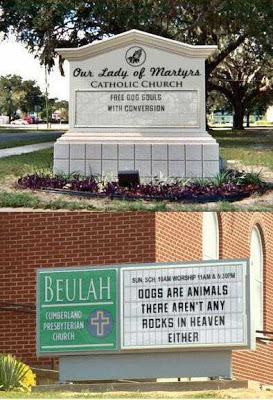 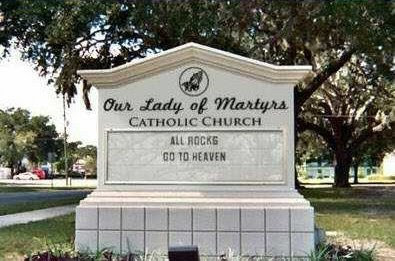 This entry was posted in Rag Bloggers and tagged Existential Angst, Fundamentalism, Humor. Bookmark the permalink.

1 Response to The All-Encompassing Argument Over Souls