The American Left : Do We Have a Progressive Movement Today? 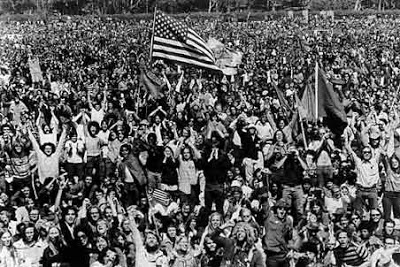 Is there a new progressive movement? If so, it’s different from the last one: sixties anti-war demonstration was part of the New Left movement. Photo courtesy of Robert Altman.
George Bush ‘has succeeded in bringing moderates, liberals, and progressives closer together than at any time in decades’
By Ken Brociner

Even if there are only fleeting moments when many of us can feel – in our bones – that there really is such a thing as “a national progressive movement,” the fact is that those moments are real.

George W. Bush will go down in history as one of this country’s worst presidents ever. But there is at least one thing we can genuinely thank him for: He has succeeded in bringing moderates, liberals, and progressives closer together than at any time in decades. But do the many political connections created since Bush took office actually add up to something that can be called a (or “the”) “progressive movement”?

The short answer is – it depends on who you ask. Over the past five or six years, I have been struck by the wide range of answers to this question within progressive circles. Some progressives believe it is premature to talk about the existence of a singular “progressive movement” – as opposed to the existence of a number of separate but related progressive movements. Some even dismiss the importance of the question to begin with – considering the issue either irrelevant or of secondary importance.

The question of whether or not we constitute “a movement” cuts to the very core of just who “we” are at the present moment. How we answer it is bound to shape the programs and strategies we develop in the months and years ahead.

I recently interviewed a few leading intellectuals and activists to find out whether or not they believe it is accurate to say that today – less than four months before the 2008 election – “a progressive movement” actually exists.

Bill Gamson is the co-director of Boston College’s Media/Movement Research and Action Project — and one of the leading scholars in the field of social movement theory. In an email interview last week this is what he had to say:

“Is there a field of actors – formal organizations and/or networks — who are trying to mobilize people for collective action to challenge and change social, political, and economic inequalities? Of course. Sometimes they work in coalitions and sometimes they work independently. Do they always work together harmoniously with a common strategy? Of course not. But that doesn’t make them less of a progressive movement.”

Offering a strikingly different perspective was Charles Knight, the president of the Commonwealth Institute, an independent, public policy research center in Cambridge, Mass. Knight, who also co-directs the institute’s Progressive Strategies Studies Project, said he sees ” a progressive political tendency,” but not a movement.

“But I would agree that there are movement elements within progressive politics today,” Knight said. “Still, while referring to a ‘progressive movement’ does give people a feeling of being part of something bigger, it’s important that progressives have a sense of our own history, and that we not throw around the term ‘movement’ too loosely.”

I also spoke with Fred Berman, a leading activist/organizer in the Boston area. Berman, one of the leaders of the Progressive Democrats of Somerville (which is affiliated with Democracy for America), spends most of his time working on issues like regional development, affordable housing and government accountability. He told me: “I do feel connected to people and organizations that are working on particular issues on a local, state, or national level. But that feels very different than being part of an overarching national movement.”

Todd Gitlin, a longtime activist and professor of journalism and sociology at Columbia University, has written several important books that discuss progressive movement building, including, most recently, The Bulldozer and the Big Tent. When I asked Gitlin what he thought about the current state of progressivism, he said: “It’s a wish more than an accomplished fact to say that there is a single progressive movement. There are movements, plural, some moving more vigorously than others…. Insofar as there is a single movement, it’s a reaction to the depredations of the Bush years.”

Is there any way to synthesize these different viewpoints? I think there is. For four out of the last six years, I have attended the Take Back America (TBA) conferences, now held every spring in Washington D.C. TBA brings together progressive politicians and leaders, activists, and organizers from the peace, labor, civil rights, economic justice, environmental, women’s, gay rights and netroots movements. But each year – from lecterns, in panel discussions and in the corridors, one hears constant references to “the progressive movement.”

This has never felt like a political line or wishful thinking to me, but rather a perfectly appropriate way of capturing the essence of what is happening right then and there, during three jam-packed days of speeches and discussions. Sure, the 2,000 or so people who attend each year are not reading from the same playbook on a year-round basis. And most people in attendance have individual organizational allegiances of one sort or another. But that feeling of being part of a national “movement” that so many people get from attending the TBA conferences is something quite real. I know I can practically “taste it,” and I doubt I am alone in this.

Other activists find that same feeling of connectivity when they attend mass anti-war demonstrations, the annual Netroots Nation conference, or national meetings of their labor unions – especially when representatives of other movements show up to offer solidarity.

Throughout this decade, progressive groups large and small have significantly increased their connections to each other in all sorts of ways unimaginable just ten years ago. One excellent example of this is the recently formed Health Care for America Now coalition that includes many of the leading unions and progressive organizations in the country, such as ACORN, AFSCME, SEIU, MoveOn, USAction, and The Campaign for America’s Future.

Obviously, the Internet has been a big part of these new connections – but the stolen 2000 election, the war in Iraq and Bush’s many other disastrous policies have also been instrumental in bringing progressives together.

Even if there are only fleeting moments when many of us can feel – in our bones – that there really is such a thing as “a national progressive movement,” the fact is that those moments are real. Which raises this question: How can we hold onto and enhance those feelings of nationwide connectivity?

Clearly, one way is to expand “the movement” (what it was universally called in the ’60s) itself. The idealism and mass participation in the Obama campaign provides us with an enormous opportunity to do just that. We also need to create more effective relationships, links, and coalitions between the various components of the progressive movement.

But equally important is that we expand our collective awareness of the existence of a national movement. To some extent, what this really boils down to is how we think, write, and talk about ourselves. The more frequently we refer to the progressive movement, the more we actually solidify its — and thus our — existence as a nationwide entity.

Back in the 1960s, the lines were more clearly drawn than they are today. Both the counterculture and the New Left (which constantly overlapped) felt as if they were practically at war with “the system.” There was no need to promote a sense of there being “a movement” forty years ago — it was in the very air one breathed. But the situation today is very different: opposition to the war in Iraq hasn’t generated anywhere near the kind of cataclysmic revolt within American society that the war in Vietnam did. And nothing today approximates the ’60s mass rebellion of youth – when millions openly rejected the cultural and social norms of “mainstream America.”

Still, it seems clear that – thanks to the Internet and new connections between progressive organizations – “a movement” has come back into existence since Bush took office.

Perhaps it’s a matter of seeing the proverbial glass as half full. For what is to be gained by insisting it is still half empty? By looking at our movement positively, we not only boost our spirits, but help to foster progressive unity rather than fragmentation. After all, if we are “a movement, ” than we need to act like one.

As the Jefferson Airplane so aptly put it back in 1969, “We can be together… we should be together.”