The Astounding Power of Empty Words 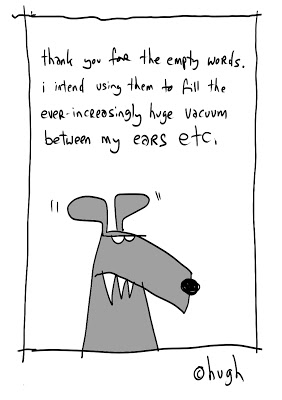 WASHINGTON — When Iraqi Prime Minister Nouri al-Maliki sent his “army” to fight the Mahdi Army in Basra, U.S. President Bush called it “a defining moment.” It turned out instead to be a confirming moment. It confirmed that there is no state in Mesopotamia — the geographical territory known as the nation of Iraq.

One of the most common signs that America’s leadership is clueless about Fourth Generation war is the language they use.

Fourth Generation war has few if any defining moments. Nor does it have “turning points,” another common Bushism. In his testimony to Congress, U.S. Gen. David Petraeus revealed the limits on his own grasp of 4GW when he said, “We’ve got to continue. We have our teeth into the jugular, and we need to keep it (sic) there.”

Opponents in 4GW have no jugular. 4GW is war of the capillaries. What U.S. forces have their teeth into in Iraq is a jellyfish.

If we are to see Iraq and other Fourth Generation conflicts as they are and not through the looking glass, we need to use words more carefully.

Because there is no state in Iraq, there is also no government. Orders given in Baghdad have no meaning, because there are no state institutions to carry them out. The governmental positions of Iraqi leaders have no substance. Their power is a function of their relationship to various militias, not of their offices. Maliki has no militia, which means he is a figurehead.

The Iraqi “army” and “police” are groupings of Shiite militias that exist to fight other militias and take orders from militia leaders, not the government. Government revenues are slush funds militia leaders use to pay their militiamen. All of these phenomena, and many more, are products of the one basic reality: there is no state.

The failure of Maliki’s “big push” into Basra put Iraq’s statelessness on display. Ordered to do something it did not want to do, the Iraqi “army” fell apart, as militias usually fall apart when given unwelcome directives. Iraqi “soldiers” and “police” went over or went home, in considerable numbers. Those who did fight had little fight in them; the affair reportedly ended with the Mahdi Army controlling more of Basra than it did at the beginning. Maliki, desperate for a cease-fire, had to agree in advance to any conditions Moqtada Sadr cared to impose.

American policy proved even more reckless than that of Maliki. To win in Iraq, U.S. policymakers must see a state re-emerge. That means U.S. forces should stay out of the way of anyone with the potential to recreate a state. Sadr is at or near the head of the list. The Maliki “government” isn’t even on it.

So what did the U.S. government do? Why, it went to war against Sadr on behalf of Maliki, of course. The American leadership cannot grasp one of the most basic facts about 4GW, namely that the splintering of factions makes it more difficult to generate a state. Should the United States have the bad luck to “win” this latest fight and destroy the Mahdi Army, it will move not toward but further away from that goal.

In the end, the Bush administration’s — and the Pentagon’s — insistence that the Iraqi state, government, army and police are real blinds only themselves. Iraqis know they are not. The American public knows they are not. Anyone in Africa or Asia probably knows they are not. Do the members of the U.S. Senate committees on Armed Services and Foreign Relations know less that the average inhabitant of Africa or Asia? So the congressional hearings on Iraq suggest, and such is the power of empty words.

This entry was posted in RagBlog and tagged Iraq, Military, U.S. Government. Bookmark the permalink.