The Children of Iraq 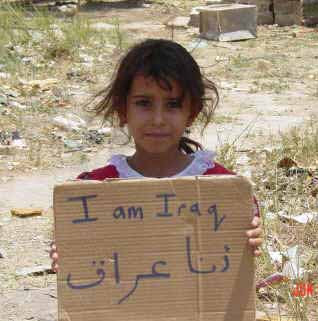 Look if you dare:

Principle I. Any person who commits an act which constitutes a crime under international law is responsible therefore and liable to punishment.

Principle IV. The fact that a person acted pursuant to order of his Government or of a superior does not relieve him from responsibility under international law, provided a moral choice was in fact possible to him.

Principle V. Any person charged with a crime under international law has the right to a fair trial on the facts and law.

Principle VI. The crimes hereinafter set out are punishable as crimes under international law:

(a) Crimes against peace:

(i) Planning, preparation, initiation or waging of a war of aggression or a war in violation of international treaties, agreements or assurances;

(ii) Participation in a common plan or conspiracy for the accomplishment of any of the acts mentioned under (i).

Violations of the laws or customs of war which include, but are not limited to, murder, ill-treatment or deportation of slave-labour or for any other purpose of the civilian population of or in occupied territory, murder or ill-treatment of prisoners of war or persons on the seas, killing of hostages, plunder of public or private property, wanton destruction of cities, towns, or villages, or devastation not justified by military necessity.

Murder, extermination, enslavement, deportation and other inhumane acts done against any civilian population, or persecutions on political, racial, or religious grounds, when such acts are done or such persecutions are carried on in execution of or in connection with any crime against peace or any war crime.