As one commenter to the piece on Common Dreams remarks, “Finally, the CIA is being efficient and back hauling terrorists for rendition on their regular drug flights and all you commie, pinko, liberal, hate America types are complaining!” 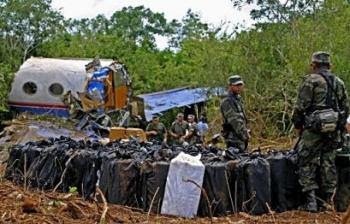 MEXICO CITY – A private jet that crash-landed almost one year ago in eastern Mexico carrying 3.3 tons of cocaine had previously been used for CIA “rendition” flights, a newspaper report said here Thursday, citing documents from the United States and the European Parliament.

The plane was carrying Colombian drugs for the fugitive leader of Mexico’s Sinaloa cartel, Joaquin “Chapo” Guzman, when it crash-landed in the Yucatan peninsula on September 24, El Universal reported.

The daily said it had obtained documents from the United States and the European Parliament which “show that that plane flew several times to Guantanamo, Cuba, presumably to transfer terrorism suspects.”

It said the European Parliament was investigating the private Grumman Gulfstream II, registered by the European Organization for the Safety of Air Navigation, for suspected use in CIA “rendition” flights in which prisoners are covertly transferred to a third country or US-run detention centers.

It also said the US Federal Aviation Administration’s (FAA) logbook registered that the plane had traveled between US territory and the US military base in Guantanamo.

It said the FAA registered its last owner as Clyde O’Connor in Pompano Beach, Florida.

Extraordinary rendition has been harshly criticized since it began in the aftermath of the September 11, 2001 attacks in the United States

This entry was posted in RagBlog and tagged CIA, Drug War, War on Terror. Bookmark the permalink.

1 Response to The CIA: Just Doing Their Appointed Rounds