The Con-Servative Way: Privatize the Profits and Socialize the Losses 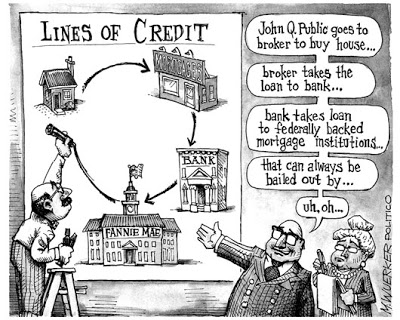 Despite repeated efforts during the past year by the Federal Reserve (Fed), the U.S. Treasury, regulatory agencies, and global central banks, the current financial crisis has not been contained—let alone resolved. In the months since the Bear Stearns investment bank bailout in March 2008, the instability of the U.S. financial system has continued to deteriorate.

This past July, a second major financial instability event occurred—the near collapse of the two quasi-government housing market agencies, Fannie Mae and Freddie Mac. Like Bear Stearns, the collapse of Fannie/Freddie was barely averted by an announcement from Fed Chair Ben Bernanke and U.S. Treasury Secretary Henry Paulson that the government would bail out the two agencies. Unlike Bear Stearns, the bailout requires Congressional action and its estimated cost may be as high as $300 billion, according to independent estimates. That’s nearly ten times the $29 billion bailout cost of Bear Stearns.

Evolution of the Fannie/Freddie Collapse

While banks and mortgage companies reaped super-profits from multi-trillion dollar mortgage lending during 2003-2006, they simultaneously pushed for the full privatization of Fannie/Freddie. They were not able to achieve that, but were able to keep Fannie/Freddie underfunded and freeze the latter’s share of mortgages purchased at no more than 40 percent of the total mortgage market.

But once the subprime mortgage bust began in late 2006, the same banking and mortgage lenders sought to have Fannie/Freddie buy up their bad debt in greater and greater volumes, including their so-called securitized packages of bad subprime mortgages. Fannie/Freddie’s bad debt load quickly accelerated. Its share of the mortgage debt market in turn rose rapidly, from less than 40 percent in 2005 to more than 70 percent. By the first quarter of 2008, more than 80 percent of all mortgages issued were purchased or guaranteed by Fannie/Freddie. 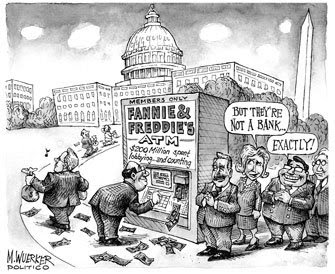 Fannie/Freddie’s debt load rose quickly, but their funding and reserves on hand to cover the debt did not. By summer 2008 the agencies found themselves with more than $5 trillion in liabilities, of which $1.7 trillion was direct debt, with only $81 billion in reserves.

Created in 1938 to rescue homeowners and mortgages from a similar bout of banking speculation gone bust, in 1968 Fannie/Freddie were partly privatized, which means they were no longer purely government agencies, but became corporations in which private investors purchased stock. Their private investors range from other financial institutions, wealthy independent investors, private equity funds, hedge funds, pension funds, and various foreign banks and institutions. Fannie/Freddie’s directly liable debt (called agency debt) of $1.7 trillion (of the total $5.3 trillion) is heavily owned by foreign central banks.

Should Fannie/Freddie collapse, their investors would suffer major financial losses as well as possible defaults and bankruptcies of their own. Foreign central banks would be especially hard hit. That would mean spreading and deepening the financial crisis further, not only in the U.S. but globally.

Investors became concerned that the two agencies could not cover their multi-trillion dollar liabilities with their miniscule liquid funds on hand. With housing prices continuing to fall and foreclosures rising, in early July analysts estimated Fannie/Freddie losses over the coming year of $100 to $300 billion depending on how far housing prices might fall. Investors did what most investors in any company do in such circumstances—they began a wholesale dumping of their Fannie/Freddie stock. The break came on Friday, July 11, as Fannie/Freddie stock prices plummeted by 50 percent.

Amazingly, even though Fannie/Freddie’s reserves had been declining throughout the current financial crisis, particularly in the first half of 2008, instead of taking action, U.S. government regulators repeatedly eased the amount of funds the agencies were required to keep on hand to cover emergencies such as that which occurred in July. From 30 percent at the outset of 2008, regulators reduced required reserves to 20 percent and then to 15 percent, with talk of a further cut to 10 percent in September 2008 on the agenda.

An opportunity to do something about the situation arose in mid-May, in the form of proposed housing assistance legislation for homeowners facing foreclosure. But Congress did nothing. Instead, it accepted promises that Fannie/Freddie would voluntarily raise capital to add to their reserves. Even tepid proposals to change the agencies’ regulators—a kind of rearranging of deck chairs on the Titanic—failed to pass Congress last spring.

In the days leading up to July 11, government regulators, the Fed, and the Treasury repeatedly proclaimed that the two agencies had sufficient capital, were voluntarily raising more, and that no rescue of the agencies was necessary. Of course, Paulson/Bernanke never bothered to explain how companies with such a collapse in stock prices might be able to raise capital and thus avert the crisis. Even before the near collapse, both agencies were jointly able to raise only $20 billion. By the end of the week of July 7-11, Fannie Mae’s stock price was down 76 percent over the previous year, and Freddie’s had fallen 83 percent.

Over the weekend of July 12-13, Paulson/Bernanke and regulators did another about-face. When markets opened on Monday, July 14, they announced a plan to guarantee a government bailout of Fannie/Freddie. The plan required neither the Fed nor the Treasury to directly fund the bailout (neither had sufficient funds, in any event). Instead, Congress would be asked to provide the bailout funding. Until such funds were forthcoming, however, the Fed would provide interim emergency loans to the two agencies. Paulson also proposed the U.S. Treasury buy the two agencies’ public stock, thus propping up their stock prices, if necessary.

The moribund housing bill, which had earlier failed to pass Congress, was quickly resurrected following July 14. The Bush administration also proposed to repopulate the boards of directors of the two agencies with more Wall Street bankers. And Paulson/Bernanke made public assurances that “all necessary lines of credit” would be open to the agencies until Congress provided more substantial and permanent funding. The Congressional bill that eventually passed in late July ultimately provided for a $300 billion line of credit—just about what is projected by analysts as the total losses of the two companies over the next period. The $300 billion is to be disbursed by the Treasury to Fannie/Freddie as needed, either as loans or as government direct purchases of the companies’ stock.

Despite the bailout announcement, a further general fall in the New York stock market and a further crisis in confidence in the banking system and financial institutions followed. The California bank, IndyMac, failed soon after, and stock prices of other regionals like WaMu, National City, and others significantly declined. The Standard & Poor’s 500 bank stock index suffered its worst decline since 1989. Many banks and mortgage lending companies now teeter on the edge of default and bankruptcy.

The Strategic Significance of Fannie/Freddie

The near collapse and proposed bailout of Fannie/Freddie represents several important developments in the current financial crisis. First, it means the current financial crisis has not been stabilized, but has actually gotten worse. According to Bill Gross, manager of PIMCO, the world’s biggest bond fund, falling U.S. home prices will require financial institutions to write off more than $1 trillion in losses. The two to three million projected foreclosures may even be larger, given the estimated 25 million whose homes are now in negative equity (worth less than the purchased price) and the remaining mortgage costs.

It also means that the Fed, is no longer able to deal with the crisis on its own—as it essentially did with Bear Stearns. It has now clearly passed the buck to Congress. How much more will the bailout cost? According to a July Standard & Poor’s estimate, the cost would run somewhere between $420 billion and $1.1 trillion. That compares to the last housing market bailout that occurred in the late 1980s with the Savings & Loan debacle of around $250 billion.

To date the Fed has committed more than $400 billion of its roughly $800 billion to bail out Bear Stearns and prevent the collapse of other banks in the U.S. and abroad. In July it extended prior deadlines to provide special funding to banks and financial institutions still in trouble into 2009 and it will no doubt have to extend that guarantee as the crisis deepens.

The Fed has also lowered interest rates as far as it believes it can—to 2 percent. Its policy of engineering short term interest rate reductions has clearly failed. Lowering rates has not generated a recovery in the real economy or even assisted bank lending much. Banks continue to be reluctant to lend to each other, let alone to other non bank businesses or homeowners. All that lower Fed interest rates have accomplished is to fuel the devaluation of the dollar, feed currency speculators preying upon that devaluation, raise all types of commodity prices in the U.S., and in effect export part of the U.S. slowdown to other economies.

This shifting of the burden for bailing out the financial system to the U.S. Treasury and Congress signals an important shift in capitalist financial strategies for dealing with the crisis. It means monetary (Fed) solutions to the financial crisis have been effectively put on hold. Fannie/Freddie thus represents the shift into the second phase of financial crisis, while Bear Stearns represented the end of the first phase of the crisis.

They also represent a strategic crossroads. It is clear the Fannie/Freddie bailout is inevitable so long as housing prices continue to drop, which they will, foreclosures continue to rise, and housing market losses continue to grow. It remains to be seen how successful a proposed future bailout by Congress and the Treasury will be in stabilizing the two agencies. Should Fannie/Freddie fail to raise at least another $100 billion in capital or should their stock prices continue to decline, the two agencies might be forced to sell assets at fire sale prices. This very same development began occurring at the end of July among investment and commercial banks also unable to raise capital to cover losses. The hybrid giant bank, Merrill Lynch, began fire sales of its assets at the end of the month, dumping $31 billion in bad loans and mortgages for only $7 billion—a move almost certain to be copied by other banks. Fannie/Freddie might not be able to avoid similar action.

Fannie/Freddie also marked the entry of the New York stock markets into clear bear territory. Stock prices have now crossed a threshold. Despite occasional recoveries, they will proceed to decline further. In even typical postwar recessions, stock prices have fallen 30-40 percent. The current recession is anything but normal, so stock prices can be expected to fall at least as far.

Perhaps one of the more important strategic representations of Fannie/Freddie, and one of the least understood, are their tie-ins to the global derivatives markets. There are three critical numbers associated with Fannie/Freddie. First is their total liability of more than $5.3 trillion in mortgage debt. Second is their combined direct so-called agency debt of $1.7 trillion (which is part of that $5.3 trillion total). Third is the more than $2 trillion in derivatives they own, which were taken on to hedge their risks in their mortgage portfolio. The derivatives positions connect them to countless (and mostly unknown) global financial institutions. Were Fannie/Freddie to default or go bankrupt on their direct agency debt, the global impact via the derivatives market would be enormous. The magnitude of the current financial crisis would grow several-fold.

This entry was posted in RagBlog and tagged Bank Bailouts, Banking, Economy, Housing. Bookmark the permalink.