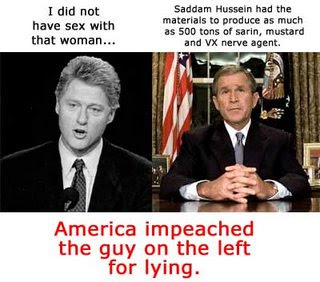 And to remind you of the liars that still reside in Washington, DC, with impunity, here is a link to the White House Web site titled Disarm Saddam Hussein.

9th of April – The Fall of America
By Layla Anwar

At the gates of Babylon the Great, you are still struggling, fighting away, chasing this or the other, detaining, bombing from above, filling up morgues, hospitals, graveyards and embassies and borders with queues for exit visas.

And don’t give me that shit about your democratic process and elections. You brought the whores from Iran to rule on your behalf and pimp for their Persian motherland.

You are small players in a game that still eludes you…the Iraqi Game is far greater and bigger than all of your strategies. You have lost in Iraq, you have been totally defeated – Politically, psychologically and economically…

Your tanks, your weapons, your artillery, your jets are nothing for us, for we are RESILIENCE and we are RESISTANCE.

You keep hiding in your camps and your Green Zone with the few Iraqi prostitutes who are willing to work for you. They don’t represent us. They represent your brothel. And their days are numbered…just like yours.

Over 600’000 armed men; soldiers, mercenaries, contractors, intelligence, security, spies add to them the sectarian death militias that you and Iran have armed (Sadr, Dawa, Badr and others), add the Mossad, the Peshermgas of the dirty Zionist Kurds, add the ghettoes you built and where you segregated us, add the millions dead and exiled and maimed…And you still CAN’T CONTROL IRAQ.

Read all of it here. Arab Woman Blues / The Rag Blog 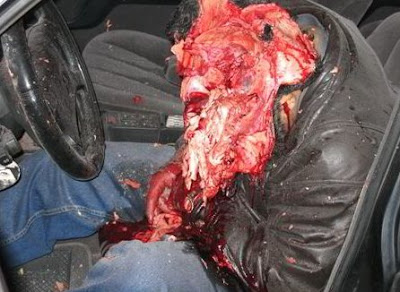 Beheaded by US gunfire