The Demand Crisis and the Wall Street Pirates. Aaaargh! 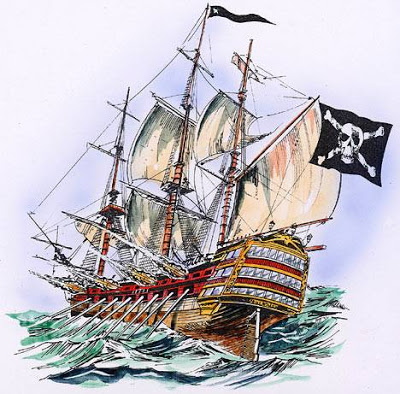 We could demand that all the pirate trunks of ‘toxic assets’ be loaded onto flatbed trucks and driven back to California where they belong. Overnight, California would need no more IOU’s.

They tell us we’re experiencing a crisis of demand, but they have a backward idea of it.

To turn the picture right side up, we begin with the biggest lesson from the financial sucker punch hitting workers of the world this year — human value comes from having real work to do.

Today’s value crisis hits hardest where profits — and this is why they are called earnings — are failing to produce new tools. This is the demand crisis. Our demand that leaders take better care of the people’s tools has not been heard.

Of course, as the great London philosopher sez in Capital Volume One, tools are contradictory things. The better tools get, the fewer workers needed per unit. Hence the labor-management contradiction. Hence the iron law of social revolution. Dearborn, then and now. Once you start making better tools you can’t help but create — what shall we call it? Change?

And the big problem with change is that people try to go around or over or under or WITHOUT the progressive re-production of tools. No new tools, no real change.

Capitalism is of course the holy system which speaks the language of the Gospel and promises to keep tool making dynamic and efficient so that value flies up from work. And it does have a metaphysical charm owing to our impression that profit and tools derive from some conjoined living form.

The great San Francisco economist Henry George said interest payments are legitimate social demands because the wealth we put back into tools needs to grow like anything else. Of course any living thing can demand disgusting amounts of fodder and grow to obscene proportions on that basis, but it should not use the words of Henry George as an excuse for that.

Now, if we are consistent in our terminology here, we could say that anyone who kills the living conjunction between earnings and tools can be considered anti-capital. But if we were consistent in just this way, we would demand triple damages from Wall Street for a trillion or more anti-capital crimes.

Instead of consistent terminology, however, what we are getting fed these days is nonsense soup. For example, in my home there is an electric soap box where people sit for hours yammering about how outraged they are at outsized cash payments going to workers at institutions who once made a contest of stashing wages and profits into silos that nobody can find.

Today there is some question about how to value “toxic assets” that derive from predatory debt. But there’s a simple way to value the cost of such piracy. How much would it cost to give every penny back?

We can solve this demand crisis in at least two ways. First, we could demand that all the pirate trunks of “toxic assets” be loaded onto flatbed trucks and driven back to California where they belong. Overnight, California would need no more IOUs.

Or second — because to be honest about it we secretly admire pirates and sometimes find ourselves dreaming that we could join them — we can demand that all these big-bonus banking houses show us how they are putting their talents to work funding the next generation of tools that we have been needing as a nation since about this time last year.

We demand that they assist California, too.

5 Responses to The Demand Crisis and the Wall Street Pirates. Aaaargh!