The ‘Double Consciousness’ of Race 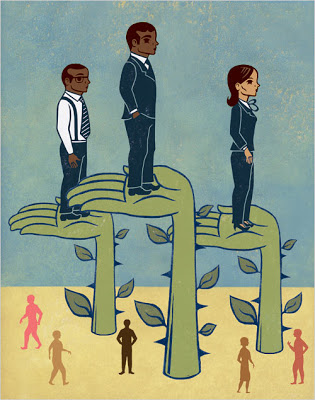 WASHINGTON — They are the children of 1969 — the year that America’s most prestigious universities began aggressively recruiting blacks and Latinos to their nearly all-white campuses.

No longer would Harvard, Yale, Princeton and Columbia be the domain of the privileged. Instead, in response to the national soul-searching prompted by the civil rights movement, America’s premier colleges would try to become more representative of the population as a whole.

Forty years later, America is being led, to a striking extent, by a new elite, a cohort of the best and the brightest whose advancement was formed, at least in part, by affirmative action policies. From Barack and Michelle Obama (Columbia, Princeton, Harvard) to Eric Holder (Columbia) to Sonia Sotomayor (Princeton, Yale) to Valerie Jarrett (Michigan, Stanford), the country is now seeing, in full flower, the fruition of this wooing of minorities to institutions that for much of the nation’s history have groomed America’s leaders.

And yet the consequences of that change remain unresolved, as became clear on Friday, when Mr. Obama grappled a second time with the arrest of the Harvard Professor Henry Louis Gates Jr. in his own home.

The incident, the president said, offered the potential to soothe longstanding distrust between minorities and police officers. But it also laid bare another reality, that the children of 1969, even those who now occupy niches at the top of society, regard their status as complicated, ambiguous and vulnerable.

“Whether I were black or white, I think that me commenting on this and hopefully contributing to constructive — as opposed to negative — understandings about the issue, is part of my portfolio,” Mr. Obama said.

It was a reminder that Mr. Obama, in addition to being the most powerful American, is also the fulfillment of the ideals embraced by Ivy League minority recruiters in 1969. Mr. Gates entered Yale that year, as one of 96 black freshmen. Today that number seems small. But there had been only six black students just three years before. 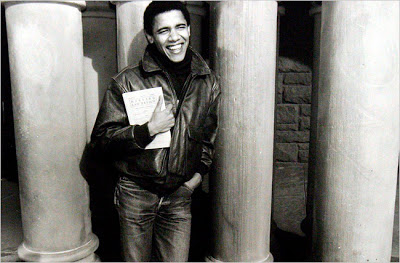 Mr. Gates belonged to the first affirmative action wave at top universities — a wave that continued into the 1970s and the 1980s. I was one of its beneficiaries. A black 17-year-old from Monrovia, Liberia, I was one of some 200 black freshmen at the University of North Carolina at Chapel Hill in 1983.

My first roommate was a white student from Seagrove, N.C., whose SAT scores and grade-point average were higher than mine. Privately, I consoled myself that I had qualifications that she didn’t: I could name the capital of every country in Africa; countries she had never heard of. I knew where the Zambezi River emptied into the Indian Ocean. None of that had been on the SAT.

But every now and then I feared I was faking it, that my white classmates had something I didn’t. There were things they seemed to know instinctively, that I had to look up. I remember getting laughed at during a game of Pictionary when I couldn’t come up with the word for a giant bird landing on a lawn with a baby in its mouth.

My feelings of inadequacy were not unusual, said David L. Evans, the Saturn/Apollo electrical engineer hired by Harvard in 1969 to help lead its affirmative action program. When Mr. Evans visited public high schools in Arkansas in search of promising black students, he was met with skepticism. “Even people who didn’t have any mean-spiritedness would say to the students, ‘You going to be up there with the Kennedys?’ ” he recalled. “ ‘How do you think you can make it there?’ ”

There was anxiety, too, among the originators of race-based affirmative action programs. “The idealistic version of why these universities embraced racial affirmative action is that they said, ‘Hey, we’re in the business of training elites, it would be better for America if there were a diverse elite,’ ” said Nicholas Lemann, dean of Columbia University’s Graduate School of Journalism and author of “The Big Test,” a history of the SAT and the rise of America’s meritocracy. To its architects, the minority recruitment was the next phase for universities that for years had paved the way for whites, particularly the offspring of upper-class alumni, Mr. Lemann said.

“The cynical version of why they did this is they said, ‘We can’t control this country, it’s becoming too diverse, we need to socialize the brighter minorities and make them more like us.’ ”

In many ways, being molded into people “more like us” gave the children of 1969 an advantage denied most of their white counterparts. They learned to navigate within a second world. They also absorbed some of its ideas and values. And they paved the way for the next generation.

“We had to go through this phase of larger integration for Barack Obama to be possible,” Mr. Gates said in an interview a few days after his arrest. “It would have been impossible for Barack Obama to go from a historic black school to become president, at this time. The whole point is that a broad swath of America had to be able to identify with him.”

It also enabled Mr. Obama to run “the most race-blind campaign” of any black presidential candidate, said Gwen Ifill, the PBS news reporter whose book “The Breakthrough: Politics and Race in the Age of Obama” examines the rise of African-Americans in politics.

Perhaps. But the children of 1969 dwell in a complex world. They retain an ethnic identity that includes its own complement of cultural, historical and psychological issues and considerations. This emerged at Judge Sotomayor’s confirmation hearings. And it emerged again last week, when Mr. Obama joked in the White House East Room that if he ran afoul of the police, “I’d get shot.” In saying this, he seemed to draw on the fears of black men across the United States, including those within the new power elite.

It’s the same double consciousness I acquired at U.N.C., though I didn’t think about it that way as a student. Sure, my white friends were learning a little more about black (and African) culture from me. But I was absorbing much more from them, since they surrounded me in such great number. At the time it seemed I had the advantage; I would leave college having gotten much more from my interactions with my white friends than they could possibly have gotten from me. And the principal thing I learned was how to make them feel at ease around me.

Except, of course, on those occasions when one can’t. Life outside the university doesn’t duplicate the conditions of university life.

“I can’t wear my Harvard gown everywhere I go,” Professor Gates said. “We — all of us in the crossover generation — have multiple identities, and being black trumps all of those other identities.”

On Friday Mr. Obama said he hoped Mr. Gates’s incident might become a “teachable moment.” It is a daunting task for the children of 1969: finding out whether the double consciousness they honed in the Ivy League can actually get this country to listen — and react — to race in a different way.

[Helene Cooper, a White House correspondent for The Times, is the author of “The House at Sugar Beach: In Search of a Lost African Childhood.”]

This entry was posted in RagBlog and tagged American Society, Education, Race. Bookmark the permalink.

2 Responses to The ‘Double Consciousness’ of Race