The Duty to Stand Up and Fight Against Tyranny 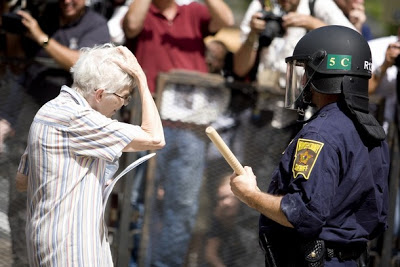 Among the wars currently being fought by the American government is one in which there can be no winners. Our prior law enforcement experiences warn us that the “war on terrorism” has spawned an internal “war on dissent” in which everyone loses.

Author William John Cox’s law enforcement career spanned 40 years, the early part of which was spent as a Los Angeles police officer and which included direct policing of both the riots and terrorist incidents in that city in the late 60’s to early 70’s. One of the first assignments given to author Coleen Rowley as a new FBI agent was to help in the processing and releasing of the numerous files improperly gathered by J. Edgar Hoover after the National Lawyer’s Guild won its FOIA lawsuits against the FBI in the early 1980’s.

The Church Committee unearthed evidence in 1976 that the Viet Nam War had provided cover for the domestic infiltration and wiretapping of civil rights and anti-war groups and resulted in legislation and regulations against the worst abuses. However, the history of government repression and spying on those who dissent against its policies and practices seems to be repeating itself.

Following 9-11, the Bush Administration erased or circumvented many of these hard-won legal restraints. Warrantless searches under the PATRIOT Act and illegal electronic surveillance swept up more than terrorist threats as the government increasingly confused dissent, which builds up a free and democratic society, with terrorism, which seeks to tear it down.

The law enforcement response has become increasingly harsh and heavy-handed since the anti-globalization protests in 1999 in Seattle against the World Trade Organization. In November 2003, as many as 40 different law enforcement agencies invaded Miami during meetings relating to the Free Trade Area of the Americas. Protest groups were infiltrated by the police, the corporate media was “embedded” with law enforcement, and the independent media was suppressed.

The New York City police department used “Miami” tactics in 2004 at the Republican National Convention (RNC) during which hundreds of peaceful demonstrators and innocent bystanders were illegally arrested, fingerprinted, photographed, and subjected to prolonged detention in wire cages before being released without prosecution. Repressive tactics were also used the same year as a counter-terrorism measure at the Democratic National Convention, where Boston police established a designated fenced enclosure topped by razor wire as the “free speech zone.”

Despite this recent history, the militarized crackdown and persecution of protest at the RNC in September took many by surprise especially in an otherwise progressive city like St. Paul (which pioneered the concept of “community policing”). It was a terrible shock to see the riot-clad Robo-cops lined up two and three rows deep, helmet visors down, their police identification gone or not visible, and their tasers and chemical weapon guns pointed at the various members of the Twin Cities Peacemakers and other social justice groups who marched on the first day of the RNC.

More than 800 citizens were arrested (including 40 journalists, one of whom was “Democracy Now!” radio host Amy Goodman) and hundreds of peaceful protesters were pepper sprayed, tasered, or otherwise brutalized.

Thousands more who conscientiously wished to demonstrate opposition to government policies and the illegal war, were too scared to leave their homes. Not only were they intimidated from marching, but they were prevented from participating in other totally peaceful artistic and music events scheduled in the Twin Cities during the week of the RNC.

More evidence for historians that the “war on terror” has morphed into a “war on dissent” can be found in the recently leaked reports establishing that both the Pentagon’s Northern Command (NORTHCOM) and the National Geospatial-Intelligence Agency participated in planning RNC convention security and were possibly involved in crowd control strategies.

At the very least, the intimidating presence of armor-clad police officers at political demonstrations is a visible manifestation of the fascist threat. More pernicious would be any unwarranted, secret collection of information on the various social justice, peace, independent media, musical performance, artistic and legal groups in the lead-up to the RNC. We are currently in the process of determining, through freedom of information type requests, if this in fact, occurred here.

Recent revelations of how the Maryland State Police infiltrated nonviolent groups and falsely labeled dozens of pacifists, environmentalists and Catholic Nuns as terrorists highlights the risks of using undercover law enforcement officers and paid informants to spy on domestic groups. Pressure to produce arrests and convictions justifying the expenditure of hundreds of thousands of dollars in precious tax revenues can result in the elevation of rhetoric into threats and dissent into terrorism.

The mind-numbing repetition of the term “anarchists” in recent newspaper coverage of the $300,000, year-long infiltration of protest groups prior to the convention fails to obscure the great lengths to which law enforcement officials went to prevent “street blockades” and other disruptions in St. Paul. Before the RNC even started, authorities executed pre-emptive raids and “preventive detentions”—controversial concepts originally concocted for the “war on terror” that have no place in our Constitution’s criminal justice system.

Thanks to Minnesota’s version of the PATRIOT Act, the local “war on dissent” has elevated boastful threats to “swarm” the Republican convention and to “shut it down” into charges of conspiracy to riot “in furtherance of terrorism.” However, there is no evidence that any of the so-charged “RNC Eight” ever personally committed acts of violence or damaged property. If they were really ready to “destroy” the City of Saint Paul as alleged, why did they operate so openly? Why was their rhetoric, albeit taunting, for the entire world to see on their website?

Real terrorists are usually much more secretive. Think back to the most significant recent cases of actual domestic terrorism in the United States: Oklahoma Federal Building bomber Timothy McVeigh; Olympic Park and abortion clinic bomber Eric Robert Rudolph; Unabomber (for 18 years) Ted Kaczynski; Ft. Detrick military scientist-anthrax killer Bruce Ivins; and the DC sniper terrorist duo. Most of these and other American terrorists operated alone or with one main accomplice. That’s because secrecy is critical to the success of an actual terrorist act. That means, also, that it’s different from protest and even civil disobedience where mass numbers of participants (instead of secrecy) is the key.

The prosecution of the RNC eight flies in the face of what Nobel Peace Prize winner Al Gore recently urged (to heavy applause)—for young people to engage in “civil disobedience” (he was talking about stopping the construction of coal plants). And only a few days ago, Thomas Friedman bemoaned in his New York Times column (with respect to the national economy) that “Our kids should be so much more radical than they are today.” (Emphasis added).

Dr. David Harris, a leader of one of the peace marches at the RNC as well as someone who has engaged in civil disobedience, assessed it as follows (in his comment on the Petition to Defend the RNC 8):

Nonviolent civil disobedience is the logical action for peace loving people who have tried in every way to work within the legal system only to find that those in power refuse to listen to the voices of the oppressed. I do not agree with destruction of other people’s property as a means of expressing opinion, but direct violence against living creatures is a far greater offense. In the case of the RNC protests, by far the greatest perpetrators of violence were law enforcement officials.

No one could have analyzed this paradox more astutely than Supreme Court Justice Louis Brandeis when he observed:

In a government of law, the existence of the government will be imperiled if it fails to observe the law scrupulously. Our government is the potent, the omnipresent teacher. For good or for ill, it teaches the whole people by example. Crime is contagious. If the government becomes a lawbreaker, it breeds contempt for the law; it invites every man to become a law unto himself; it invites anarchy.

It is very difficult to believe that anyone in this country—police or citizen—wants to again see the government unleash the over-reactive, repressive and violent tactics of the 1960s to squelch domestic dissent. Ironically that would be the real recipe for inviting anarchy.

Irrespective of our political views, all of us must be concerned about the current prosecution of young people, who sincerely oppose an illegal war being fought by an unrepresentative government and who believe it’s better to have no government at all rather than one that commits international war crimes. They stand accused of being terrorists because they naively call themselves “anarchists.” In a free society, we all have the duty to stand up and fight against tyranny, and to speak out in defense of others who do.

[Coleen Rowley is a former legal counsel at the FBI Minneapolis field office. She earned national recognition for helping expose some of the pre 9-11 intelligence failures.

William John Cox is a retired supervising prosecutor for the State Bar of California. As a police officer he wrote the Policy Manual of the Los Angeles Police Department and the Role of the Police in America for the National Advisory Commission on Criminal Justice Standards and Goals.]

This entry was posted in RagBlog and tagged Police Action, Political Protest, War on Terror. Bookmark the permalink.