The Dynamics of a Deflationary Spiral 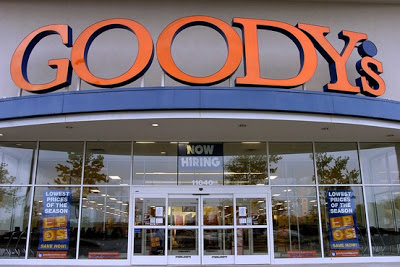 Goody’s Family Clothing appears to be the first retail casualty of a tough holiday season. Above, a store in Knoxville, Tenn., in 2005 during better times. Photo by AP.

One problem in engineering an eventual recovery is that so much of US trade is global, whereas the US is not very competitive in the basic potential recovery strengths like manufacturing, raw materials, or labor costs, while its population is meanwhile relatively old.

This piece below allows you to see the dynamics of a deflationary spiral. Just think of the impact if 10-20% of the retailing jobs disappeared and all of the unemployed clerks cut back on their own shopping. That would be about 1.5-3 million out of work in an industry that already has a lot of retail space by comparison with other countries. Total US employment is about 138 million out of a total population of 300 million. About 2/3 of the total US economy is consumer spending.

From Retail Industry Information on About.com.

As Keynes noted, there is no inherent factor within capitalism operating so that employment comes to rest at a high level; it can come to rest in a permanently depressed state so that it is seen as a task of government to try to re-stimulate the economy above a depressed state until things turn around. But right now, it appears to be collapsing into a state of greater efficiency whereby people only buy what they actually need. This non-discretionary spending centers around food and energy, and not what the shopping malls typically sell, like jewelry and frills.

One problem in engineering an eventual recovery is that so much of US trade is global, whereas the US is not very competitive in the basic potential recovery strengths like manufacturing, raw materials, or labor costs, while its population is meanwhile relatively old. What kind of a restructured trade bargain can a debtor nation like the US strike with other countries that would prevent the dollar from being devalued?

From the Wall Street Journal:

Analysts estimate that from about 10% to 26% of all retailers are in financial distress and in danger of filing for Chapter 11. AlixPartners LLP, a Michigan-based turnaround consulting firm, estimates that 25.8% of 182 large retailers it tracks are at significant risk of filing for bankruptcy or facing financial distress in 2009 or 2010. In the previous two years, the firm had estimated 4-7% of retailers then tracked were at a high risk for filing.Retailers are particularly vulnerable to a recession because of their high fixed costs….

Store Closings: The International Council of Shopping Centers estimates that 148,000 stores will close in 2008, the most since 2001, and it predicts that there will be an additional 73,000 closures in the first half of 2009.

1 Response to The Dynamics of a Deflationary Spiral