The Fiftieth Anniverary of the Cuban Revolution 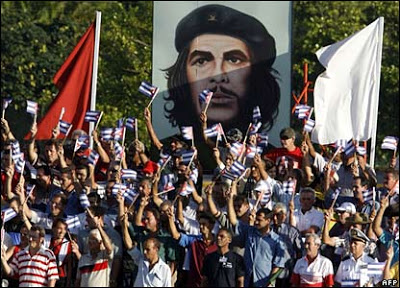 Modesty was the tone of Cuba´s celebration of its first half-century of official revolution.

Prior to the devastating hurricanes last fall, the government had planned a major celebration with visiting foreign presidents and military parades. Because of this natural setback and other economic setbacks—the global economic crisis which has reduced the price of export resources such as nickel and sugar and the number of tourists—the government toned down its plans limiting its celebration to meet austere realities. No foreign leaders were present.

The national act was held in Cespedes Park, in Santiago de Cuba, where Fidel spoke on January 1, 1959 after taking over the city. The area is small and seats only 3000 people. Almost all the invited guests were Cubans. The streets around the park were nearly deserted with the exception of a few civilian block guards and security personnel. There were no cheering crowds.

In the rest of Cuba, celebrations were limited to outdoor musical shows.

The act in Santiago de Cuba was covered by about 120-150 foreign journalists transported by aircraft to the city and then in four buses from the airport. I did not see any organized international solidarity brigades or delegations as previously expected.

A documentary was shown on a dozen outdoor screens during the first hour of the one hour and forty-five minute act. There were two dances, a few songs and poems honoring martyrs of the revolutionary struggle. Then President Raul Castro spoke for half-an-hour. He was briefly interrupted six times by modest applauses.

This is a brief summary of the essence of his speech, and not necessarily transcribed in sequence.

“We have transformed dreams into realities…Our revolution is a permanent struggle, which continues today and will for the next 50 years… Today the revolution is stronger than ever.” 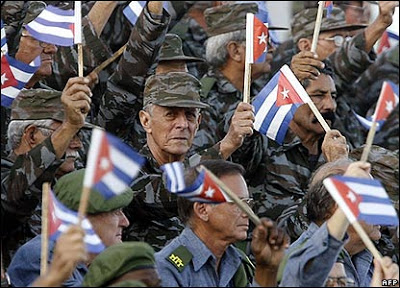 Veterans of the Cuban revolution out in force.

In regards the last citation, Raul referred immediately afterwards to the famous speech that Fidel made to students on November 17, 2005. Fidel said, in essence, that the enemy cannot destroy the revolution but that Cubans can—because of lack of revolutionary morality and poor production—and it would be their fault.

This seems, to my way of thinking, to be a contradiction to the thought expressed that the revolution is stronger than ever. Some delegates told me afterwards that they thought Raul was right because Cuba always lands on its feet and resists the worst of what the enemy launches at them. However, many Cubans are fleeing the land in order to improve their economic possibilities and many Cubans with whom I have worked during the eight years I lived here do not share these delegates opinion. The double economy is a divisive factor yet Raul chose not to delve into this theme.

The only time in which Raul spoke of internal problems was in reference to persons who chose not to work but to hustle as parasites, seeking the easy life. He quickly mentioned that criticism was useful but warned against division, which leads to defeat.

Raul sketched the history of US subversion, direct and indirect, violent and economic against Cuba during the entire history. The US, and its Cuban exile terrorists, have murdered 3,478 Cubans and handicapped 2099. “Liberty has a high price,” Raul concluded.

In three occasions, Raul referred to Fidel and his historic role. These were the points of greatest applause.

For a veteran following the Cuban revolution for half-a-century, I was disappointed at the austerity of its official celebration.

This entry was posted in Rag Bloggers and tagged Cuba, Cuban Revolution. Bookmark the permalink.