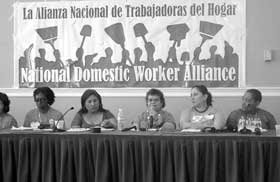 When I had a mild stroke two years ago, some assistance was needed at home to clean, prepare dinner, and help me with my exercises. I called a Bay Area organization, Mujeres Unidas y Activas (MUA, United and Active Women) and someone from their program Manos Cariñosos (Caring Hands) was there the next day. Let’s call her Lorelia.

Lorelia is a Mexicana without documents. She has one son who was born in the U.S., and an older son born in Mexico. She works hard for her rights by carefully paying her income tax and doing other tasks with legal help. She is persistent, a good cook (even of broccoli), and laughs at my jokes. Above all, she believes in MUA. When MUA went to New York to fight for the rights of domestic workers, Lorelia was there.

Employed mostly in private homes, domestic workers experience levels of exploitation and physical abuse rarely seen elsewhere. Mostly women and of color, they face those conditions without the protection of collective bargaining or other union tactics. As nannies, caregivers for the elderly, and housekeepers, they have remained almost invisible, their lives often akin to modern-day slavery. An estimated 1.5 million (U.S. Census Bureau) face these conditions.

Four days in June 2008 marked an unforgettable challenge to those conditions: the first National Domestic Workers Congress, held in New York City. Over 100 workers representing 17 organizations from 11 cities shared stories of abuse and struggle in various meetings and workshops. The women spoke 6 different languages and had emigrated from more than 15 different countries—primarily Mexico, Central and South America, the Caribbean, the Philippines, and India.

Staggeringly difficult to organize? It must have seemed so, at first, in the face of such a splintered workforce with no legal protection. To work a 14-hour day for less than minimum wage and be slapped or thrown against a wall for not wanting to work another 2 hours—as more than a few women recounted. No benefits and very low wages. They are hardly ever allowed to go out and if they do, someone is always “vigilando” (watching).

Domestic workers had first come together in numbers across the U.S at the 2007 U.S. Social Forum in Atlanta, forming the National Domestic Workers Alliance. It included Domestic Workers United in New York, Casa de Maryland, Damayan in Washington state, Filipino Workers Center and CHIRLA from Los Angeles, Mujeres Unidas y Activas (MUA), POWER (People Organizing to Win Employment Rights), the Women’s Collective of the Day Labor Program at La Raza Centro Legal, and others in the Bay Area. Its goal: to build power as a workforce nationally. A work plan was adopted and a committee selected.

The June Congress demonstrated a new strength. Ai-jen Poo described the gathering: “It was great to have workers from new places­—Houston, Miami, San Antonio, Seattle, Denver. Some groups were just getting started. The first day was a lot of learning from each other and two tracks of political education: one on history, including slavery, and the second on gender and sexuality. The next day in a plenary we discussed different types of domestic worker organizing around the U.S. and then met with allies who want to organize around basic issues like war, global warming, the elections—it was important to connect our issues with larger issues.

“We had a march with 500 people to press for passage of the New York Domestic Workers Bill of Rights. In November 2008 a Democratic majority was elected to Congress in New York for the first time in 40 years, which changed the landscape of the campaign, observers said, and hopefully promised change in that state. This summer, workers from Casa Maryland scored an important victory in Montgomery County with the passage of the Household Workers Bill of Rights. It requires written contracts that spell out wages and benefits for nannies, housekeepers, and cooks working at least 20 hours a week, standards for living quarters for live-in employees, and fines for employers who violate the law.”

Maria, an older Mexican woman I interviewed, added a comment about the significance of that victory. “Because Casa Maryland is near Washington, DC, they have dealt with many women who work for diplomats in their homes. These women can be terribly abused, locked up like slaves. The diplomats have special legal status, outside the law—no one will investigate these cases.”

Other problems may also arise from legal barriers. Maria told the story of a worker who obtained an attorney from the Alliance’s legal “Centro,” but the local court refused to hear the case. “The woman worked in a two-story mansion with a huge amount of cleaning to do for so little money and under such bad conditions. The lawyers for her employer said she ‘was exaggerating,’ her work was not so hard, not so much.” Her lawyer wanted to videotape the inside of the house to show more clearly how much she had to do and how hard it was. The employer’s lawyers fought to prevent this, but finally the judge ruled that the video could be made. This was an important victory because “getting heard in court is a very long process,” Maria concluded.

With the Obama administration, there will be a new Secretary of Labor and the National Alliance hopes it may get some positive changes made. Ai-jen Poo explained, “We plan to work with international allies to help shape the first International Labor Organization convention on domestic workers in 2010. That still needs to be discussed with members.

“We hope to strengthen diversity of language and culture. It is still a challenge when people walk into a space and have to put on a translation headset to participate. But there was a lot of respect for people’s languages ….. At the Congreso, there were at least five languages spoken—probably more.”

“There was a lot of translation,” added Emma, a young woman from El Salvador. “Of course, when we can all talk together in the same language, there is a special warm feeling and it is easier to band together. During the breaks when we had a little snack or coffee together, it was very warm. We could be together like sisters, we could laugh and hug together.”

“But we are all fighting for the same thing. No importa la idioma/the language doesn’t matter. We have the same problems,” said Maria. The goal of the Congress was to communicate, to figure out how to continue building the broadest possible unity and what are the next steps.

“One of the most exciting pieces of all this,” Ai-jen continued, “is the idea that we can create a whole layer of working women of color that goes back to slavery and the exclusion of farmworkers. We are part of the labor movement, of the women’s movement, of the immigrant rights movement. We can be a bridge across those different sectors and strengthen them. And especially, we can revive the labor movement.”

Filipina Georgia Danani, who has 17 grandchildren, is owed $22,000 in back wages and is still fighting for her rights. She said, “We are different from most of the collective, who are cleaners. We are caregivers and focus more on the nature of our work. But we are all so marginalized and it’s important to form a collective voice to advocate for change…. We are planning more meetings and will have a Congress every other year. It is a good feeling to be all women, all mothers, all people of color, all oppressed, suffering isolation and loneliness. We are working for respect, we know we are not alone.”

Back in San Francisco, telling me about the Congress, Lorelia sounded proud beneath her Mexican-style working-class modesty. She summed it all up with two words: “buen trabajo” (“good job”). That’s all. And a little smile.

[Elizabeth (Betita) Martínez is a longtime activist, teacher, and writer whose most recent book is 500 Years of Chicana Women’s History (bilingual). With thanks to Andrea Cristina Mercado at MUA for her help with this article.]

This entry was posted in RagBlog and tagged Capitalism, Immigration, Labor. Bookmark the permalink.