The "Forgotten War" Won’t Be For Long 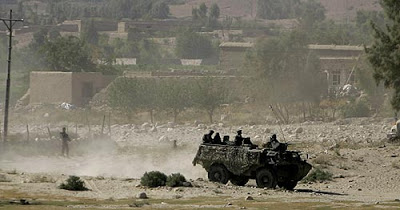 Militants’ new reach and power are demonstrated in attacks on U.S. and French troops.

KABUL, Afghanistan — In the worst loss of life for Western troops in ground combat with Taliban forces in Afghanistan, insurgents ambushed and killed 10 French soldiers and wounded 21 in a sustained assault outside the capital, military officials said Tuesday.

Separately, militants made an hours-long attempt to overrun a major U.S. base in southeastern Afghanistan, employing an unnerving new tactic: multiple suicide bombers, three of whom blew themselves up in succession and three others who were shot by the base’s defenders, according to a military official.

Taken together, the attacks against the French and American forces were a graphic demonstration of the growing reach and power of the Taliban and other Islamic militants in Afghanistan, where this year is fast becoming the most lethal for combatants and civilians alike since the fall of the Taliban to U.S.-led forces in 2001.

The pattern of militant strikes against Western troops over the course of the summer “fighting season” points to increased capacity and bolder ambition on the part of the insurgents, at a time when Afghanistan’s central government, led by President Hamid Karzai, is facing a rising tide of popular discontent.

The attack on the French forces, in a rugged mountainous area about 30 miles east of Kabul, also heightened the sense of insecurity close to the capital. Last week, three Western female aid workers were shot to death in a Taliban ambush in Logar province, only about an hour’s drive south of Kabul.

The initial ambush on a patrol of elite French reconnaissance forces in the Sarobi district of Kabul province took place late Monday and the fighting continued into Tuesday, NATO’s International Security Assistance Force said in a statement. It said about 100 insurgents took part.

Operations involving large numbers of militants are a tactical departure for the insurgents, who generally have eschewed large-scale frontal assaults in favor of smaller hit-and-run attacks that allow them to melt away when NATO troops use their greatly superior firepower.

The high toll among the French forces occurred despite the quick deployment of reinforcements, including close air support and mobile medical units. Western military officials said a “large number” of insurgents were killed in the battle, but declined to provide a more specific figure.

In France, the loss of so many elite troops at one time dominated headlines and galvanized politicians.

French President Nicolas Sarkozy and Defense Minister Herve Morin immediately boarded a plane for Afghanistan. Sarkozy attended a memorial service this morning and visited the wounded, then meet with military commanders and Karzai, according to a statement from the presidential palace.

French forces, who first came to Afghanistan in 2002, had until now suffered relatively light casualties, compared with U.S., British and Canadian troops, who are deployed in the most dangerous areas, in the south and east.

Since the U.S.-led invasion, 934 coalition troops have lost their lives, 578 of them American, according to the website icasualties.org. So far this year, 185 coalition troops (103 American) have died.

France has lost a total of 22 troops, Britain 116 and Canada 90. Several other nations have lost troops, including 25 from Germany and 23 from Spain.

The French losses represented the largest number of Western troop fatalities in a single incident in Afghanistan in more than three years. The only larger clusters of foreign military fatalities since the conflict began have involved downed aircraft.

The Taliban leadership, which generally has a sophisticated grasp of the domestic political situation in nations that provide troops to the North Atlantic Treaty Organization force, has sometimes specifically targeted troops from countries in which they believe there is significant opposition to the Afghanistan mission.

Sarkozy drew domestic criticism from both the left and far right for his decision to send 700 additional French troops soon to Afghanistan, bringing the French contingent to more than 2,500.

Adding an emotionally difficult dimension to military authorities’ account of the battle, the Associated Press quoted an Afghan official who spoke on condition of anonymity as saying four of the French soldiers were taken prisoner by the insurgents and then killed. But French officials later said nearly all the deaths were thought to have occurred in the first few moments of the ambush.

The area where the fighting took place is known to be a stronghold of Gulbuddin Hekmatyar, a veteran Taliban- allied commander with a reputation for brutality. He is believed to be based in Pakistan’s tribal areas.

The attack against the U.S. base in the city of Khowst, near the Pakistan border, was described by military officials as involving a team of suicide bombers who stormed the gates of the base, a large and well-fortified logistical hub known as Camp Salerno.

The same base had been targeted a day earlier by a suicide car bomber. The vehicle blew up at the outer entrance to the base, killing 12 Afghan workers waiting to enter.

In its intensity and degree of coordination, Tuesday’s assault in Khowst was reminiscent of an attack last month by insurgents against a U.S. base on the border of the eastern provinces of Kunar and Nuristan. Nine U.S. troops were killed in that confrontation, and the outpost was nearly overrun.

In Tuesday’s fighting at Khowst, NATO brought in air power, including fighter aircraft and helicopter gunships, to help troops inside defend the base.

It was thought to be the first time such a large number of suicide bombers had taken part in a single assault. News agencies quoted a Taliban commander as saying more suicide bombers than the half-dozen who died had been at the ready, but withdrew to a safe house when it became clear they could not penetrate the base’s perimeter defenses.