The Foundation of the US: God and Guns?

I didn’t exactly come away from my studies of early American history believing that God and guns were founding principles. It’s a fair perversion of those principles that this fellow exhibits. And I’d bet he has thousands (or millions?) who buy it. God and guns – mmmm …. 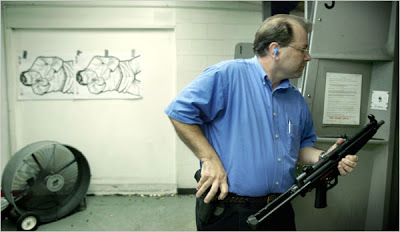 LOUISVILLE, Ky. — Ken Pagano, the pastor of the New Bethel Church here, is passionate about gun rights. He shoots regularly at the local firing range, and his sermon two weeks ago was on “God, Guns, Gospel and Geometry.” And on Saturday night, he is inviting his congregation of 150 and others to wear or carry their firearms into the sanctuary to “celebrate our rights as Americans!” as a promotional flier for the “open carry celebration” puts it.

“God and guns were part of the foundation of this country,” Mr. Pagano, 49, said Wednesday in the small brick Assembly of God church, where a large wooden cross hung over the altar and two American flags jutted from side walls. “I don’t see any contradiction in this. Not every Christian denomination is pacifist.”

The bring-your-gun-to-church day, which will include a $1 raffle of a handgun, firearms safety lessons and a picnic, is another sign that the gun culture in the United States is thriving despite, or perhaps because of, President Obama’s election in November.

Last year, the National Rifle Association ran a multimillion-dollar advertising campaign against Mr. Obama, stoking fears that he would be the most antigun president in history and that firearms would be confiscated. One worry was that a Democratic president and Congress would reinstitute the assault-weapons ban, which expired in 2004.

But there is little support for the ban. Mr. Obama and his party have largely ignored gun-control issues, and the president even signed a measure that will allow firearms in national parks.

Still, the fear remains that Mr. Obama, and his attorney general, Eric H. Holder Jr., will crack down on guns sooner or later. That — along with the faltering economy, which gun sellers say has spurred purchases for self-defense — has fueled a record surge in gun sales.

“Every president wants to be re-elected, and gun bans are pretty much a nonstarter for getting re-elected,” said Win Underwood, owner of the Bluegrass Indoor Range here. “What I suspect is going to happen is, Obama’s going to cool his jets until he can get re-elected, and then he’ll start building his legacy in these hot-button areas.”

The National Rifle Association says its membership is up 30 percent since November. And several states have recently passed laws allowing gun owners to carry firearms in more places — bars, restaurants, cars and parks.

“We have a very active agenda in all 50 states,” said Chris W. Cox, legislative director of the N.R.A., widely considered the country’s most powerful lobby. “We have right-to-carry laws in over 40 states; 20 years ago, it was in just six.”

Of the 40 states with right-to-carry laws, 20 allow guns in churches.

Gun-control advocates say they feel increasingly ineffective, especially after a recent spate of high-profile shootings, including last month’s murder, inside a church in Kansas, of a doctor who performed late-term abortions.

“We’ve definitely been marginalized,” said Pam Gersh, a public relations consultant here who helped organize a rally in Louisville in 2000, to coincide with the Million Mom March against guns in Washington.

“The Brady Campaign and other similar organizations who advocate sensible gun responsibility laws don’t have the money and the political power — not even close,” she said. “This pastor is obviously crossing a line here and saying ‘I can even take my guns to church, and there is nothing you can do about it.’ ”

Ms. Gersh said she was not aware that a group of local churches and peace activists were staging a counterpicnic — called “Bring your peaceful heart, leave your gun at home” — at the same time as Mr. Pagano’s event.

But news media attention — some from overseas — has focused on Mr. Pagano, who has been planning the event for a year, in celebration of the Fourth of July. Cameras will not be allowed in the church, he said, to protect the congregation’s privacy.

The celebration will feature lessons in responsible gun ownership, Mr. Pagano said. Sheriff’s deputies will be at the doors to check that openly carried firearms are unloaded, but they will not check for concealed weapons.

“That’s the whole point of concealed,” Mr. Pagano said, adding that he was not worried because such owners require training.

Mr. Pagano said the church’s insurance company, which he would not identify, had canceled the church’s policy for the day on Saturday and told him that it would cancel the policy for good at the end of the year. If he cannot find insurance for Saturday, people will not be allowed in openly carrying their guns.

Arkansas and Georgia recently rejected efforts to allow people to carry concealed weapons in church. Watching the debate in Arkansas was John Phillips, pastor of the Central Church of Christ in Little Rock. In 1986, Mr. Phillips was preaching in a different church there when a gunman shot him and a parishioner. Both survived, but Mr. Phillips, 51, still has a bullet lodged in his spine.

In a telephone interview, he said he found the idea of “packing in the pew” abhorrent.

“There is a movement afoot across the nation, with the gun lobby pushing the envelope, trying to allow concealed weapons to be carried in places where they used to be prohibited — churches, schools, bars,” Mr. Phillips said.

“I don’t understand how any minister who is familiar with the teachings of the Bible can do this,” he added. “Jesus didn’t say, ‘Go ahead, make my day.’ ”

Mr. Pagano takes such comments as a challenge to his faith and says they make him more determined.

“When someone from within the church tells me that being a Christian and having firearms are contradictions, that they’re incompatible with the Gospel — baloney,” he said. “As soon as you start saying that it’s not something that Christians do, well, guns are just the foil. The issue now is the Gospel. So in a sense, it does become a crusade. Now the Gospel is at stake.”

1 Response to The Foundation of the US: God and Guns?