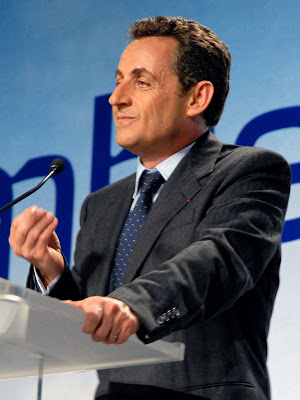 Future of France: This? 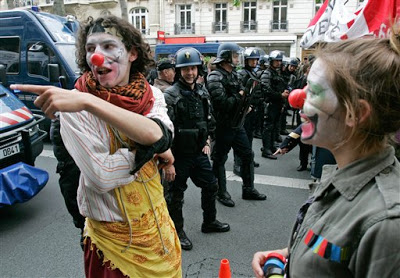 Or this? Photo by Michel Euler / AP.
Liberty? Equality? Fraternity?
Is this the Future of France?

On the surface France this summer seems like a relatively tranquil society, but under the surface there are disquieting signs of trouble and unrest. They could easily become more apparent as the global economic crisis deepens.

TOULOUSE, France — On July 4 at a Saturday night party near Toulouse, France, a 31-year-old French writer named Julian insisted on telling me his view of France. His English was not perfect, but it was good enough to say what he wanted to say and what he wanted to say was emphatic and unambiguous. “It’s all shit,” he told me. “The future is now and there is no future for us. None at all.”

His is a point of view I have heard before in France over the last 50 or so years that I have visited here. It is a feeling that is especially prevalent now in France and among the young because young people are hard-hit by unemployment and because they detest the government of Sarkozy. Julian’s girl friend, who has a Ph.D. in biology and has been unable find a work, is bitter and resentful.

“The people who get jobs now get them because of family connections and not because they have experience or qualification,” she said. “The corruption is an atrocity.” A few days later at a lunch in Aix-en-Provence I met a middle-aged woman named Isabelle who works for the French National Assembly and who has expertise in the field of labor law. I mentioned the views I had heard on July 4 and asked if they were exceptional. “Many people are angry now in France,” she said. “It is not a good time to be young, to be looking for work and for a future.”

On the surface France this summer seems like a relatively tranquil society, but under the surface there are disquieting signs of trouble and unrest. They could easily become more apparent as the global economic crisis deepens.

France is of course not as large or as populous a country as the United States and its contradictions are not as earth-shaking as those in the U.S. but it is still a country of immense contradictions and those contradictions make France a complex place. Outside every school in France, one sees emblazened the words of the French Revolution, “Liberty, Equality and Fraternity.” And almost everywhere one looks — in schools, in the work place and elsewhere — one sees the absence of “Liberty, Equality, and Fraternity.” The gap between the ideals and the realities can make France seem like a place of pure hypocrisy, especially to the young, and it is not surprising that they have been protesting.

This past spring Paris students went on strike to express their opposition to the Sarkozy government’s plans to make education more accountable to the marketplace. To Julian, to his girlfriend and to many of the young French men and women I have met here, France seems to have already become a corporate society in which old, traditional ways are quickly vanishing. Indeed France feels more and more like everyplace else, with fast food, internet cafes, grafitti, tattoos, and big cars. It is more like the United States now probably than at any other time in its history. Michael Jackson’s death — and his life and his career — have been the biggest news event this summer in France, bigger even than the Tour de France, the famed bicycle race.

But there is another side to the story than the Americanization of France. France is still uniquely French, with its own language, food, culture and traditions, and there are French citizens who still genuinely believe in “Liberty, Equality, Fraternity.” France is very much a part of Europe, determined to go its own way in the world, and to uphold its regional ways and regionalism, from Brittany to Provence. And if the French admire the United States it is often for aspects of America that are not part of mainstream culture such as jazz, film noir and the Beat Generation writers. Moreover, the French have a remarkable ability to absorb cultures from around the world and to retain their own national character. Where else in the world would one find a restaurant; for example named “La Madeline de Proust?” Where else would people get the literary reference?

After a day with Julian in Toulouse visiting libraries, bookstores, churches and an old building that was the headquarters for the Gestapo in World War II — and that now houses the tax office — I apologetically said that I still had illusions about France. The previous day I had visited Albert Camus’s grave. Instead of placing flowers there I picked the flowers of the lavender that were blooming. I allowed myself to think that Camus would have approved of an American — who once thought of himself as an existentialist and who still admired the French existentialistd for their anti-fascism — picking flowers from his grave. Julian looked at me and smiled. “I am glad that someone still has illusions about France,” he said. “Someone has to believe in the France of Camus and Sartre and DeBeauvoir. We’re going to need those beliefs if we’re going to survive the rough times ahead.”

[Jonah Raskin is the author of Field Days and The Mythology of Imperialism.]

This entry was posted in Rag Bloggers and tagged Europe, France, Youth. Bookmark the permalink.

1 Response to The Future of France : Still ‘Liberty? Equality? Fraternity?’