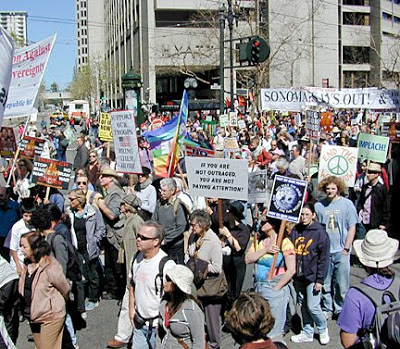 On November 4, San Franciscans will vote on the strongest anti-Iraq War measure yet to appear before the voters of a major American city. Proposition U, placed on the ballot by five of the city’s Board of Supervisors, declares it city policy that “its elected representatives in the United States Senate and House of Representatives should vote against any further funding for the deployment of United States Armed Forces in Iraq, with the exception of funds specifically earmarked to provide for their safe and orderly withdrawal.”

San Francisco was the site of some of the nation’s largest protests leading up to the war, culminating in over 1,000 arrests for blocking the streets on the day of the invasion. And in 2004, 63 percent of its voters backed a policy statement urging the federal government “to withdraw all troops from Iraq and bring all military personnel in Iraq back to the United States.” But with more American troops there today than on the day when San Francisco’s voters last spoke on the issue, it seemed time to go to the polls again, particularly since, in the words of the Supervisors’ ballot argument, “San Francisco has struggled to fund its schools, meet the health care needs of its citizens, and provide safety on its streets,” while the Iraq War has cost “the city of San Francisco alone $1.8 billion.”

As a local advisory measure (voters cannot compel their congressional representatives to vote as directed) on a national issue, Proposition U was conceived with one eye on San Francisco and the other on Washington, D.C. The city’s congressional delegation has never adequately reflected the depth of local antiwar feeling. The late Tom Lantos, who represented the city’s west side, was a flat-out war supporter. (Jackie Speier, his successor of only four months will not likely continue his hawkish stance.) The city’s more prominent Representative, House Speaker Nancy Pelosi, has been a more complicated case. Along with the majority of House Democrats, she voted against the war at the outset, then voted to fund it, proclaiming that “Democrats will never cut off funding for our troops when they are in harm’s way.”

Although Pelosi has since cast votes against war funding and was even recently joined by the generally hawkish California Senator Diane Feinstein (Senate colleague Barbara Boxer has been considerably better on the war), the scenario most favorable to antiwar forces portends votes on war funding that all of the city’s representatives in Washington may find significantly harder to resist. Since Barack Obama has never prattled on about envisioning American troops in Iraq for the next hundred years like John McCain, his election at least offers the hope of ending the occupation within the twenty-first century. The fact, however, is that Obama’s plan calls for “combat troops” remaining there sixteen months into his administration, with perhaps tens of thousands of so-called “non-combat troops” staying on indefinitely. Most congressional Democrats will need a lot of antiwar wind at their backs to resist requests for military appropriations in Iraq emanating from an Obama White House.

While aspiring to provide at least a gust to buoy the antiwar spirit of the local congressional delegation, Proposition U is also designed as a bit of an antidote to a type of magical thinking that seems to have come over some of the nation’s war opponents ever since their massive protests failed to stop the war. In 2004, this thinking took the form of believing that all that was necessary to end the war was to elect John Kerry, largely ignoring his have-it-both-ways stance of condemning Bush both for starting the war and for not sending enough troops. (The Administration’s “surge” has belatedly addressed the latter concern.)

In 2006, it was the drive to vote a Democratic majority into Congress that seemed to supplant the need for direct antiwar activity in the minds of many. This, although there was no genuine prospect of a simple Democratic majority providing the votes needed to end the war, given that a third of House Democrats have supported it. And, in 2008, the wish-the-war-away strategy appears to amount to electing Obama and hoping that he’ll do what his antiwar constituency wants him to do, even if he’s never said he would.

There is one way that the starry-eyed Obama fans have it right, though. What Obama’s supporters believe does matter. It matters a lot, but only insofar as they make him know they expect him to act on their beliefs, and do so loudly, publicly, and defiantly, if need be. For the fact is that even if Obama’s Iraq plan were far better than it is and his foreign policy team were not full of status quo types, these factors would not diminish the intense pro-war pressure he will feel if he is elected. Any Democrat in the White House can assume both a Republican drumbeat of accusations about undercutting our armed forces and selling out an ally as well as a steady stream of “stay the course” pronouncements — like the recent New York Times opinion piece, “Not Quite Ready to Go Home” — from supposedly neutral foreign policy establishment types.

Getting the Republicans out of the White House may be a necessary condition for ending this war, but it is far from a sufficient one. Hopefully, on election day, by voting in Proposition U, the voters of San Francisco will present the newly elected President with a real peace plan and remind both their representatives and the nation of the simple fact that the Iraq War will end on the day we stop paying for it.

Tom Gallagher is an antiwar activist living in San Francisco. Reach him at TGTGTGTGTG@aol.com.

This entry was posted in RagBlog and tagged Electoral politics, Peace Movement. Bookmark the permalink.