The Man Hiding Behind the Mask of War Hero 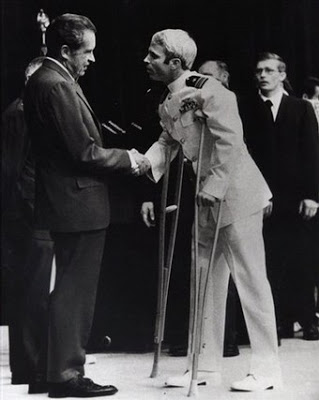 Did you know that when John McCain was away from home for extended periods of time working as a U.S. Senator, Mrs. Cindy McCain would tell her children with his acquiescence that he was “deployed” and imagined herself just another lonely – albeit very, very wealthy – naval wife?

As a military wife and daughter I don’t think living in D.C. – wining and dining lobbyists – is the equivalent of deployment to Afghanistan, Iraq or Vietnam.

Why is this story worth repeating? The Cinderella quality of such imaginings provides a telling context – revealing the man and his presumptions hiding behind the mask of war hero.

In this election season, understanding the full context of presumptions is very important. My husband, also a former Vietnam Prisoner of War (1970-1973), spent time in both the “Hanoi Hilton” and a secondary camp -“Plantation Gardens” – as did John McCain who never mentions time spent in the latter. I am also the daughter of Colonel John F. O’Grady who was known to be a POW captured on the border of Laos and Vietnam in 1967 and who never returned. Like John McCain, John O’Grady was a graduate of the U.S. Naval Academy (1952). John O’Grady earned 7 military commendations for heroic service including the Silver Star and two Distinguished Flying Crosses.

There were many heroes in Vietnam – and there are many freshly bloodied heroes returning from new wars started by old men – and John McCain’s claim is tarnished by long forgotten historical facts that few are brave enough to proffer today for fear of vicious attack on their “patriotism”. My father’s legacy protects me from such attack and so demands that I ask the unspoken questions and remind voters of the forgotten history. When the Vietnam POWS came home in 1973, President Nixon traded a small group of them celebrity status – anointing them as “heroes” – for political support of his failed war policies. John McCain was one of the anointed heroes while others were virtually discarded in exchange for their continued support of the false Nixon plan of “peace with honor” in Vietnam.

Politics can magnify or ignore heroism as it suits. In turn, the select POWS were introduced to very wealthy and influential members of the Republican Party, their records were elevated over other POW heroes with more compelling stories, and many difficult questions were not asked of them.

Today, some of those same POWS are employees of the neo-conservative American Enterprise Institute and many others have profited greatly from their staunch affiliations within the Republican Party.

In 1973, “patriotism” was traded like a commodity and heroes were used as political props. Essentially, the architects of both Vietnam and Iraq (Cheney, Rumsfeld, et. al.) launched a highly successful propaganda campaign (remember the Private First Class Jessica Lynch POW shameful sequel) using Vietnam POWS – at least the ones that were willing to be used wittingly or unwittingly – in an attempt to prop up the failing Nixon administration. Yet, if Mr. McCain is now intent on running on his character and his war record almost – because he has nothing else to offer – while suggesting that others do not care about their country as much as he does – then the wife and daughter of two other Vietnam heroes has a few questions for him:

In the interest of full disclosure why do you refuse to release your Department of Defense POW debriefing?

In the interest of full disclosure why have you failed to release all military medical records including psychological studies – 1973-1993?

Why do you only reference the time spent as a prisoner in the Hanoi Hilton”?

When will you provide details about the time spent in the prison referred to as “Plantation Gardens”?

Did you ever receive any preferential or atypical treatment while a POW in any location where you were held? How soon and when did you reveal your true identity to your Vietnamese captors – did you simply give name, rank and serial number?

Has any other former Vietnam Prisoners of War or Vietnam veteran questioned the record that you claim particularly your claims of “torture”?

What was your connection to the “Peace Committee”?

Have you ever lost your temper with military families who challenged your position?

Have you ever acted in an inappropriate way or in a less than gentlemanly manner with any female spouse of any active duty military personnel member?

Why not let citizens, who know the personal and painful history better than anyone else, ask the questions? Why not let these questions prompt more thorough investigation and scrutiny and less shilling by the press? Why shouldn’t change really mean accountability as framed by ordinary people who also made an extraordinary sacrifice? The answers might provide all citizens the context needed to fully judge some less than credible claims that have aged into myths over time.

There is always the context to consider…

[Patty O’Grady, Ph.D., teaches in the Department of Education at the University of Tampa.]