The Most Trusted Man in America 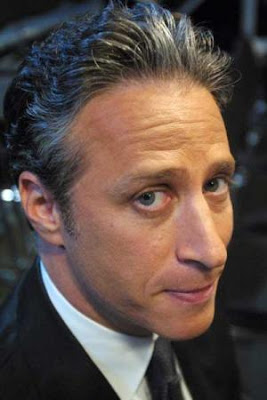 You can’t be serious: How a comedian became the most influential voice in American politics
by Leonard Doyle / August 19, 2008

When Jon Stewart inaugurated his fake news anchor on The Daily Show eight years ago, his goal was to send up the hyperbolic and manufactured controversy of US Cable News and, if possible, be even more outrageous. Now, in a wonderful through-the-looking-glass moment, he has supplanted the subjects of his mockery in the country’s current affairs consciousness, and finds himself crowned the bemused voice of reason in an insane world.The underground comic has become such a cultural touchstone that The New York Times asked this week whether he has become “the most trusted man in America”.

For anyone who has missed the influential anchor, then his take on the way mainstream media peddles false rumours about Barack Obama is instructive. He calls it “Baracknophobia” and shows clips of blow-dried anchors and experts repeating widely-believed but baseless rumours – that the Democrat is actually a secret Muslim, a plagiarist, a misogynist etc. The purveyor of fake news lacerates the networks’ talking heads as they blame the internet for rumour mongering about Obama.

The highlight is a straight-faced Mr Stewart saying: “Oh, this is interesting. SomeguyI’veneverheardof.com is reporting presumptive Democratic nominee Barack Obama has lady parts. Obviously scurrilous and unfounded, we’ll examine it tonight in our special, ‘Barack Obama’s Vagina: The October Surprise In His Pants’.”

The latest sign of how far the show and its host have come from their edgy early days will come at the Democratic Convention in Denver, where he and his reporters are fully accredited.

When asked last year by the Pew Research Centre to name the journalist they most admired, Americans placed the fake news anchor Mr Stewart at number four on the list. He was tied with such luminaries as Tom Brokaw of NBC, Dan Rather, then of CBS, and Anderson Cooper of CNN.

The Daily Show and the equally funny and successful Colbert Report shows are broadcast more than 23 times a week, “from Comedy Central’s World News Headquarters in New York”. The side-street studio on Manhattan’s West Side is not only the undisputed locus of fake news, but it is increasingly the epicentre of real news – administered with a wrapping of college humour.

The whispered advice of a State Department spokesman to a foreign correspondent trying to make sense of American politics was very simple: tune into The Daily Show. “I watch the reruns every morning at 10.30,” she said, “it’s the only way to find out what’s really going on.”

The Conflict in Georgia

The Daily Show is also a top priority for ambitious politicians and was described by Newsweek as “the coolest pit stop on television” for presidential candidates, world leaders and ex-presidents. While mainstream news gave an even-handed report on the legacy of the Blair-Bush years after Tony Blair’s farewell visit to Washington last year, The Daily Show tore Mr Blair to ribbons.

One of the programme’s signature techniques – of using video montages showing politicians contradicting themselves – is now a staple technique of mainstream news shows.

Nor is The Daily Show afraid of tackling what it calls “super depressing” stories, such as President George Bush’s decision to approve the use of torture after the September 11 attacks and the unprecedented concentration of executive power by the White House. Interviews with serious authors such as Seymour Hersh have helped focus attention on potentially illegal acts by the Bush administration and win a wider audience for their work.

Mr Stewart’s frequent outbursts of “Are you insane?!” seems to capture the post-M*A*S*H, post-Catch-22 sensibilities of a country that waged a war in Iraq to find weapons of mass destruction that did not exist. Now, with the most promising candidate in generations running for president, Mr Stewart asks whether the country may be about to reject him at the ballot box because of rumours that he is Muslim.

The purpose of The Daily Show is to entertain, not inform, Mr Stewart insists, and he likens his job to “throwing spitballs” from the back of the room. But he and the high-powered writers who work with him like nothing better than tackling the big issues of the day – in ways that straight news programs cannot.

“Hopefully, the process is to spot things that would be grist for the funny mill,” Mr Stewart, 45, told The New York Times. “In some respects, the heavier subjects are the ones that are most loaded with opportunity because they have the most … potential energy, so to delve into that gives you the largest combustion, the most interest. I don’t mean for the audience. I mean for us.”

The Daily Show’s success comes from blending the informality and attitude of bloggers with the hard-nosed research and expertise of the best investigative reporters to reveal a new news medium. Like bloggers, a key to his show’s success is the authenticity that comes from in-depth reporting, combined with stating the blindingly obvious.

Every day begins with a morning meeting where material culled from 15 video recorders, as well as newspapers, magazines and websites, is pored over. The meeting, Mr Stewart says, “would be very unpleasant for most people to watch: it’s really a gathering of curmudgeons expressing frustration and upset, and the rest of the day is spent trying to … repress that through whatever creative devices we can find”. Josh Lieb, one of the executive producers of the show, describes the process as looking for stories that “make us angry in a whole new way”.

By 3pm a script has been prepared and Mr Stewart’s rehearsals begin. After an hour of rewrites, taping the show starts at 6pm.

The fake news anchor may be the antidote to fake news, which has a habit of showing up in American newspapers. After all, the US government had an initiative in 2005 to plant “positive news” in Iraqi newspapers to sway public opinion about the war. The Bush administration has worked closely with big business to keep it flowing.

According to Professor Robert Love, of Columbia Journalism School: “They have used fringe scientists and fake experts to muddy scientific debates on global warming, stem-cell research, evolution, and other matters.”

For all his fakery, Mr Stewart may be pointing the way to the future of news: bluntness and informality fused with ruthless editing and a funny bone which helps to ensure that stories he wants to cover are watched.

Source, including a couple more videos / The Independent

1 Response to The Most Trusted Man in America