The Navajo Nation and Uranium Mining: Not a Happy Combination 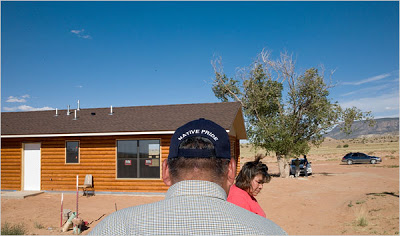 TEEC NOS POS, Ariz. — It was one year ago that the environmental scientist showed up at Fred Slowman’s door, deep in the heart of Navajo country, and warned that it was unsafe for him to stay there.

The Slowman home, the same one-level cinderblock structure his family had lived in for nearly a half-century, was contaminated with potentially dangerous levels of uranium from the days of the cold war, when hundreds of uranium mines dotted the vast tribal land known as the Navajo Nation. The scientist advised Mr. Slowman, his wife and their two sons to move out until their home could be rebuilt.

“I was angry,” Mr. Slowman said. “I guess it was here all this time, and we never knew.”

The legacy wrought from decades of uranium mining is long and painful here on the expansive reservation. Over the years, Navajo miners extracted some four million tons of uranium ore from the ground, much of it used by the United States government to make weapons.

Many miners died from radiation-related illnesses; some, unaware of harmful health effects, hauled contaminated rocks and tailings from local mines and mills to build homes for their families.

Now, those homes are being demolished and rebuilt under a new government program that seeks to identify what are very likely dozens of uranium-contaminated structures still standing on Navajo land and to temporarily relocate people living in them until the homes can be torn down and rebuilt.

Stephen B. Etsitty, executive director of the Navajo Nation Environmental Protection Agency, and other tribal officials have been grappling for years with the environmental fallout from uranium mining.

“There were a lot of things people weren’t told about the plight of Navajos and uranium mining,” Mr. Etsitty said. “These legacy issues are impacting generations. At some point people are saying, ‘It’s got to end.’ ”

After a Congressional hearing in 2007, a cross-section of federal agencies committed to addressing the environmental and health impacts of uranium mining on the reservation. As part of that commitment, the federal Environmental Protection Agency and the Navajo Nation began working together to assess uranium levels in 500 structures through a five-year plan set to end in 2012.

Using old lists of potentially contaminated structures, federal and Navajo scientists have fanned out to rural reaches of the 27,000 square mile reservation — which includes swaths of Arizona, New Mexico and Utah — to measure levels of radium, a decay product of uranium that can cause lung cancer. Of 113 structures assessed so far, 27 contained radiation levels that were above normal.

“In these situations, you have contamination in somebody’s yard or in their house,” said Harry Allen, the E.P.A.’s section chief for emergency response in San Francisco who is helping lead the government’s efforts. “To us, that is somewhat urgent.”

Many structures that showed high levels of radiation were vacant; some families had already moved out after hearing stories of contamination in their homes. But eight homes still had people living in them, and the E.P.A. and Navajo officials have worked to convince residents that it would be unsafe to stay. 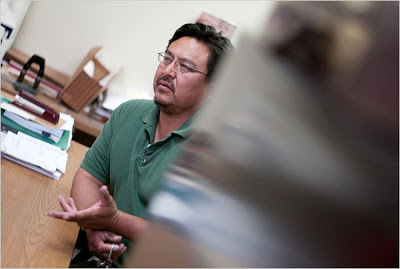 “There were a lot of things people weren’t told about the plight of Navajos and uranium mining,” Stephen B. Etsitty said. Photo: Kevin Moloney for The New York Times.

“People had been told they were living in contaminated structures, but nobody ever did anything about it,” said Will Duncan, an environmental scientist who has been the E.P.A.’s main representative on the reservation. “They would tell us, ‘We don’t believe you are going to follow through.’ ”

But with a budget of nearly $8 million, the E.P.A. has demolished all 27 contaminated structures and has begun building ones to replace those that had been occupied. Typically, the agency pays a Navajo contracting company to construct a log cabin or a traditional hogan in the structure’s stead, depending on the wishes of the occupants. Mr. Allen said the cost, including temporarily relocating residents, ran approximately $260,000 per dwelling and took about eight months.

The agency also offers $50,000 to those who choose not to have an old home rebuilt.

Lillie Lane, a public information officer with the Navajo Nation E.P.A. who has acted as a liaison between the federal government and tribal members, said the program held practical and symbolic importance given the history of uranium mining here.

Ms. Lane described the difficulty of watching families, particularly elders, leaving homes they had lived in for years. She told of coming upon two old miners who died before their contaminated homes could be rebuilt. “In Navajo, a home is considered sacred,” she said. “But if the foundation or the rocks are not safe, we have to do this work.”

Some families, Ms. Lane said, complained that their children were suffering from health problems and had wondered if radiation were to blame.

The E.P.A. has started sifting through records and interviewing family members to figure out whether mining companies that once operated on the reservation are liable for any damages, Mr. Allen said.

On a recent summer day, Fred and Clara Slowman proudly surveyed their new home, a one-level log cabin that sits in the quiet shadows of Black Rock Point, miles away from the bustle of Farmington, N.M., where the family has been living in a hotel.

Mr. Slowman said he suspected that waste materials from a nearby abandoned mine seeped into his house. The family plans on having a traditional Navajo medicine man bless their dwelling before they move in.

“In our traditional way, a house is like your mom,” he said. “It’s where you eat, sleep, where you’re taken care of. And when you come back from the city, you come back to your mom. It makes you feel real good.”

1 Response to The Navajo Nation and Uranium Mining: Not a Happy Combination