The Next Decade Will Be All About "Deregulation"

Maybe we all heard it wrong; it’s not the NEW world order – it’s the NAU World Order aka “North American Union”….. 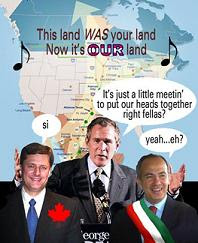 Unfortunately, democratic rights in Canada are quickly becoming an illusion. In a sinister plot being carried out underneath our noses, the Canadian government has been working collectively with Mexico and the United States to create the conditions for a merger into a North American Union (NAU). To date, there has been absolutely no public participation concerning this merger.

The plot will thicken even more on August 20-21 when George Bush and Felipe Calderon, the presidents of the United States and Mexico, meet Stephen Harper at the Fairmont Hotel in Montebello, Quebec. Further planning and analysis of the Security and Prosperity Partnership (SPP), an informal agreement signed by the leaders of the three countries in 2005, will command center stage.

If Canadians understood the substance of the SPP they would be appalled since it is a direct threat to the existence of Canada as a sovereign country. Internal SPP documents released under FOI requests have shown that U.S. administrative law is being written in stealth to “integrate” and “harmonize” 100’s of regulations in Canada and Mexico.

Government leaders, the corporate elite and senior bureaucrats have been meeting secretly for the past 2 years to “fast track” the eventual rollout of the NAU by 2010.

The big question is: why hasn’t the Canadian government used the parliamentary process and the media to inform its citizens regarding the looming NAU?

You are forced to conclude that the mainstream media is guilty of collusion with government and corporate executives and has failed to report the context of the NAU and the implications for the future of Canada.

Essentially, the SPP lead up to the NAU is the sequel to the Free Trade Agreement and we all remember the Mulroney promises of 1989. We were to have more jobs, more prosperity, more investment and the middle class and the working class would benefit, right? Wrong. Many of the jobs and companies went south, unemployment rose, Canadian companies suffered takeovers, but the political pundits keep talking about the increased wealth in North America.

Yes, it’s true that there has been a huge increase in the number of millionaires and billionaires in North America today but what about the rest of us? The multinational corporations have done just fine, and now they are the ones who will be sitting down at conference tables in Montebello with presidents and a prime minister- changing the rules to suit themselves while no media or citizens’ groups will be allowed to observe or participate!

If you doubt this scenario will occur on August 20, I remind you that there was a blackout on media coverage at a previous SPP conference, in Banff, Alberta from September 12-14, 2006 after which Stockwell Day, Minister of Public Safety refused to answer any questions regarding the conference in the foyer of the House of Commons. Apparently, that conference in Banff was so secretive that the Canadian public did not have the right to learn about it.

A full discussion of the SPP is beyond the scope of this article but it is important to remember that the next decade will be all about “deregulation.” It will mean that the protections of government on which we have come to rely, will vanish into thin air. Future generations, our children and grandchildren, will ask us why we fell asleep at the switch and failed to hold our governments accountable.

The United States will become our model. Privatization and deregulation of: health care and drug safety, road construction and transportation, environmental, energy, forestry and agriculture regulations are just a few of the areas where government will abdicate its constitutional responsibility to us.

Once the corporations and government carry out this fascist coup d’etat, we can predict the results- increased prices, decreased wages and a gaping hole in our social safety net like we never imagined. It will bring an end to the middle class in Canada and bring about a huge increase in the ranks of the working poor. It will lead to a “Walmartization” of the economy.

Maude Barlow, in her recent book, “Too Close for Comfort” presents all of the frightening details of “Canada’s future within Fortress North America.”

To add insult to injury, the planners of the Montebello conference, according to Connie Fogal of the Canadian Action Party, have affirmed that U.S. troops will be coordinating security arrangements at Montebello, which include a $1 million fence to keep the expected 10,000 protesters 25 kilometers away from the secretive meeting of three so-called democracies.

George Orwell once said: “If you want a vision of the future, imagine a boot stamping on a human face- forever.”

The boot of the North American Union is only 3 years from our face right now and we need to put tremendous pressure on our Canadian government to unveil its intentions, reveal its secrets and come clean.

2 Responses to The Next Decade Will Be All About "Deregulation"